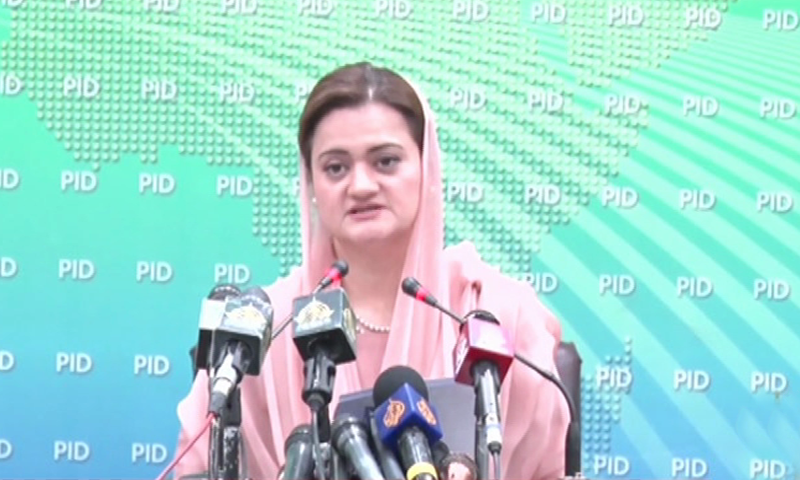 Information Minister Marriyum Aurangzeb on Wednesday said it was the public, not the media, that was "blacking out" former prime minister Imran Khan.

Addressing a press conference in Islamabad, she said when the Pakistan Electronic Media Regulatory Authority (Pemra) was asked for data regarding which channels were restricted from covering the PTI's activities, the body said no such information was available.

"It is the public of Pakistan that is blacking you out from politics," she added.

The information minister was responding to Imran's remarks at a workers' convention in Lahore during which he lambasted the purported media blackout of the PTI on mainstream TV channels and questioned why the defenders of press freedom were not standing up against it.

"During our stint in power, 80 per cent of the programmes were against our government. So why is there a media blackout now?" he asked.

During her presser today, Marriyum responded that during the PTI's tenure, journalists were roughed up, shot at and jailed while their programmes were forced off-air.

"In whose time was the [new] media regulatory authority being set up?" she asked while referring to the Pakistan Media Development Authority (PMDA) that was "disbanded" by the coalition government shortly after coming to power.

When the media houses had refused to be influenced by the PTI government's thuggery, they were pressured financially.

The incumbent government did not believe in censorship and Pemra was always independent during PML-N's governments, she said.

"You cannot do politics by lying. You are being blacked out by the people of Pakistan [because of] your performance."

'Elections to be held on due time'

Referring to Imran's speech at a workers' convention today, Aurangzeb likened the "repetition" to that of a cassette, quipping that the PML-N government could provide the former prime minister with a "good speechwriter".

Imran had clung to power for four years, she said, adding that while his party had claimed PML-N leaders had stashed their wealth abroad, the money that should have been recovered was nowhere to be found.

"Why did you not prove [PML-N leaders'] corruption? When the DG FIA (Federal Investigation Agency) said cases could not be made, you (Imran) formed the Assets Recovery Unit. Not a single allegation was proved and you should be ashamed of levelling them again."

The money allegedly stashed abroad could not be brought back by the PTI government because the allegations were false, she said, adding that Imran was still repeating them because his own performance was "zero".

The former premier should have resigned instead of clinging to power, she said, asking why the PTI was calling for early elections when the Election Commission of Pakistan (ECP) questioned it about its funding.

Elections would happen as per schedule, she said. "Imran Khan is not afraid of elections but of Shehbaz Sharif's performance. He knows that sugar has come down to Rs70 per kg, people are going from Peshawar Mor to Islamabad Airport honourably (on the Metro bus), the 27 power plants that were not functioning earlier are working again.

The PTI was only afraid of Shehbaz's popularity, she stated, asserting that elections would be held as per schedule.

Aurangzeb shared that Prime Minister Shehbaz Sharif directed for the National Action Plan (NAP) to be revisited following the suicide attack inside Karachi University yesterday, in which four people, including three Chinese nationals, were killed.

In addition, the prime minister had issued directives to immediately summon a meeting of National Count­e­­r­terrorism Authority (Nacta) to review the NAP in consultation with provinces.

Responding to a question, the information minister said there was no political instability in the country and the government was working peacefully. "The government is giving happiness to the public that spent the last four years aggrieved."

Those spreading hate are not in power, she said, stressing that the government would ensure Pakistan's prosperity on the diamond jubilee of the country's formation.

Today24.pro
High school scoreboard: Saturday’s NCS, CCS, CIF results in baseball, softball, volleyball, lacrosse, tennis Why are eating disorders so hard to treat? - Anees Bahji The ONLY 3 Upper Body Exercises You Need for Mass #1 Backyard Weed That Can Replace ALL Your Medications