ERLING HAALAND is ‘smart enough’ to realise Manchester United is a better move to make than joining fierce rivals City.

That is the opinion of former Red Devil Louis Saha, who thinks that the Norwegian “fits the bill” at Old Trafford.

Haaland is being hotly tipped to leave Borussia Dortmund this summer and join up with Pep Guardiola at Manchester City.

The defending Premier League champions are desperate for an out-and-out striker and Haaland’s release clause is set at only £64million.

But United are almost certain to be in the market for forwards, with Cristiano Ronaldo and Edinson Cavani in the twilight of their careers, and Marcus Rashford linked with a move away. 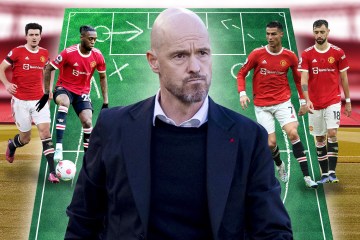 Saha is hoping Old Trafford chiefs get ready to push the boat out for Haaland.

Speaking to gamblingdeals.com, the 43-year-old Frenchman said: “Haaland is young and ready for a step up, at the moment there are obviously bigger destinations where Champions League football is guaranteed, where trophies are maybe more likely.

“That’s what United are looking for – someone who can guarantee goals, will definitely play for many, many years and who knows, could even break records.”

Haaland reportedly jetted to Monaco on Sunday to meet with agent Mino Raiola.

He is claimed to have attended a brief session with Dortmund on Sunday morning before jetting out.

According to German newspaper Ruhr Nachrichten, the purpose of the meeting was to finish finalising Haaland’s future.

April 30 is reportedly the deadline to activate his release clause, as they are expected to do.