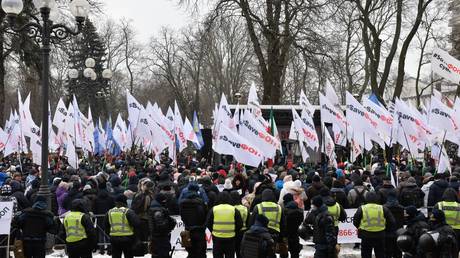 Chaotic scenes unfolded in the Ukrainian capital of Kiev on Tuesday, as representatives of small and medium-sized businesses tried to break into the building of the Ukrainian parliament – Verkhovna Rada.

Photos and videos that surfaced on social media showed a crowd of people waving Ukrainian national flags and various other banners marching through the center of Kiev.

Police had to close off some roads and divert traffic from the route for the time of the protest. As demonstrators gathered in front of the parliament building, tensions flared up between them and law enforcement.

Videos published on social media showed the several participants of the rally attempting to break through the police cordon. However, officers in full riot gear held ground, pushing the protesters away from the entrance to the building.

There were reports in the local media that lawmakers were evacuated via an underground tunnel, and that only law enforcement officers and representatives of the media were allowed to stay in the building as the standoff continued outside.

Three protesters and 18 police officers were injured in the fracas, the police said in a statement. At least 20 protesters were detained, according to the media.

Police have launched several criminal investigations over hooliganism and violence against law enforcement officers. The police also denied earlier media reports about one person being killed during the protests, noting that one man who fell ill during the protest was given first aid by the officers.

There have been ongoing protests by entrepreneurs against changes to the Ukrainian  tax system since late 2020. The opponents of the policy of Ukrainian President Volodymyr Zelensky demand that the law that made the use of cash registers mandatory for nearly all businesses be repealed, and a simplified system of taxation, accounting, and reporting be introduced. The protesters also have taken issue with the Ukrainian government’s Covid-19 restrictions.

The law, which was originally signed by Zelensky in 2020, but did not take full effect until January 2022, mandates the use of special cash registers that would log every transaction for taxation, and threatens steep fines to everyone who does not comply. Small business owners have protested against the law ever since, but it went into effect on January 1 as planned.

Inflation rose to 5.4% in April but remained lowest in EU