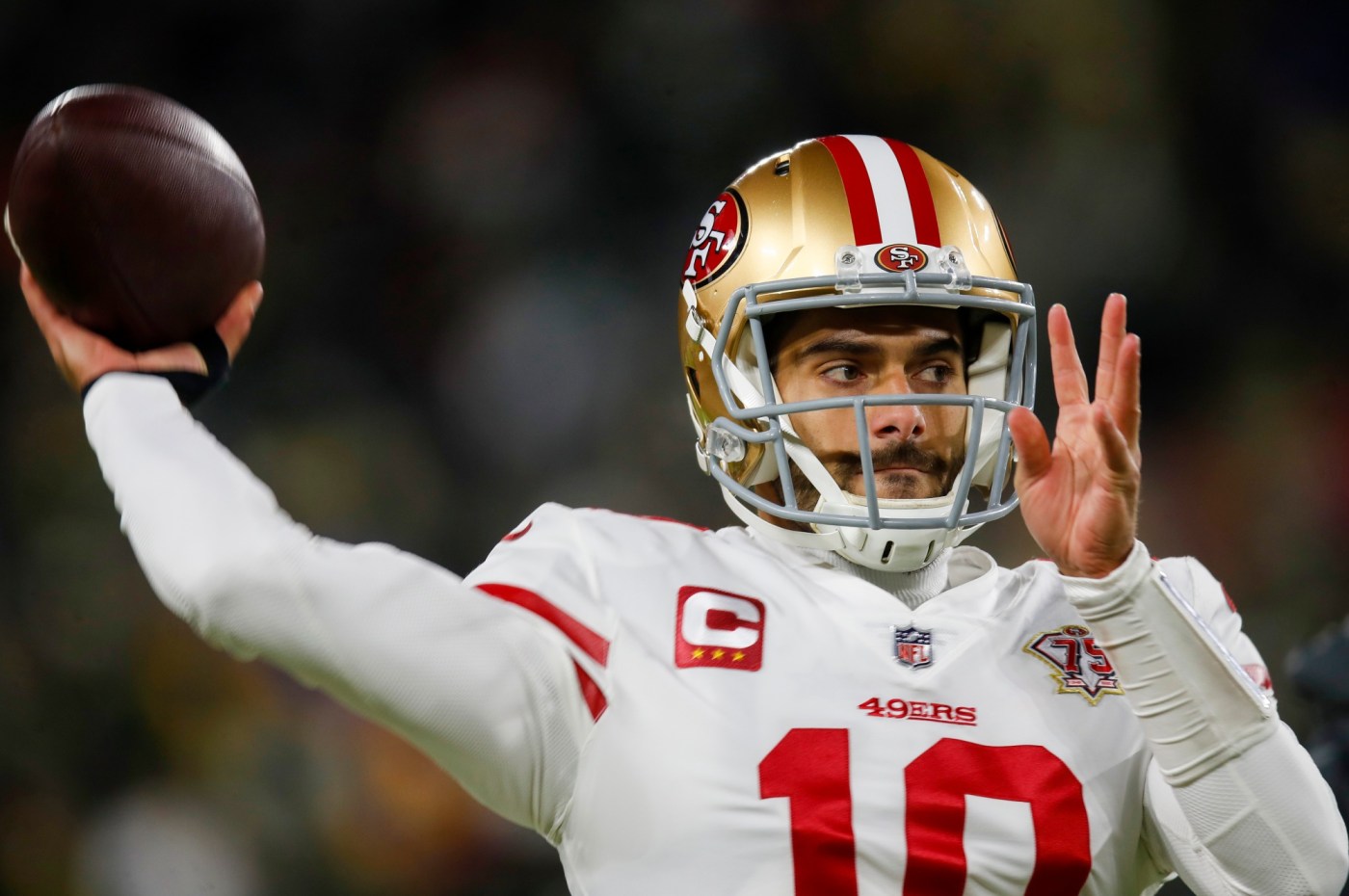 GREEN BAY, Wisc. — Here are the highs and lows from the 49ers’ first half of Saturday night’s divisional playoff game against the host Packers:

More last-minute heartbreak against the Packers. After losing their home opener on a last-minute drive, the 49ers saw a potential game-tying drive foiled, when Jimmy Garoppolo got intercepted 44 seconds before halftime.

Garoppolo, after twice escaping a potential sack, rolled right and targeted George Kittle toward the right pylon, only to have safety Adrian Amos intercept it at the 4-yard line.

And, yet, the Packers could not convert that Garoppolo turnover into points. Jimmie Ward blocked a field-goal attempt as the half expired.

Before Garoppolo’s interception, the 49ers went three-and-out on four series, then came to life.

On third-and-1 and about 4 minutes until halftime, the 49ers unveiled a creative play: left tackle Trent Williams was announced as an eligible receiver, then he lined up at fullback, went in motion to the right and led the way for and Elijah Mitchell, 4-yard conversion run. Williams blocked four defenders on the play.

Earlier in the drive, Garoppolo notched his first completion in six attempts, and it was George Kittle making a fantastic catch along the sideline for a 15-yard gain. Garoppolo topped that by escaping the pocket and shoveling a pass to Mitchell for 16 yards. Then Kittle made a 12-yard reception to the 9-yard, but the 49ers retreated, with Williams committing a holding penalty and then Garoppolo unleashing the interception.

Garoppolo is 3-of-9 for 43 yards and a 10.7 rating, which does not factor in multiple drops by his targets.

Counterpart Aaron Rodgers is 12-of-16 for 170 yards and a 108.9 rating, stats that got boosted by a 75-yard catch-and-run by a wide-open Aaron Jones in the final minute.

The 49ers offense went three-and-out on its opening four possessions, even though they comfortably started at their 40-, 42-, 38-, and 34-yard lines. Third-down sacks of Garoppolo dooming three of those series, and Drive No. 3 ended with drops by George Kittle and Jauan Jennings in Packers’ territory.

The second possession may have hurt most. It meant the 49ers could not capitalize on a Packers’ turnover, in which Fred Warner forced a Marcedes Lewis fumble. Left guard Laken Tomlinson gave up the first-series sack (to Za’Darius Smith) and right tackle Tom Compton got beat by Rashan Gary on the other two sacks.

To summarize the first quarter: the Packers amassed 109 yards and a touchdown, while the 49ers went three-and-out on three series for minus-7 yards and no points. Also, Adams had a hat trick of his own, with a catch on each 49ers cornerback. Garoppolo was 0-for-3, and Elijah Mitchell had no yards on two carries.

There isn’t a more potent duo in the NFL than Rodgers and Adams, especially against the 49ers. That combination set up the Packers’ walk-off field goal in their Week 3 win in the 49ers’ home opener, and it roared to life in this game.

Adams had receptions of 14, 10 and 11 yards on the opening touchdown drive, and he made a third-down conversion in the second quarter. He caught his five targets for 50 yards in the first half.

The Packers’ offense, however, got silenced after that Lewis fumble. Aiding and abetting the 49ers’ defensive cause: sacks by Samson Ebukam and Nick Bosa, and a Jimmie Ward tackle 2 yards short of the first-down marker.

Green Bay swiftly took the game’s opening possession 69 yards for a touchdown, and although A.J. Dillon scored it on a 6-yard run, Rodgers set it up with four lengthy completions, including those three to Adams.

The 49ers’ response: Not good, as they went three-and-out, even after a 32-yard kickoff return by JaMycal Hasty to put them at their 40-yard line.

The 49ers came away with minus-6 yards from their opening series, capped by Laken Tomlinson yielding a third-and-12 sack to Za’Darius Smith at Garoppolo’s feet. Leading up to that: puny runs by Elijah Mitchell (1 yard) and Deebo Samuel (2 yards) sandwiched around a Daniel Brunskill false-start penalty.

Then the 49ers couldn’t hold onto the ball, either. One snap after officials nixed a potential Deebo Samuel fumble (ruling the play over by forward progress), Brandon Aiyuk fumbled after a split-second catch over the middle, when hit by Rasul Douglas. A replay ruling nullified Aiyuk’s fumble, calling it an incompletion.

Jeff Wilson Jr. left with an ankle injury he sustained on the opening kickoff. Wilson has been relegated to special teams without any carries in the previous three games.

A game-time temperature of 14 degrees (and a wind chill of 0) made this officially the fifth-coldest game since Lambeau Field opened in 1957. The wind was clocked at 13 mph at kickoff.

Ime Udoka on Grant Williams: I told him to let it fly

Blizzard's next Overwatch 2 event will take place in June