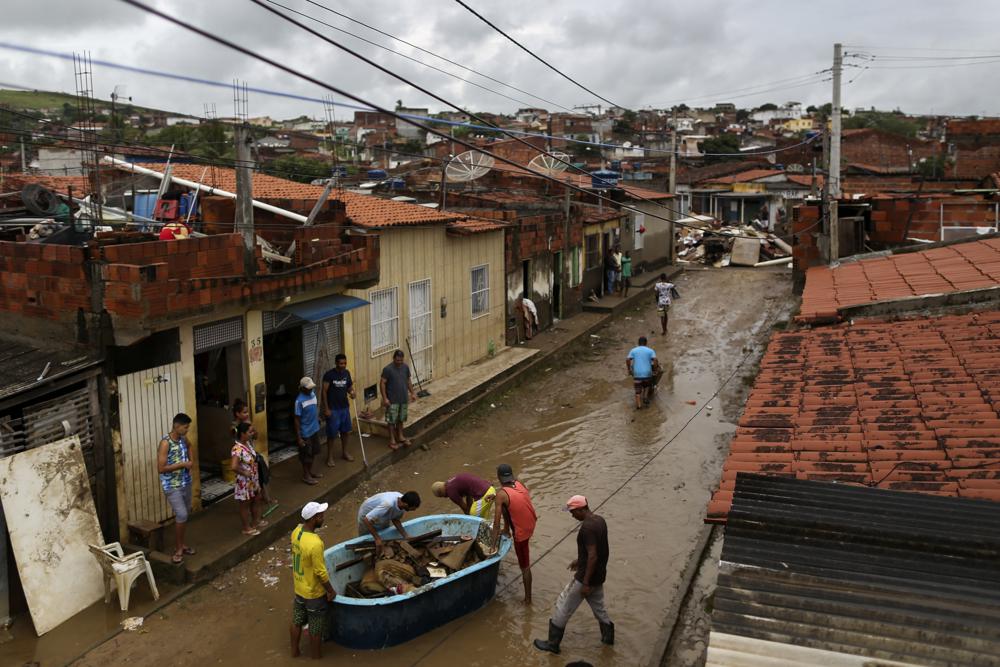 SÃO PAULO – Devastated by heavy rains since November, the southern part of Bahia State in Brazil is facing one of its worst humanitarian crisis in history, with more than 90,000 people displaced.

Extraordinarily high volumes of rainfall have caused the rupture of river dams over the past few weeks, flooding several urban and rural areas and destroying roads. At least 24 people died in the storms, and another 434 were injured. More than 130 cities are currently in a state of emergency.

Graphic videos showed strong flows of water forming on streets and reaching the rooftops of stores and small buildings. Many people had to wait for rescue on top of their houses.

“I had never seen anything like that in my life. Old ladies and pregnant women had to climb up the roof to save their lives,” said Bishop Jailton Lino of Teixeira de Freitas-Caravelas.

“Some people had to run so fast that they could not even take their phones with them,” he told Crux.

Lino’s diocese encompasses one of the hardest hit zones in Bahia. In the city of Nova Alegria, about 20 families that lost their houses have been temporarily sheltered in the church, and another 30 families are living in the parish hall.

“In Medeiros Neto, a nursing home was destroyed by the floods. A group of 12 elderly people is now living in the church,” Lino added.

The diocese has been organizing the distribution of food, clothes, and medicine given by donors.

“We have been receving many donations, so we were able to send part of them to other affected zones. Yesterday, a truck loaded with food was sent by us to the city of Itabuna,” the bishop said.

Along with other 14 nearby municipalities, Itabuna has been one of the most impacted cities in the diocese of Ilhéus, which encompasses 26 cities.

“Unfortunately, the poor have been the most affected by this catastrophe,” Bishop Giovanni Crippa told Crux.

The bishop explained that Ilhéus, once a world leader in the production of cocoa, faced a great crisis with the decline of the industry in the 1980s, and many people who worked on the farms ended up moving to slums in the city.

“Many cannot build a regular house in an adequate area and live in slums on hillsides, which are very vulnerable in events like that,” he explained.

An enduring economic crisis intensified by the pandemic had been leading many to ask for support from the Church over the past few years. Now, with the floods, most parishes already had food stocks and could immediately help those most in need, Crippa said.

He said that there has been a great movement of solidarity since the crisis began and even poor people are donating food for the displaced.

“In some parishes, the kitchens were adapted to prepared meals for the people who lost their homes. Some churches are also giving shelter to them,” he said.

The diocese also felt the impact of the storms, with churches and rectories being damaged in some cities.

The bishops’ conference has launched a nation-wide donation campaign, and the state government announced the creation of credit programs for business owners who have been affected.

“I have seen grocery stores totally under water. Besides the emergency aid, we will need to work hard to rebuild all that was lost,” Crippa said.

The bishop said that the state government has been very efficient in providing immediate assistance. President Jair Bolsonaro, however, is being heavily criticized on social media for his vacation trip to Santa Catarina State amid the calamity in Bahia.

He announced on December 28 that his administration will send $14 million to rebuild damaged roads in Bahia. Left-winger governor Rui Costa, Bolsonaro’s opponent, told the newspaper Folha de S. Paulo that at least five times that amount will be necessary.

On December 29, Costa said on social media that the Argentinian government had offered the possibility of sending a team of specialists in logistics, waste and water systems for victims of disasters. The Bolsonaro administration declined to accept it. Bolsonaro has criticized the progressive Argentinian President Alberto Fernandez on several occasions.

Crippa said that the Church is waiting for the needs of the community to be made more clear and will be part of the reconstruction efforts. He conducted a videoconference with all vicars in the diocese in order to understand the situation of each region.

“But we can never forget to give people spiritual attention too, something that is primordial especially in moments of trauma like that,” he said.

Marcellus Wiley: Mahomes is building a dynasty, he has the most on the line vs. Bengals I SPEAK FOR YOURSELF