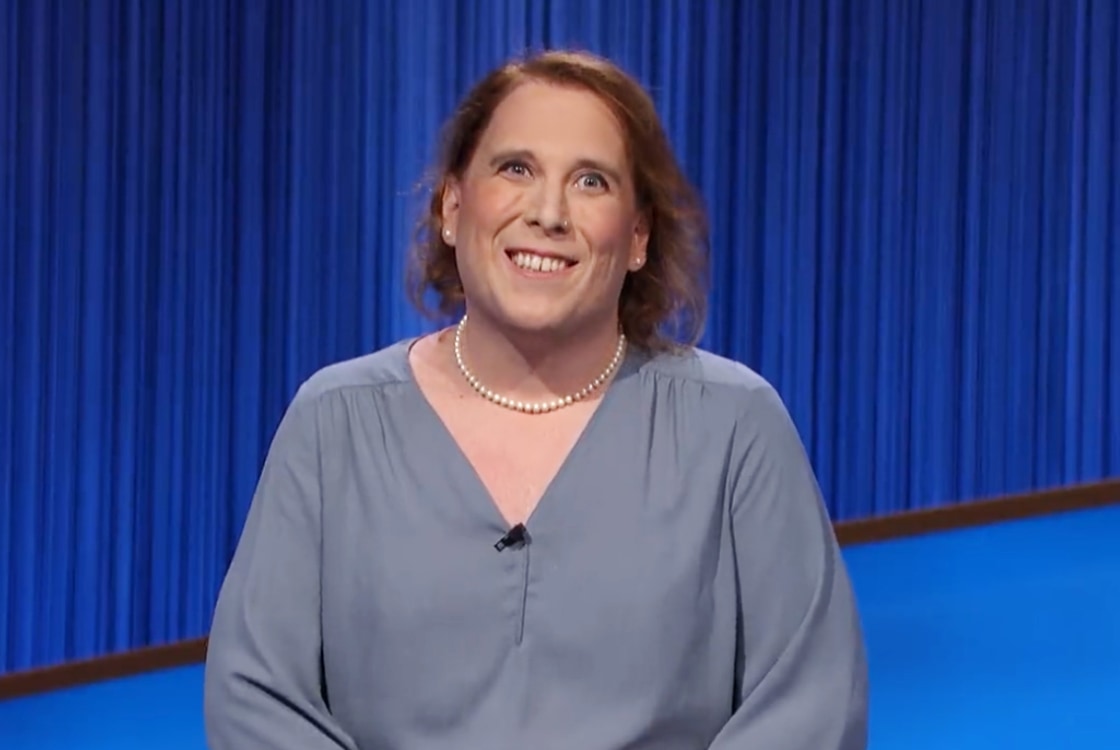 “Jeopardy” fans embraced Amy Schneider soon after she began to rack up wins on the show before Thanksgiving. But now the rest of the world is getting to know the Oakland engineering manager who now has won more games than any other woman in the iconic show’s history.

With her 22nd straight victory on Thursday, the Ohio native has earned $831,600, the fourth-highest total earned during the show’s regular-season play. She ranks behind only Ken Jennings, Matt Amodio and James Holzhauer for the longest winning streaks in the show’s history, according to a report from The Jeopardy Fan website.

But Schneider, 42, is winning fans for many more reasons, from her active, engaging Twitter feed to being a transgender woman who knows that success on the iconic show means a lot for other transgender people.

As she told ABC News earlier this month, “I am from Ohio where the only trans people I thought of were drag queens or prostitutes.” Schneider, on the other hand, sees herself as a regular person who doesn’t view her trans identity as anything too special.

“I don’t actually think about it that much,” she told Yahoo. “I was definitely aware, going on the show, that being a trans person in the spotlight could be an interesting thing. But, you know, it’s just what I am, and there’s sort of, like, nothing to do about it. It’s just who I am.”

Schneider, who could not be reached for comment this week, also has been charmingly down to earth in interviews and on Twitter about what it’s like to suddenly become famous and to have strangers recognize her in her local Safeway.

“It’s been pretty cool,” Schneider said in another interview this week. “It’s such a nice feeling to know I made these people happy just to be at the grocery store. The first couple times, I had a realization, that’s really nice. If I  stop liking it, there’s no way to stop it. But I’m not Tom Hanks-level famous, so I think it will be manageable.”

Even if she’s not Tom Hanks-level, she’s probably much more active on social media than he is, to the delight of “Jeopardy!” fans and anyone else who has become drawn to her story.

“Amy is using her history-making appearances and new platform to raise awareness of transgender issues and share a bit of her personal story too. We can’t wait to see how long her run lasts,” Nick Adams, GLAAD’s director of transgender representation said on Facebook earlier this month.

On Twitter, Schneider’s charmingly low-key nature emerges as she shares details about her personal life, including how she suffered depression as a teenager, and how she couldn’t wait to fly home to Oakland to see her girlfriend Genevieve when she was done taping her pre-recorded “Jeopardy!” episodes. She also has posted photos of her cat Meep.

I may have been overly ambitious in my plans for today. More Jeopardamy content is coming, but for now please enjoy Meep, standing guard in bed, and helping me with my social media pic.twitter.com/DSZEIxpOc0

Schneider has also revealed her personal, mnemonic techniques for absorbing a seemingly infinite number facts about history, science or pop culture. She follows each show with lengthy Twitter threads that break down the the pleasures or challenges of tackling each question.

For example, on Wednesday morning, she explained how she drew on her Titanic-related knowledge to correctly answer Wednesday night’s Final Jeopardy question. She had responded, “What is the Carpathia?” to the question: “In the morning of April 15, 1912 Officer Charles Lightoller became the last of about 700 people to board this ship … .” The Carpathia rescued the Titanic’s survivors.

So the only difficulty in the clue was avoiding the trap of answering "Titanic", since it said last to *board* a ship that night, meaning the Carpathia which rescued the survivors. Was watching, and podcasting, all ten episodes of Titanic: BS worth $30,000? I'm still not sure lol

Kelly, of Richmond, congratulated Schneider on setting “new standards for excellence, on the show and off.”

“I’m honored to be in your company,” Schneider replied on Twitter. “And I look forward to some day watching the woman who beats us both!”

Schneider has dreamed of being a “Jeopardy!” contestant since she was 5 years old when she was growing up in Dayton, Ohio.

“I’ve always watched it and I’ve also always been interested in learning facts and stuff,” Schneider told Yahoo, about the the nightly pleasure she got from watching the show with her parents, who also were avid viewers. “And as I mentioned on the show, in eighth grade I was voted Most Likely to Be on ‘Jeopardy!’ one day. It was always sort of in my mind that it might be something I did at some point.”

This week, Schneider described her excitement about learning from one of the show’s contestant coordinators that she had been chosen to be on the show. “It was a text message … saying I want to call and talk to you about some good news,” she told Alex Schmider, the associate director for transgender representation for GLAAD. “I was so excited. I was living alone at the time. I texted a few friends. I also texted my ex-wife, who had seen me trying out a few times. She was so excited.”

During Thanksgiving week, Schneider let people know about her identity when she wore a transgender flag pin on the show. Schimder told Schneider that she had offered “a powerful message about love, support and acceptance of transgender people during the holiday season.”

Schneider admitted that she wasn’t sure if or how she’d address her identity when she debuted on “Jeopardy!” on Nov. 17.

“I didn’t want to put that too front and center,” Schenider said. “But once I’d been on a few episodes, I felt a needed to acknowledge it in some way. First, I didn’t want a bunch of people on the internet wondering if I was trans and trying to find out. Second, I didn’t want it to seem like it was something that was secret or shameful or that I wasn’t aware of the significance of it. I knew trans ‘Jeopardy’ fans were watching my episodes carefully, like I did with previous trans contestants. I wanted to acknowledge it.”

But the bottom line for Schneider is that she wants to be known mostly for her skills. She said, “It shouldn’t be that interesting that a trans woman is doing well on ‘Jeopardy!’ I want it to be secondary to the fact I’m on ‘Jeopardy!’ and I’m good at it.”

Miss Manners: My gift to the bride got tangled in an expensive mistake