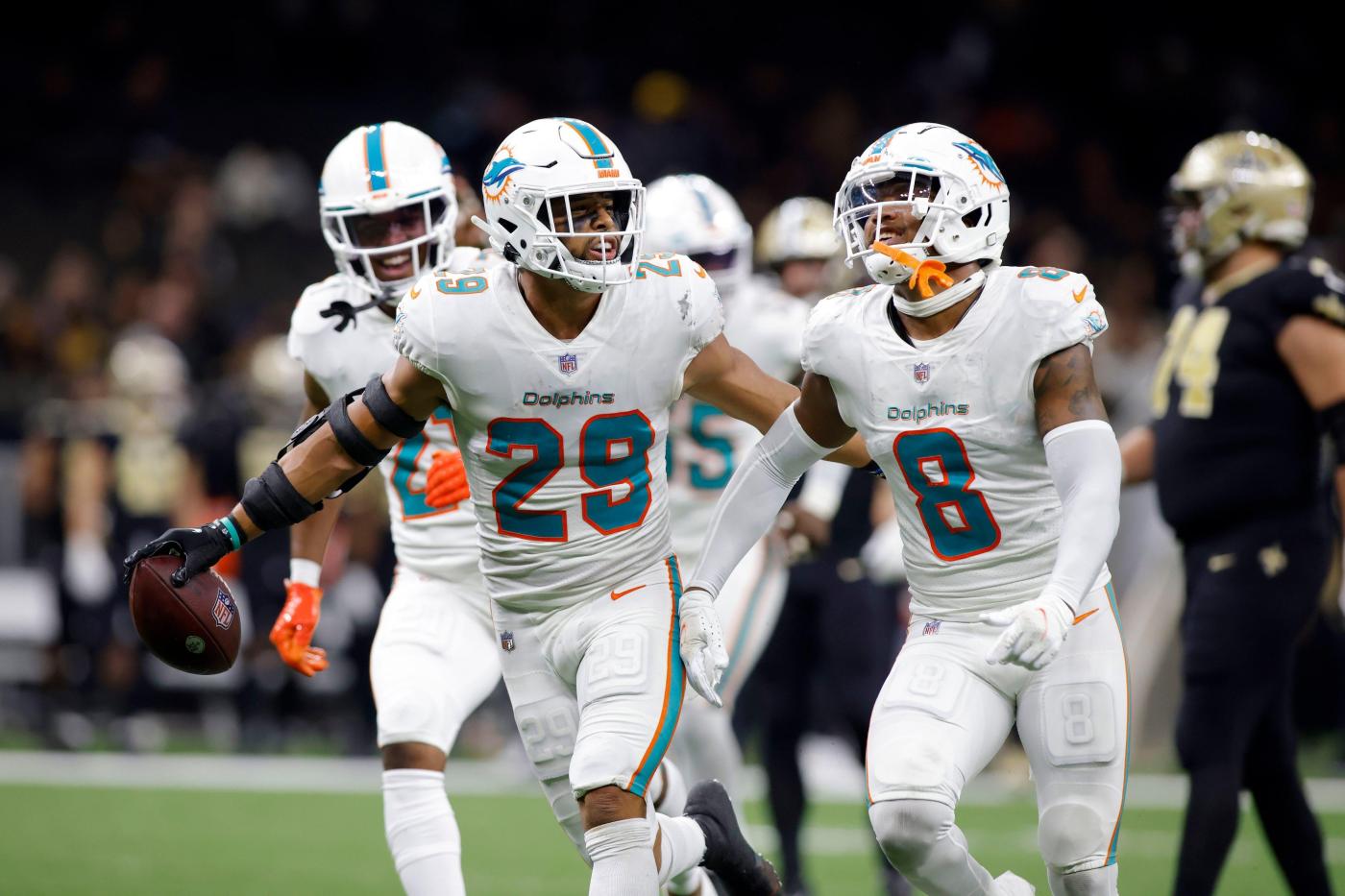 The NFL’s altered COVID-19 rules will allow the Miami Dolphins to get back two key reserves who tested positive for COVID-19 earlier this week, but one starter’s status for Sunday’s game against the Tennessee Titans remains a game-day decision.

Receiver Albert Wilson, who has started the past five games, and Solomon Kindley, the team’s top reserve interior lineman, returned to practice on Friday, and will likely be cleared to play in Sunday’s road game against the Titans (10-5).

Wilson and Kindley were one of seven Dolphins players who tested positive for the coronavirus this week, and were subsequently placed on the COVID-19 reserve list, which sequesters them away from the team and the facility. But new NFL rules implemented this week allows players who test positive to return to the team after five days instead of 10 if they are non-symptomatic.

Regardless of their vaccination status, players can return from isolation five days after testing positive if their symptoms have improved. That explains why Wilson and Kindley have returned. They have to be without a fever for 24 straight hours without the use of a fever-reducing medication, and must be cleared by the team physician.

Once they are cleared, the player must wear a mask for five days at all times when not practicing or playing a game

Players who are fully vaccinated may return sooner than five days if they return two negative tests.

Symptomatic players must remain isolated from the team until they have produced two negative COVID-19 tests within a 24 hour period, or the symptoms have subsided following the five day window.

Jones, the Dolphins’ starting strong safety, defensive linemen Adam Butler and John Jenkins, and receiver Preston Williams were all placed on the COVID-19 reserve list on Tuesday, which means they can’t be cleared until Sunday.

The Dolphins must remove them from the COVID-19 reserve list by Saturday’s 4 p.m. deadline for Sunday’s game for them to play, but there’s no guarantee that they would be cleared to play. That decision is made by the team’s medical staff.

Starting free safety Jevon Holland was removed from the COVID-19 list the day before Miami’s 31-24 Jets win two weeks ago, but he wasn’t cleared to play till the following week.

The fact that Sunday’s game is a road contest means the risk of putting all four Dolphins players who recently tested positive for COVID-19 on the team’s plane Saturday could influence Miami’s decision because it might lead to the spread of the virus with a critical Jan. 9 season finale at home against the New England Patriots looming.

That is a decision coach Brian Flores admitted his coaching staff will weigh the pros and cons for, and will discuss as a staff.

With Wilson returning the Dolphins can easily survive the Titans game without Williams, who has sparingly contributed this season, catching six passes for 71 yards. Miami could also call up Kirk Merritt and Cody Core from the practice squad to serve as backups.

Raekwon Davis, Zach Sieler, Christian Wilkins and Emmanuel Ogbah can handle the defensive line workload if Butler, a third-down pass rushing specialist, and Jenkins aren’t cleared to play. The Dolphins could also call up Andrew Billings and Benito Jones from the practice squad using the roster spots created by the players on the COVID-19 reserve list.

Addressing the absence of Jones won’t be easy because he’s evolved into one of the defense’s top playmaker in his second season.

If Jones doesn’t play Eric Rowe would likely step up, and play the strong safety spot full-time, returning to the role he held most of last season. This season Rowe has been used as a coverage specialist explosively, but he has managed to contribute 69 tackles and force three fumbles.

“Eric is obviously a big contributor to this team,” Flores said about the seven-year veteran, whom he brought with him from New England. “From leadership to experience, [he’s] obviously talented. He tackles well. Game is important to him…. Great to have him on our team.”

The Dolphins could also have cornerback Nik Needham fill in at safety, playing role he filled two weeks ago when Holland was sidelined by COVID-19, or have former Hurricanes standout Sheldrick Redwine fill in as the safety who works close to the line of scrimmage.

Today24.pro
Dolomites, Italy: Brenner Pass and Reifenstein Castle - Rick Steves Europe Travel Guide AMD RX 6500 XT is Worse Than 2016's GPUs: Benchmarks vs. GTX 1060, 970, 960, & RX 580 Who is Dan Evans’ girlfriend Aleah, and how long as she been with Australian Open tennis star? Mike Tyson brands Muhammad Ali ‘the greatest man ever’ in touching message on what would have been icon’s 80th birthday