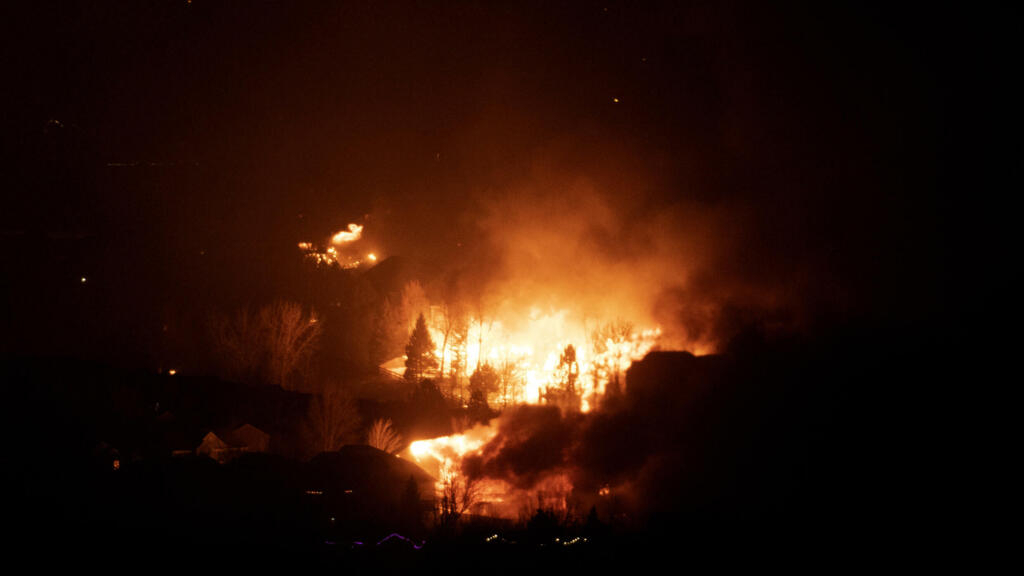 Up to a foot of snow is expected in some parts of the state, in a blizzard that should help to extinguish the fires but could also present new "life-threatening" challenges to travel in some areas, according to the US National Weather Service. "It will be very chilly as we ring in the new year tonight," the NWS office in Boulder tweeted early Friday, adding: "Snow will be falling across the majority of the area at midnight." At least 33,000 people in the towns of Superior and Louisville were forced to find shelter on Thursday, officials said, as flames tore through areas desiccated by a historic drought. Authorities estimated that close to 600 homes had been lost. "It is complete devastation ... We witnessed houses just exploding right before our eyes," Superior mayor Clint Folsom told CNN on Friday. But the arrival of cooler weather and at least temporarily lighter winds had slowed the most destructive wildfire early Friday, allowing local authorities to lift evacuation orders outside of Boulder County, the Denver Post reported. Smoke was still rising from several parts of Superior early Friday, after wind gusts ignited fires in several discrete spots, sometimes leaving blackened homes next to intact residences still decorated with Christmas lights. At least 1,600 acres (650 hectares) have burned in largely suburban Boulder County northwest of Denver. The blaze claimed a hotel, shopping center and apartment complex in Superior, where a mandatory evacuation order remained in place early Friday. "We know that approximately 370 homes in the Sagamore subdivision... have been lost. There's a potential of 210 homes lost in Old Town Superior," Boulder County Sheriff Joe Pelle told a news conference on Thursday. Colorado media outlets reported that at least six people were hospitalized with injuries, though there were no immediate reports of deaths. Patti Holtz on Thursday described the terror of evacuating her Boulder County home. "There's embers everywhere. So it makes me very frightened of course, with the wind, that it's going to continue to spread to other homes," she said. "You just can't see anything. It's like the black of night." Drought fuelling blazes The fast-moving fires are thought to have begun when power lines were toppled by gusting winds. Winds of over 100 miles (160 kilometers) per hour were reported in some places, fanning flames and preventing aircraft from taking off. The area's infrastructure was under strain, with rolling electricity outages in some areas and some residents instructed to use bottled water as public water supplies were diverted to firefighting. Colorado Governor Jared Polis declared a state of emergency Thursday, noting that this fire -- unlike previous blazes -- was in suburban areas. "It's like the neighborhood that any of us live in," he said. Like much of the American West, Colorado is in the grip of a years-long drought that has left the area parched and vulnerable to wildfire. "One of the many factors that lead to the devastating wildfire today is the recent record dryness," the NWS office in Boulder tweeted. Although fires are a natural part of the climate cycle, and help to clear dead brush, their scale and intensity is increasing. Scientists say a warming climate, chiefly caused by human activities like the unchecked burning of fossil fuels, is altering weather patterns. This prolongs droughts in some areas and provokes unseasonably large storms in other places. Daniel Swain, a meteorologist at the University of California, tweeted that it was "hard to believe" these fires were taking hold in December, usually a quieter time for blazes. "But take a record warm & dry fall, only 1 inch of snow so far this season, & add an extreme (100mph+) downslope windstorm...and extremely fast moving/dangerous fires are the result," he said.