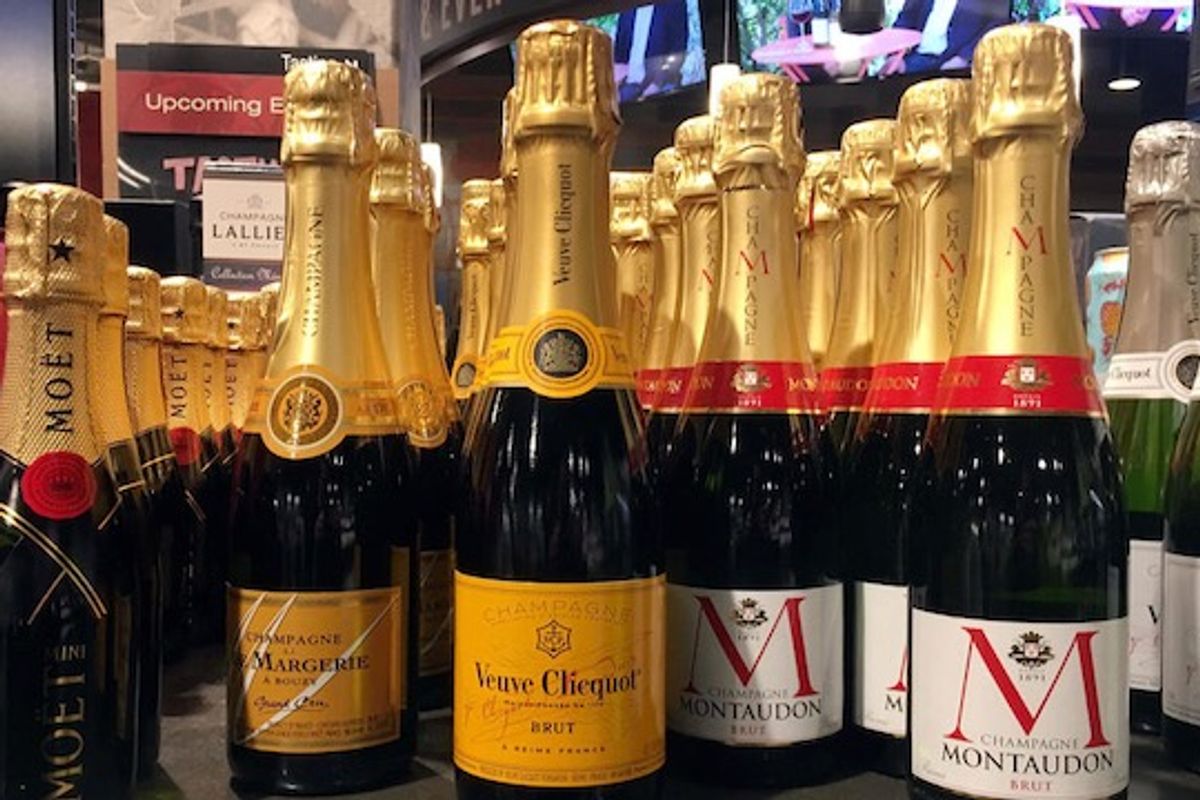 Towards the end, I commented that if the bottle is not empty, seal it with a sparkling wine stopper and store it in the refrigerator. The response was: “Why bother to seal it? Just put a spoon in the neck.”

I was somewhat surprised. Although I had heard it suggested previously, I did not think anyone took the idea seriously.

The fact is, it’s a myth to say a spoon in an open bottle of sparkling wine keeps it bubbly. You’re better off buying a proper stopper. 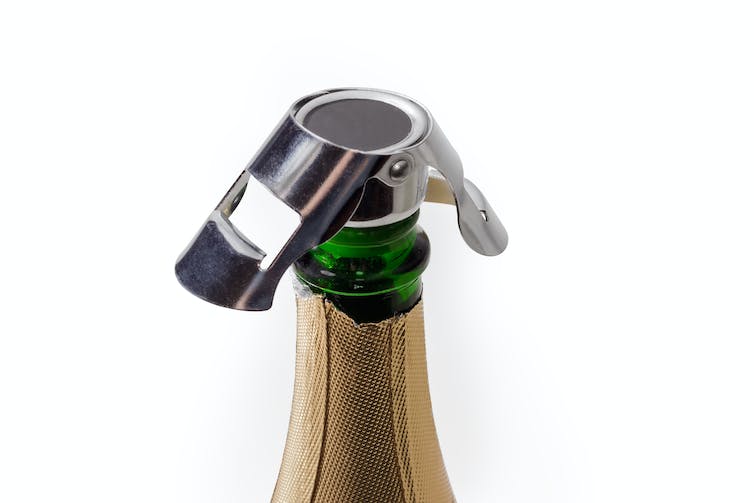 If you need to store a partly-used bottle, go and buy a proper sparkling wine stopper.

From my years researching wine chemistry and wine oxidation, I know minimizing contact between wine and oxygen is vital for stopping the onset of oxidative spoilage. Sealing the bottle is essential.

The carbon dioxide in sparkling wine is more soluble in wine at a lower temperature, so storing the wine in the refrigerator is also beneficial. In other words, you’ll retain more bubbles if you stick it in the fridge.

Some even claim the teaspoon must be silver, not stainless steel, although the basis for this seems highly speculative. 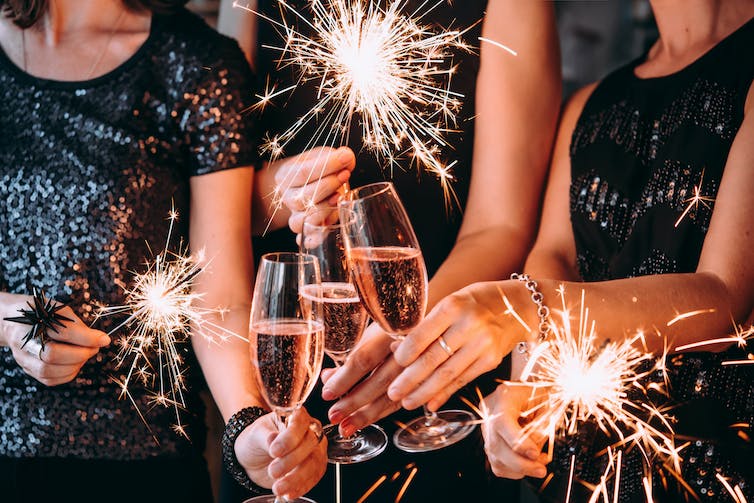 If you plan to keep your leftover sparkling wine, store it properly.

It is important to note some of the critical features of sparkling wine bubbles.

In his book Uncorked: The Science of Champagne, champagne researcher Gérard Liger-Belair demonstrated the amount of carbon dioxide lost depends on the way the wine is poured into the glass.

Pouring into a tilted glass retains more carbon dioxide than pouring into a vertical glass. Using bubble imaging techniques, Liger-Belair was able to track the flow of the bubbles in a glass.

He separately showed the bubbles are in fact aerosols (a suspension of fine solid particles or liquid droplets in air) containing aroma compounds that affect the taster’s impression. The release of bubbles even depends on the inside surface of the glass.

Bubble behavior is therefore complex. Any study on them needs to be replicated to ensure one is measuring a real effect and a one-off. 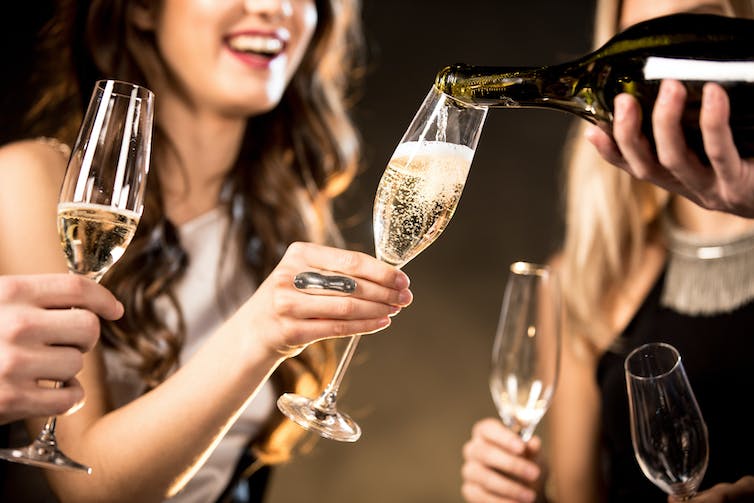 The release of bubbles even depends on the inside surface of the glass.

A key study on ‘the myth of the teaspoon’

One such on champagne by Michel Valade and colleagues was published in the periodical Le Vigneron Champenois in 1994.

The work, titled Le mythe de la petite cuillère – the myth of the teaspoon – was designed to address the claim that a teaspoon, preferably a silver one, could (according to my translation):

defy all the laws of physics and possess some legendary efficiency to protect the bubbles escaping from an open bottle.

These researchers used three strategies to assess the impact of bubble conservation on the wine: the change in pressure, the loss of weight and sensory analysis.

The wines were then stored at 12℃ with four methods to conserve the bubbles: open bottle, silver teaspoon, stainless steel teaspoon, cork stopper (which uses a hermetic seal) and crown seal (a metal lid with crimped edges, like you often see on a beer bottle). Each approach was performed in triplicate.

After 48 hours storage, the pressure in open bottles and those with a teaspoon inserted in the neck had dropped by a further 50%, indicating a significant loss of bubbles.

Clearly there was no teaspoon effect. Those sealed with a cork stopper or crown seal had a pressure drop of only 10%, demonstrating the significant advantage of using a proper closure. 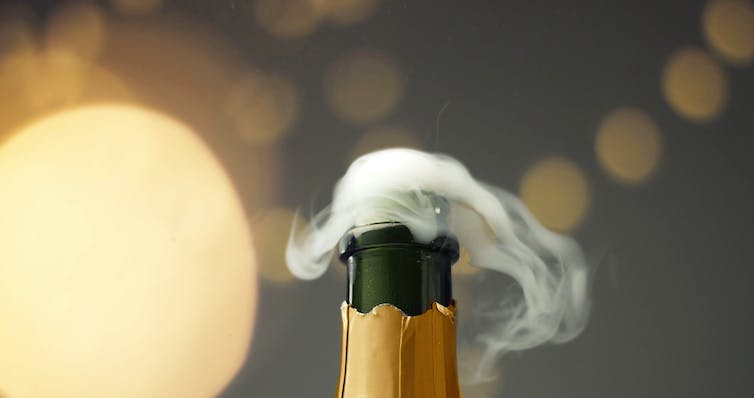 The source of bubbles in sparkling wine is the carbon dioxide released during the secondary fermentation.

These researchers also measured the change in the weight of bottles stored three different ways: fully open, tightly sealed or with an inserted teaspoon.

No decrease in weight was observed for the tightly sealed bottles. But for the fully open bottles and those with a teaspoon in the neck, the loss in weight was significant.

To finalise the evidence to dispel the myth of the teaspoon, the wines were subjected to sensory analysis by expert champagne tasters.

All wines showed some characteristics of oxidation, due to oxygen getting in during opening. However, those sealed with a hermetic seal were clearly more effervescent and livelier than those unsealed or with an inserted teaspoon.

Clearly, the teaspoon effect is a myth.

So, if you need to store a partly-used bottle, go and buy a proper sparkling wine stopper.

Unfounded optimism of Franco-German opposition to the US