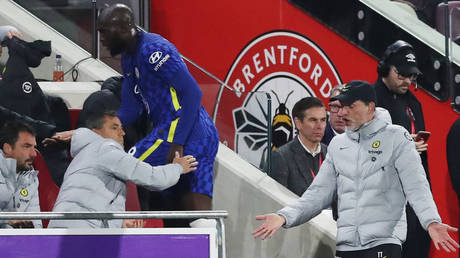 Chelsea coach Thomas Tuchel has hit out at comments made by record signing Romelu Lukaku in a recent interview in which he hinted at leaving the club, calling the remarks "noise we don't need".

Belgium forward Lukaku was hailed as the missing piece in Chelsea's patchwork of stars when he made his return to Stamford Bridge from Inter Milan in August for a fee of around $130 million.

The powerful striker was coming off a career-best season in Italy, winning the Serie A player of the season and bagging an impressive 30 goals in 44 appearances across all competitions.

Lukaku had been predicted to provide the type of focal point up front that Chelsea had been missing since Spain international Diego Costa left the club in 2017.

Lukaku has scored seven goals in 18 appearances in a campaign interrupted by injury and illness, and frustration seems to be festering in both Lukaku's camp and the London club.

"I'm not happy with the situation at Chelsea," Lukaku told Sky Italia in an interview broadcast on Thursday evening, but which is said to have been recorded several weeks ago.

"Tuchel has chosen to play with another system. I won't give up, I'll be professional. I am not happy with the situation but I am professional – and I can't give up now."

The 101-cap international added: "I think everything that happened last summer was not supposed to happen like this... how I left Inter, the way I left the club, how I communicated with Inter fans – this bothers me because it was not the right time.

On Covid:
"Everyone in the world is going through difficult times, you have to make sure you check on each other often.." pic.twitter.com/lZ09DMie0R

"Now it's the right time to share my feelings. I have always said that I have Inter in my heart: I know I will return to Inter, I really hope so. I am in love with Italy, this is right moment to talk and let people know what really happened.

"I really hope from bottom of my heart to return to Inter not at the end of my career, but when I'm still at top level to win more together.

"I want apologize to the Inter fans. The timing of my words was wrong: what you did for me will remain forever."

Those comments seem to have gone down like a lead balloon at Stamford Bridge.

Lukaku when Tuchel asked him to play as a RWB in training pic.twitter.com/fKtW8dCbXY

Tuchel not happy with Lukaku’s comments and rightly so.

Needless comments which adds more pressure and drama to the club which is already struggling massively at the moment.

Last thing we need is speculation about our £100m summer signing.

Chelsea are currently in the midst of an injury crisis, with the latest casualty being England full-back Reece James, who looks set for an extended spell on the sidelines after suffering a hamstring injury in the recent draw at home to Brighton.

Ben Chilwell has undergone an operation and Timo Werner, Andreas Christensen are also among the players out.

Tuchel appeared to be in damage control mode when he spoke about his star striker on Friday.

"We don't like it," the Champions League-winning coach said. "It brings noise that we don't need and it's not helpful.

Romelu Lukaku understands Thomas Tuchel's reasons for leaving him on the bench pic.twitter.com/Pg6ix6AVVi

Tuchel said this about Lukaku in October ???? pic.twitter.com/ue3nb8zHU1

"We don't want to make more out of it than it actually is. It is easy to take lines out of context, shorten lines, make headlines and then realize later that it is not so bad and maybe not what he meant.

"We don't like it, I don't like it because it's noise that we don't need. We need a calm environment and focus and this does not help.

"I don't feel [Lukaku is] unhappy. I feel the exact opposite, if you asked me yesterday morning, and that's why it's a surprise but that's why I'm the wrong person to ask. If there is something then it is behind closed doors, for sure.

"Like I said, this is what you read into it. It is very easy, in general, to take lines out of context and make headlines to get the focus.

"I totally understand the process and that is why it is a lot of noise, not a little noise.

"But still, we are not here to read the headlines.

"We can take the time to try to understand what is going on because it does not reflect the daily work, attitude and behaviour which Romelu shows here at Cobham. We will [talk] behind closed doors and openly."

The tensions within Stamford Bridge could not have come at much worse time.

Chelsea host Premier League rivals Liverpool on Sunday in a game which could make or break their ambitions of maintaining a realistic title challenge, before a two-legged EFL Cup semi-final against London neighbors Spurs.

A trip to runaway league leaders Manchester City is also on the horizon on January 15.

Tuchel and Chelsea will be hoping that the ship has been steadied by that time but if Lukaku continues to agitate for a move, it may well lead to Roman Abramovich having to get his checkbook out once again – something which the club had hoped to avoid after announcing significant financial losses on Thursday.

The Trouble with Argentina