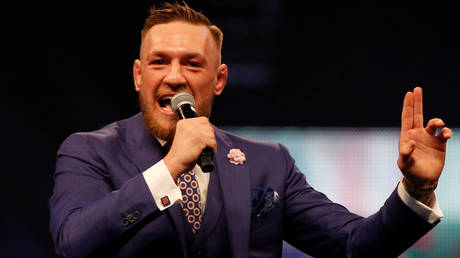 Kovtun, 26, is one of the most successful figure skaters of his generation, having consistently medalled in both junior and senior events throughout his career.

He reached a high of number six in the world in the 2015-16 season before announcing his retirement in 2019 – but even for an athlete of his undeniable talent, Kovtun remains an obscure figure outside of skating circles.

If the Ekaterinburg native had his way, the top stars in the sport would be able to generate more attention by being given free reign to express themselves in the same style that UFC superstar McGregor has throughout his notorious fight career.

"If you have nothing to answer, say no comment," Kovtun told Match TV via translation, referencing what he suggests is a self-enforced muzzle placed on the sport's biggest names. "If you have something to say, say whatever.

"Our athletes, faced with provocative questions, will be more experienced in dealing with journalists. The level of interaction with the press will increase," he added.

While the addition of trash-talk to a sport such as figure skating would appear ill-fitting to some, Kovtun feels that mainstream audiences would be more likely to pay attention if athletes were let off their leash and permitted to speak their mind.

"For example, I liked to learn something at press conferences," he added. "Journalists know that I could be asked any question. I could refuse only if I wanted to collect my thoughts and prepare for the competition.

"And in our country, people usually begin to communicate openly only when they end their careers. I am not saying that everyone should deal with trash-talk. But whoever is ready can, and this will raise the popularity of the sport."

Kovtun suggested that the current state of social media has left many athletes unwilling to truly be themselves for fear of reproach from a baying woke mob, or from figures within figure skating who might think that provocative statements are beneath the sport.

He added that the evidence of McGregor's rise from unheralded Dubliner to global superstar should be an inspiration, not something to avoid.

"You are sometimes shocked by the wave that rises on the Internet from your answer. And I understand why athletes want to stick to the ideal image," he explained. "Sport is not showbusiness, and the main goal is to show results. After strong statements, you will be 'shaken' more at the start.

"But figure skating needs its own Conor McGregor. In our figure skating, there is just an unplowed field of possible options in terms of PR. Interesting tournaments, awards like [film honors] the Oscars and more. All this can be done with [our sport]."