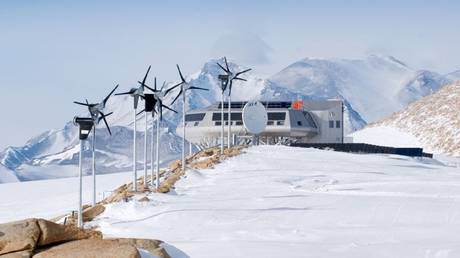 Researchers working at Belgium’s Princess Elisabeth Polar Station have contracted Covid-19, even though all personnel have been inoculated and any new arrival has to follow rigorous safety protocols.

Developments at the station, which is located miles from civilization, have proven there is no escape from the omnipresent virus that’s been holding the planet in its grip for almost two years.

Two-thirds of the station’s staff of 25 have been infected with the coronavirus, Belgium’s polar secretariat confirmed to local media earlier this week. But how the virus could have reached the remote station, located some 220km (137 miles) from the Antarctic coast, remains a mystery.

“All those present have received two doses of vaccine, and one person has even received a booster shot,” said Alain Hubert, the facility’s executive operator and head of security measures. All staff members also have to undergo a series of PCR tests on their long journey to the station.

Nonetheless, even such strict control measures were apparently not stringent enough, as the first Covid-19 case was reported at the station in mid-December among a group of new arrivals. The person in question was immediately placed in isolation, but two others were soon revealed to have contracted the coronavirus as well.

All three infected researchers were evacuated on December 23, but this measure did not stop the virus from spreading further. A virologist contacted by the polar secretariat said the variant that has infected personnel at the station might be Omicron – the highly transmissible strain recently discovered in South Africa.

There are two emergency doctors and all the necessary equipment at the station to treat anyone who falls ill, according to the media. In the meantime, the polar secretariat has placed all personnel under quarantine and put a halt to any new arrivals until the Covid-10 cluster there dissipates. Explorers venturing on two new expeditions had been expected on January 12, but their arrival has now been delayed.