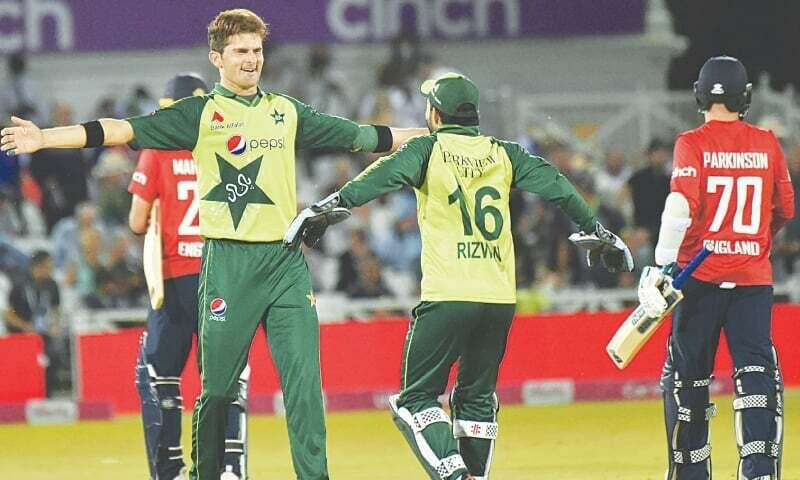 The other two nominees are England captain Joe Root and New Zealand captain Kane Williamson, the ICC said in a statement.

Shaheen — the man on fire

Elaborating on the achievements of the players, the ICC noted that Shaheen took 78 wickets in 36 international matches this year at an average of 22.20 runs. He also delivered his career-best figures in an innings this year in August against the West Indies, grabbing six wickets for 51 runs.

"The tall Pakistani pacer was on fire throughout 2021, knocking some of the best batters over across all three formats of the game. He especially had a year to remember in Tests and T20Is, reaching his absolute peak during the T20 World Cup in UAE where he impressed one and all with his sheer speed and skills," the statement said.

"He ruled the shortest format throughout the calendar year, scalping 23 wickets in 21 matches with his death bowling improving by leaps and bounds," it added.

The statement made special mention of Shaheen's performance against India in the T20 World Cup where it was the pacer's double-wicket salvo up top that put India on the backfoot early and set the tone for the entire match.

It also recalled Indian captain Virat Kohli's post-match statement in which he had heaped praise on Shaheen, saying: "He put our batsmen under pressure immediately with the new ball, and he ran in with intensity and showed that he's bowling in consistent areas, so as batsmen you are forced to be a bit watchful.

"That spell kind of put us on the back foot immediately, and from there on to get those extra 20, 25 runs, in the end, seemed pretty difficult when you lose three wickets for 20 runs."

Ever-reliable batsman for Pakistan, Rizwan accrued 1,915 runs in 44 international matches this year at an average of 56.32 and racked up 56 dismissals behind the stumps.

"The Pakistan wicketkeeper-batter ruled the roost in 2021 when it came to the shortest format of the game. Aggregating a staggering 1,326 runs in only 29 matches, Rizwan struck at an average of 73.66 and a strike rate of 134.89. Apart from his exploits with the bat, he was as solid as ever behind the stumps," the statement said.

Praising Rizwan's consistency, the ICC statement noted that he had also improved his Test performances this year, gathering 455 runs in nine matches at an average of 45.50.

According to the ICC's statement, Rizwan's most memorable performance also came during Pakistan's match against India, with the batsman hitting 79 on only 55 deliveries, including six fours and three sixes.

"He ensured that there were no hiccups in the run-chase as Pakistan galloped towards the target without losing a single wicket to seal a 10-wicket victory. Rizwan would continue this form throughout the remainder of the tournament, scoring 281 runs and ending as the third-highest run-scorer," it added.

The ICC also recalled Rizwan's performance in Pakistan's semi-final against Australia in which he top-scored for the Green Shirts with 67 from 52 balls. During his innings, Rizwan had become the first player to score 1,000 runs in T20 internationals in a calendar year.

Officials had revealed after the match that Rizwan was in hospital with a severe chest infection before taking the field in the semi-final.

Saying Rizwan has a "character of steel", the statement recalled coach Matthew Hayden's post-match talk in which he said, "[Rizwan] is a warrior. He has been brilliant through it (the campaign) and he's got great courage."

A day earlier, the ICC announced the nominees for the ODI Player of the Year award, with Pakistan skipper Babar Azam one of four contenders for the accolade.

According to the ICC, its Voting Academy which comprises global cricket journalists and broadcasters will vote for their first, second and third choices. The world cricket body will also take fans' votes into consideration. The winner will be decided by combining the results of the Voting Academy and fans' votes.

Who Is 'West Elm Caleb'? TikTok Users Call Out Guy Who Allegedly Ghosted Them