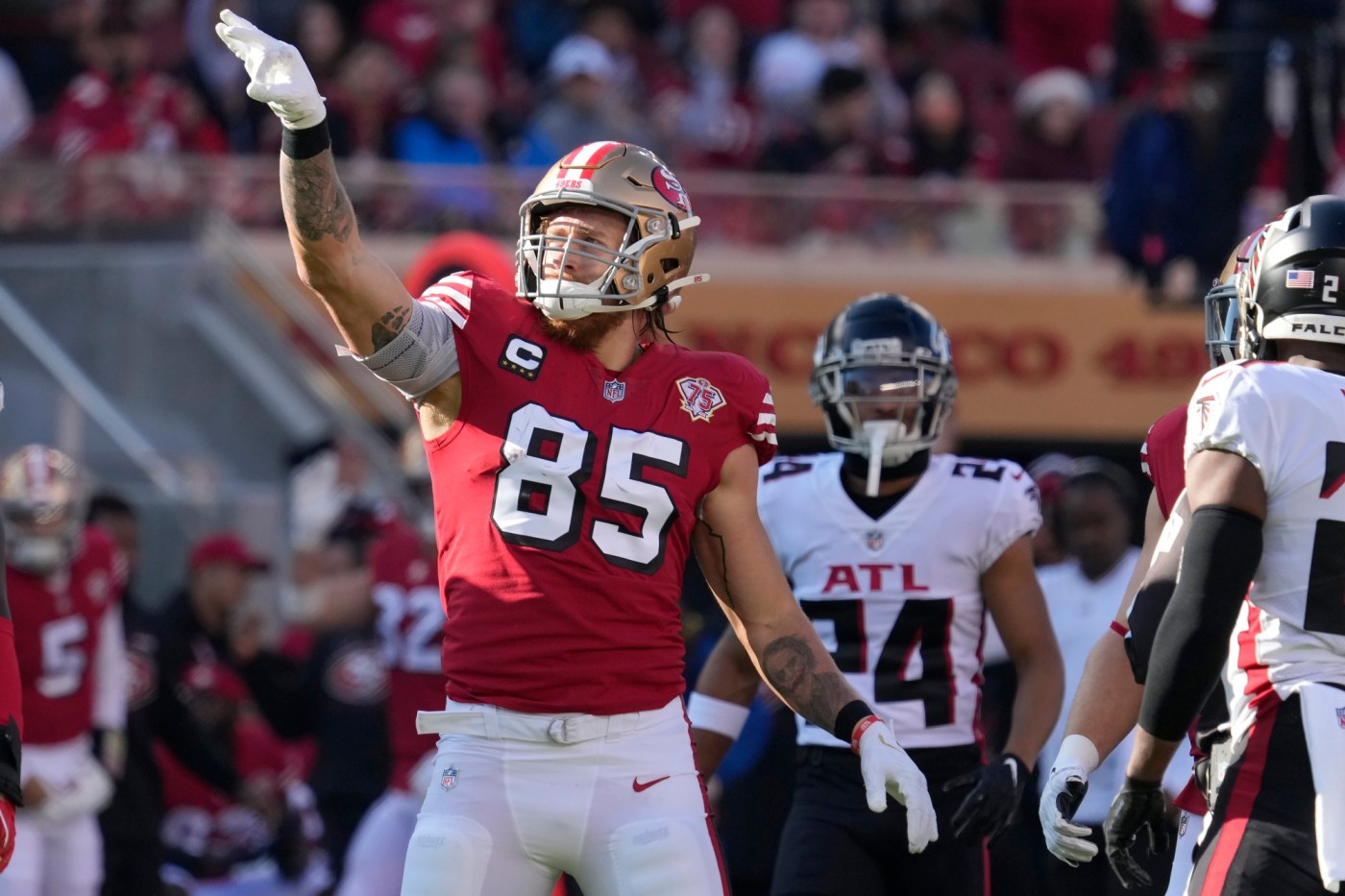 SANTA CLARA — No need to make this complicated.

In the phraseology often used by the coaching staff, the 49ers need George Kittle and Nick Bosa to be “the best version of themselves” Sunday. If that happens, the Houston Texans will go home with their 12th loss of the season and the 49ers (8-7) will be one step closer to the playoffs.

This makes sense, because Kittle and Bosa are not complicated guys. Kittle’s strength, will and athleticism set him apart from every tight end in the NFL. He relishes every one-on-one matchup with real enthusiasm culled from the world of fake enthusiasm and the WWE.

Bosa limits his entertainment to damage done on Sundays, and the rest of the time focuses on making himself a weapon of mass destruction. He has a wry smile, speaks softly and gives the impression he’s not telling you everything he knows, while at the same time getting his point across.

As much as the focus for the 49ers against Houston is on whether Jimmy Garoppolo or Trey Lance will be the starting quarterback, it won’t matter if Kittle and Bosa perform at an elite level at which both are familiar.

The 49ers knew Lance, having played essentially one season and one game of college ball at North Dakota State, might not be an option for some time if at all in 2021. As for Garopppolo, they never make the trade to go from No. 12 to No. 3 without the understanding he wasn’t their future.

That puts the 49ers in the position of relying on players other than the quarterback to deliver the goods in a league catered to quarterbacks.

The 49ers’ supporting cast includes jack-of-all-trades Deebo Samuel, middle linebacker Fred Warner and left tackle Trent Williams, but their heartbeat comes from Kittle on offense and Bosa on defense in that they can change the momentum on any given snap.

Neither player did the kind of damage they’ve done in other games in a 20-17 loss to Tennessee. Kittle, who caught 28 passes for 425 yards in the previous three games, had two catches for 21 yards.

He has 65 receptions for 875 yards despite missing three games due to injury. The Pro Football Hall of Fame requested (and received) his cleats and gloves as a result.

Bosa had a streak of six games with a sack snapped against the Titans and has 15 after missing the 2020 season with a torn ACL.

Kittle and Bosa are transcendent players in terms of explosiveness and physicality. Whatever the reasons for going silent against Tennessee, it can’t happen Sunday or in Week 18 against the Rams.

To be fair, it’s not as if tight ends or edge rushers can dictate things on a quarterback level. Tennessee went out of its way to make sure Kittle was accounted for, and Bosa faced a tight end and chip blocks from running backs to an extreme.

You could also argue that being at an elite level at their respective positions, it shouldn’t happen often if things are schemed correctly by the coaching staff and they win their individual matchups.

Kittle was the target on Garppolo’s end zone interception early on that put the brakes on the 49ers’ momentum. Bosa has been a focus of opposing blocking schemes all season, but maybe not to the extreme that he was against Tennessee.

When talking to reporters Thursday in a teleconference, Kittle shrugged off the lack of targets as part of the normal rhythm of football.

Bosa made a concession that was cringe-worthy for the coaching staff regarding how the 49ers had prepared for Tennesee’s blocking schemes. The Titans basically kept as many people as they could in to block, then succeeded on long third-down throws to keep drives alive.

“I think we were a little ill-prepared last week,” Bosa said. “We didn’t expect that fully. But we’ll be ready for that.”

While it stretches credibility in terms of coaching strategy to assume the Titans wouldn’t go out of their way to nullify Kittle and Bosa, none of that matters at this point.

There’s an element of randomness that comes with the positions Kittle and Bosa play. It’s not like focusing on a quarterback who has the ball on every snap. It’s not unusual for even the best players other than quarterback to go unnoticed for a game or two.

The 49ers, however, have run out of time and aren’t sure who their quarterback will be for the remainder of 2021.

Time to depend on elite performance from players they know can deliver. The loss to the Titans serves as a warning on what happens if Kittle and Bosa don’t deliver in a big way over the last eight quarters of the season.

And while the receptions and sacks produced by Kittle and Bosa are not entirely within their control, it’s up to the coaching staff and the game plan to ensure it doesn’t happen again.

Otherwise, it’s an offseason to ponder how and why an alleged contender faded into mediocrity.

UP Election 2022: Amit Shah campaigns door to door in Kairana, meets families who had migrated in 2014

Our 3 Favorite Hand Warmers Are All On Sale This Weekend – Save 39% Now!