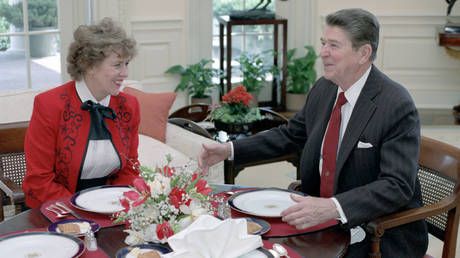 Suzanne Massie, who advised the US government in the 1980s, has appeared on RT’s Worlds Apart program, explaining why she’s applying for Russian citizenship and revealing some details about her former boss, Ronald Reagan.

Massie, who first visited the USSR in 1960s, had been writing about Russia all her life. She wrote five books on the subject, including ‘Land of the Firebird: The Beauty of Old Russia’, the work which so impressed President Reagan.

Talking about her bid in May for a Russian passport, she said that “the only reason why this is happening is because I wanted to be able to write my next book here in [Russia]… to be able to come easily, stay as long as I need to, to do my work.”

Her move “definitely will not produce” any uproar in the US, even despite the current tensions between Washington and Moscow, the writer assured host Oksana Boyko.

“I have informed the Americans from the beginning. I don’t lose my American citizenship,” Massie – who also has a Swiss passport – said, adding that the US government is well aware “all my work in recent years has taken place here [in Russia]; because my goal is always to try to explain Russia better and more completely than many Americans know it.”

US citizens should be educated about Russia and the Russians, she added, as “the two peoples are very suited to each other… My personal view is that it’s more important than ever that US and Russia develop a constructive relationship, because I think if we can do that – and I’m hoping we can – it’ll be better for the whole world.”

Massie was the only woman in the Reagan administration, with its top man valuing her input on Russia highly. She said the president read all her books and generally was an avid reader, contrary to attempts by the media to portray him as an uneducated former actor.

READ MORE: From box office to public office: US actors who aced in politics

“He really was a genius,” she said of Reagan, adding that the man’s greatest talents were his honesty and great interest in people. “He was sensitive and anybody could talk to him.”

However, Massie worked as his adviser in a private citizen’s capacity and was never on salary. She said she didn’t want to get paid because it was important for her to stay “independent,” and cited a Swiss saying: ”Whoever pays also decides the tune.”