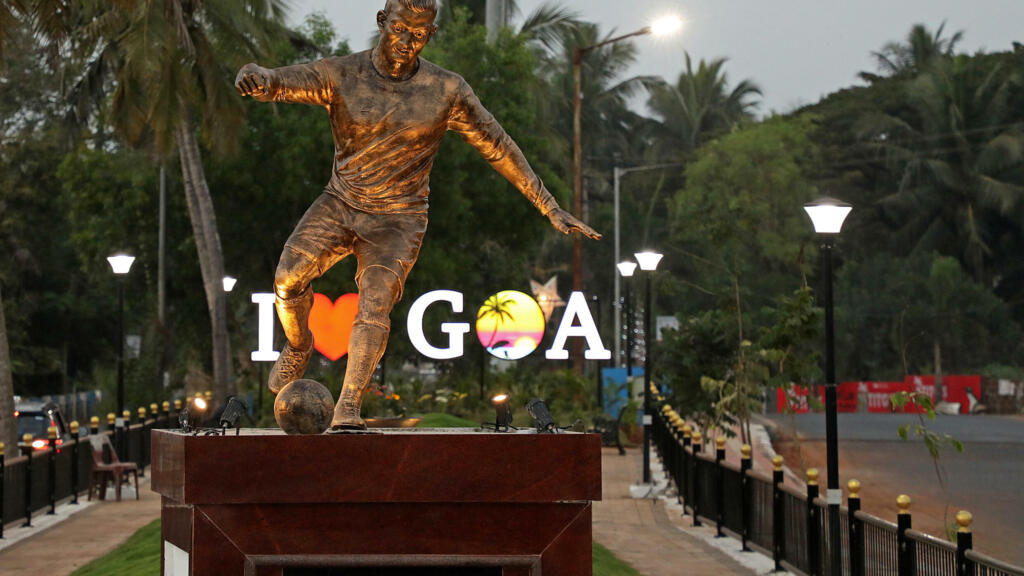 Protesters with black flags gathered at the site after the statue was unveiled this week in the town of Calangute. They expressed anger that authorities had shunned Indian sports stars and chosen a player from Portugal, which granted Goa independence in 1961. Micky Fernandes, a former Indian international player who is from Goa, said the choice was "hurtful" and a "hangover" from Portuguese rule. "Ronaldo is the best player in the world but still we should have a statue of a football player from Goa," Fernandes told AFP. Michael Lobo, a local minister with India's ruling Bharatiya Janata Party, told AFP the aim was to inspire young people to excel not just inside the country but internationally. "All the boys and girls who want to make football a career will get inspired by people like Cristiano Ronaldo," Lobo said. "If you pursue your dream and you're passionate about it then you can reach a higher goal. This is what we have written on the plaque." Most of present-day India gained independence in 1947. But Portugal's then military dictatorship only relinquished Goa following an invasion by the Indian army and a two-day war in 1961. Portugal's centuries-long influence remains visible in local architecture, particularly the many churches. Many people in Goa have Portuguese-origin surnames. Unlike in most of India, many Goans prefer football to cricket -- and many support Portugal in international tournaments such as the World Cup. "I follow (Portugal) too but when we have our own players we cannot put up a statue of someone from outside," Fernandes said. It is not the first time a statue of Ronaldo, 36, has caused an upset. A grinning bust unveiled at Madeira airport in Portugal in 2017 was widely ridiculed as looking little like its subject.

Analysis-A digital dollar is years away as U.S. Fed kicks issue to Congress

Ice hockey at the Beijing Olympics

Today24.pro
Bet £20 on Arsenal vs Burnley and get money back as cash if you lose, plus 176/1 prediction and tips with Paddy Power NBA Gives Grayson Allen Laughable Suspension For His Hard Foul Olympics-Ice hockey-Fans lose but China boosted by NHL Beijing pull out Ice hockey at the Beijing Olympics