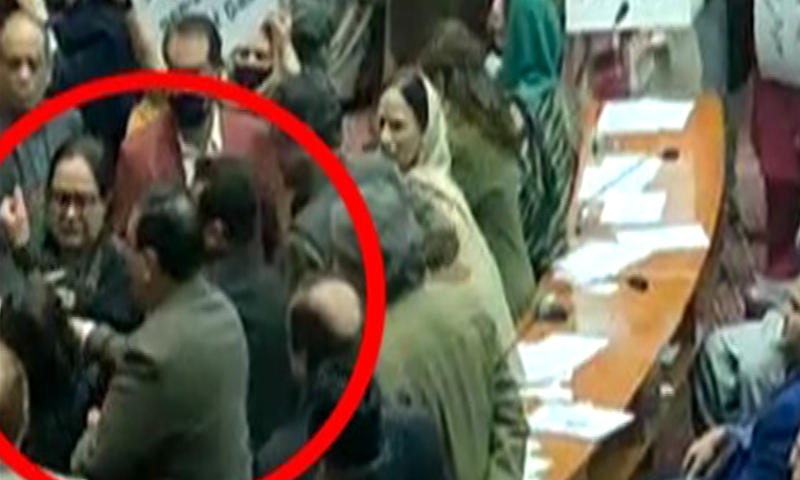 ISLAMABAD: Ruling PTI MNA Ghazala Saifi and Shagufta Jumani of the opposition PPP got into physical brawl during the National Assembly’s noisy sitting on Thursday.

The two lawmakers surrounded by others were seen shouting and pushing each other when the protesting opposition members had gathered in front of the seats of ministers to have a face-to-face argument at the time of the presentation of the controversial finance bill.

TV channels, while showing the footage of the incident, claimed that Ms Jumani slapped the PTI MNA after having some heated excha­nge of arguments with her.

On the other hand, the PPP members were quoted by her party colleagues as saying that in fact she was attacked by Ms Saifi and that she had only retaliated.

The members of the treasury and the opposition, however, immediately separated the two women.

Later, Ms Saifi issued a statement claiming that she had got her thumb fractured during the scuffle with Ms Jumani. “I am appalled at the way Shugafta Jumani has conducted herself. To behave in such a way, in a space which has such specific codes of ethics, a place for us to voice the concerns of the people we represent, for it to be reduced to this sort of brawl-like behaviour should be a cause of intense shame for Ms Jumani,” said the PTI member in her statement.

Ms Jumani could not be contacted for comment. However, a TV channel quoted her as saying that if someone would physically attack her, he or she would definitely face a reaction.

When contacted, PPP MNA Raja Pervez Ashraf said that Ms Jumani had come to him complaining that a PTI lady had attacked her and that she had also received a minor injury. He termed the incident unfortunate.

Genome-sequencing laboratory to open in UP-Mindanao