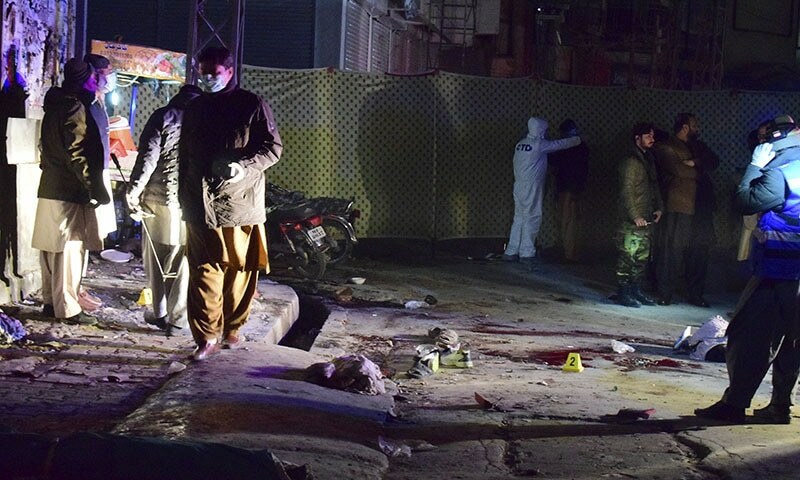 QUETTA: Four people were killed and 16 others injured in a bomb explosion near the main gate of a college at Jinnah Road area here on Thursday night.

Police said unknown people planted an improvised explosive device near the main gate of Science College and detonated it with remote control at 9.40pm, resulting in the killing of four people and injuries to 16 others.

They said the target of the blast was leaders and workers of Jamiat Ulema-i-Islam (JUI-Ideological group) who had come to attend Shuhada Conference organised by the party’s student wing.

The deceased and the injured were all seminary students and workers of the JUI-Ideological group.

Provincial emir of the party Maulana Abdul Qadir Luni, Maulana Mehmood-ul-Hussan Kazmi, Maulana Abdul Sattar Chishti and other leaders escaped unhurt in the blast as they had left the college premises just before the blast.

Police and personnel of other law enforcement agencies rushed to the scene of the blast and after cordoning off the area shifted the bodies and the injured to civil hospital where a state of emergency was declared.

“We have received four bodies and 19 injured,” Dr Javed Ahmed, medical superintendent of the civil hospital told Dawn, adding that the condition of four injured was serious.

The bomb disposal squad collected evidences from the explosion site. “It was a remote-controlled IED,” a senior official of the BDS said, adding that the device was planted close to a car which was parked near the main gate of the college.

Several vehicles and motorcycles were damaged by the impact of the blast while windowpanes of nearby buildings were smashed.

No group claimed responsibility for the attack.

Hackers could take control of your PC through this game

Today24.pro
Bet £20 on Arsenal vs Burnley and get money back as cash if you lose, plus 176/1 prediction and tips with Paddy Power NFL-Brady retirement talk shifts into high gear after Buccaneers loss 49ers-Packers halftime report: Garoppolo red-zone interception squanders first strong drive Alpine skiing at the Beijing Olympics