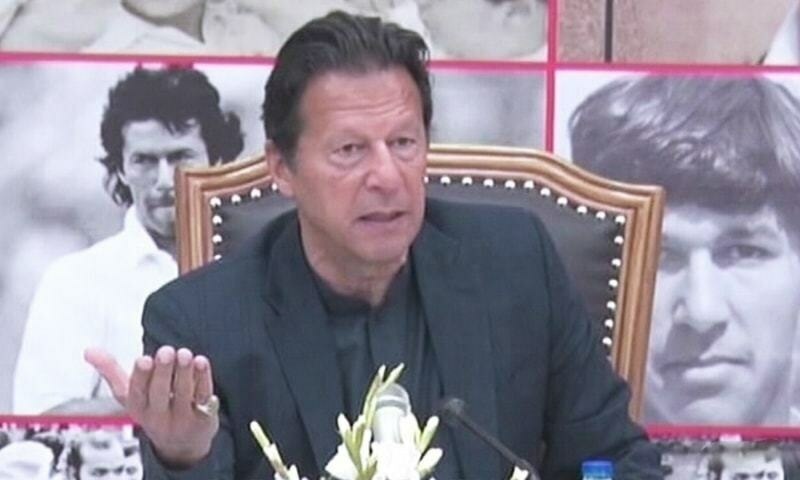 ISLAMABAD: Prime Minister Imran Khan hinted on Thursday that former pri­me minister and supremo of the Pakistan Muslim League-N (PML-N) Nawaz Sharif will not return to the country without first striking a “secret deal” on the issue.

“He [Nawaz Sharif] had also returned to the country from Saudi Arabia [in 2007] under a deal,” the prime minister said while talking to some journalists in the corridors of the Parliament House.

When he was asked about reports that Mr Sharif could return to the country soon, Mr Khan said: “When he [Nawaz] had gone to Saudi Arabia, we used to hear that he was [either] coming today or tomorrow.”

In response to a question regarding speeches by Leader of the Opposition in the National Assembly Shehbaz Sharif, the prime minister said: “[A] speech of Shehbaz Sharif is like his job application.”

Insists his government is not in trouble; PTI to hold its elections next year

He said his government was managing its affairs well and was under no threat from the opposition. “The government is not in trouble,” he remarked.

Earlier in the day, Prime Minister Khan presided over a special meeting of the federal cabinet that approved the Supplementary Finance Bill 2021, which was subsequently introduced in the National Assembly by Finance Minister Shaukat Tarin.

In a tweet on the matter, federal Information Minister Fawad Chaudhry said the cabinet had approved the finance bill and it would be tabled in the National Assembly.

Prime Minister Khan also presided over a meeting of the Pakistan Tehreek-i-Insaf’s (PTI) parliamentary party where Mr Tarin explained features of the finance bill and responded to the legislators’ queries about amendments to the State Bank Act.

After the meeting, Foreign Minister Shah Mahmood Qureshi told journalists that it was the parliamentarians’ right to be acquainted with the legislation about to be tabled in the parliament.

In response to a question, he said parliament was empowered to amend any law with a simple majority, if required, to remove any lacuna in it.

The meeting of the PTI’s parliamentary party was attended by cabinet members as well as other members of the parliament.

The prime minister also chaired a meeting of the PTI’s Central Executive Committee (CEC), which decided the party would hold its elections in 2022 under its slightly amended constitution of 2015.

The information minister told Dawn the meeting declared the recently formed 21-member committee for formulation of the party’s constitution as the CEC of the party.

He said the party would make slight changes in its constitution of 2015 after which the polls would be organised.

Mr Khan had dissolved the party’s organisational structure after its recent defeat in the first phase of local body elections in Khyber Pakhtunkhwa. He had also formed the 21-member committee to amend the party’s constitution.

A Piece Of History: The Bass Amp That Gave Away Osama Bin Laden’s Position To U.S. Forces While He Was Teaching Himself To Play ‘Higher Ground’ By The Red Hot Chili Peppers Is Coming To The Smithsonian