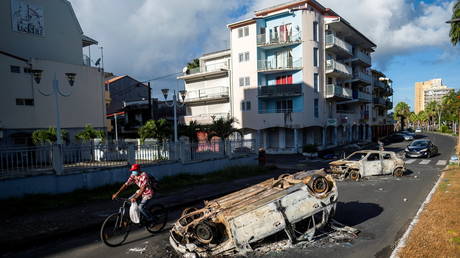 The mayor of a city hit by protests over Covid-19 restrictions on the French overseas territory of Guadeloupe has called on Paris to restore peace on the island after an arms depot was looted amid the unrest.

Speaking to France Info radio on Monday, Pointe-a-Pitre Mayor Harry Durimel said there were “big worries” on the island, as rioters now had guns after the arms depot was broken into on Sunday. The media reported that rifles were taken from the depot located in the coastal city.

“We just don’t know how far this will still go,” Durimel stated as he called on France to restore peace and order on the Caribbean island. The mayor said he could still hear noise from protests outside as he spoke in the early hours of the morning.

The island has descended into chaos after labor unions organized walkouts last week to challenge Covid-19 restrictions, including the introduction of mandatory vaccination for health workers.

French Prime Minister Jean Castex is meeting with Guadeloupe lawmakers on Monday to attempt to resolve the crisis.

Schools and colleges will not welcome students on Monday with the protests ongoing and many roads blocked by rioters. According to the president of the local chamber of commerce, Patrick Vial-Collet, more than 80 businesses have been looted since the protests began.

France has sent some 200 police officers and gendarmes from the mainland to the island and introduced a night curfew in an attempt to quell the unrest.

According to French media, unions on the island of Martinique have called for a general strike, raising fears that the unrest could spread to other French island territories.

Why On Earth Are Orioles Reportedly Willing To ‘Listen’ On Cedric Mullins?