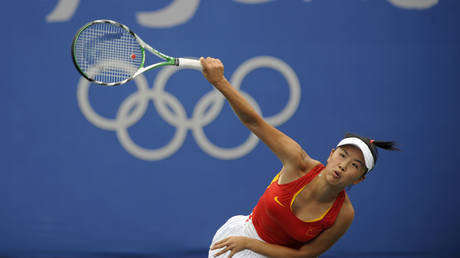 An athletes' group has accused Olympic bosses of pretending that Peng Shuai never made sexual assault allegations against China's former vice premier, drawing parallels between the scandal and the execution of a wrestler in Iran.

International Olympic Committee president Thomas Bach claimed Peng was "doing fine" during a 30-minute video chat on Sunday, although no mention was made of the troubling sexual assault allegations she made against former Chinese Communist Party top dog Zhang Gaoli.

In a lengthy social media post that was removed within 30 minutes before she appeared to disappear from public view for three weeks, former doubles champion Peng accused Zhang of attempting to force her to have sex with him as part of a long abusive relationship which also involved his wife.

A succession of photos and videos showing Peng were released via Chinese state-affiliated media over the weekend, leaving skeptics as unconvinced as they were by an initial purported statement from her that was widely regarded not to have been written by the 35-year-old.

"We are relieved that Peng Shuai is alive but the IOC’s confirmation of a call with the tennis star does not ensure her safety or wellbeing," responded the campaigning Global Athlete group in a statement.

"The IOC’s press release is a harmful attempt to appease both concerned athletes and the Chinese authorities.

"The IOC showed a complete disregard for allegations of sexual violence and abuse against athletes.

"By taking a nonchalant approach to Peng Shuai’s disappearance and by refusing to mention her serious allegations of sexual assault, IOC President Thomas Bach and the IOC Athletes’ Commission demonstrate an abhorrent indifference to sexual violence and the well-being of female athletes.

"The release pretends that Peng never made sexual assault allegations and has not been missing for more than two weeks.

"The statements make the IOC complicit in the Chinese authority’s malicious propaganda and lack of care for basic human rights and justice.

"Bach extended an invitation to Peng for dinner rather than ensuring her safety, and by doing so he made a mockery of a deadly serious situation that is regrettably all too familiar for many female athletes."

The group is calling on the IOC to "immediately" suspend the Chinese Olympic Committee until Peng is given "safe passage out of China" alongside a full investigation into the allegations.

In an earlier statement, the group likened the scandal to the execution of wrestler Navid Afkari in Iran in 2020 after he was convicted of murdering a security guard during the 2018 Iranian protests.

"The IOC tried 'quiet diplomacy' in Iran and failed," it claimed. "The result was the execution of [Afkari].

"China is using Peng’s sport popularity to silence athletes and the people of China. Retribution towards athletes for using their voice must never be tolerated.

"As China prepares to host the Olympic Games, every athlete is watching to see what action the IOC will take to protect athletes and their fundamental human rights."

Women's Tennis Association chief Steve Simon reiterated over the weekend that his organization's relationship with China is "at a crossroads" over the saga.

World number one Novak Djokovic has backed the potential withdrawal of events from China if Peng's safety is not conclusively demonstrated.

"Athletes and the international political community must hold the IOC accountable for their actions."

Andrew Garfield says Ryan Reynolds got 'lost in my eyes' during their 2017 Golden Globes kiss: 'I felt it'