A rider and coach who was given less than 1% chance of surviving a serious head injury sustained in a fall has been honoured for her resilience and determination as she returns to work.

Jane Cherry, is back at work at Washington Riding Centre, home of the Tyne & Wear Riding for the Disabled Association group, some three and a half years after her accident.

Jane told H&H she suffered a serious bleed on the brain stem in her fall from a four-year-old mare at a dressage show in April 2019.

“We’d done our first test, and come second, and were in the warm-up waiting for the next class,” she said. “I don’t remember any of it but from what people have told me, the mare just went down”.

Jane was put in an induced coma on the scene and taken to hospital, where her husband and family were told there was very little hope of her recovering.

But three weeks later, on the third attempt to bring her round, Jane regained consciousness.

“I remember clearly waking up, looking at my husband and saying ‘Oh, hello’!” Jane said. “I can’t remember asking about what had happened to me, it was like I knew, although no one had told me, and it was all a bit odd. I feel quite ungrateful because people have told me they came to visit me, took me out for walks and things, and I have no memory of it at all.

“I was oblivious to it all, and feel so sorry for my family because they had to cope with being told I wasn’t going to survive, then I was in hospital for four months and my husband had all the rigmarole of driving backwards and forwards every day and he never complained, bless him, although he does plenty now!”

Jane underwent physio treatment in hospital, learning to walk again — “I’d thought I was walking quite well!” she said — and was eventually sent home with a walking frame.

She is now back at work, part-time, and back in the saddle, something that happened rather sooner than her doctors had expected.

“I was back on after three months; I couldn’t remember anything that had happened so had no fear of falling, and when I saw the consultant after six months, he said ‘We’ve got to the point now where you can start thinking about riding’. I said I’d been riding for three months and he held his hands up and said ‘Don’t tell me, I don’t want to know!’”

Jane is still experiencing the effects of the injury in other ways. She has fatigue, so she has to have 10 hours of sleep every night, as well as “nanna naps” during the day. She has constant double vision, which is also tiring, and her memory is not what it was.

“People have said it can take up to five years for things to get better so I hope that improves,” she said. “But I can function, I can ride and I’m back at work. My mother’s 86 and just out of hospital so I’m looking after her, myself, the dog and my husband. I think I’m doing all right.”

Jane added that it was horses who helped get her through.

“They’ve got me back to where I am,” she said. “My horse Red, who I’ve had 15 years, has been such a sweetheart. She’s really hot and feisty but I think she knew. I’ve seen other horses who play up for able-bodied riders but with an RDA person on board, they’re so calm. I could tell Red knew — but in the last month or so, I’ve seen the feistiness come back so she must think I’m better. I’ve had the thumbs up from Red, and that makes me happy.” 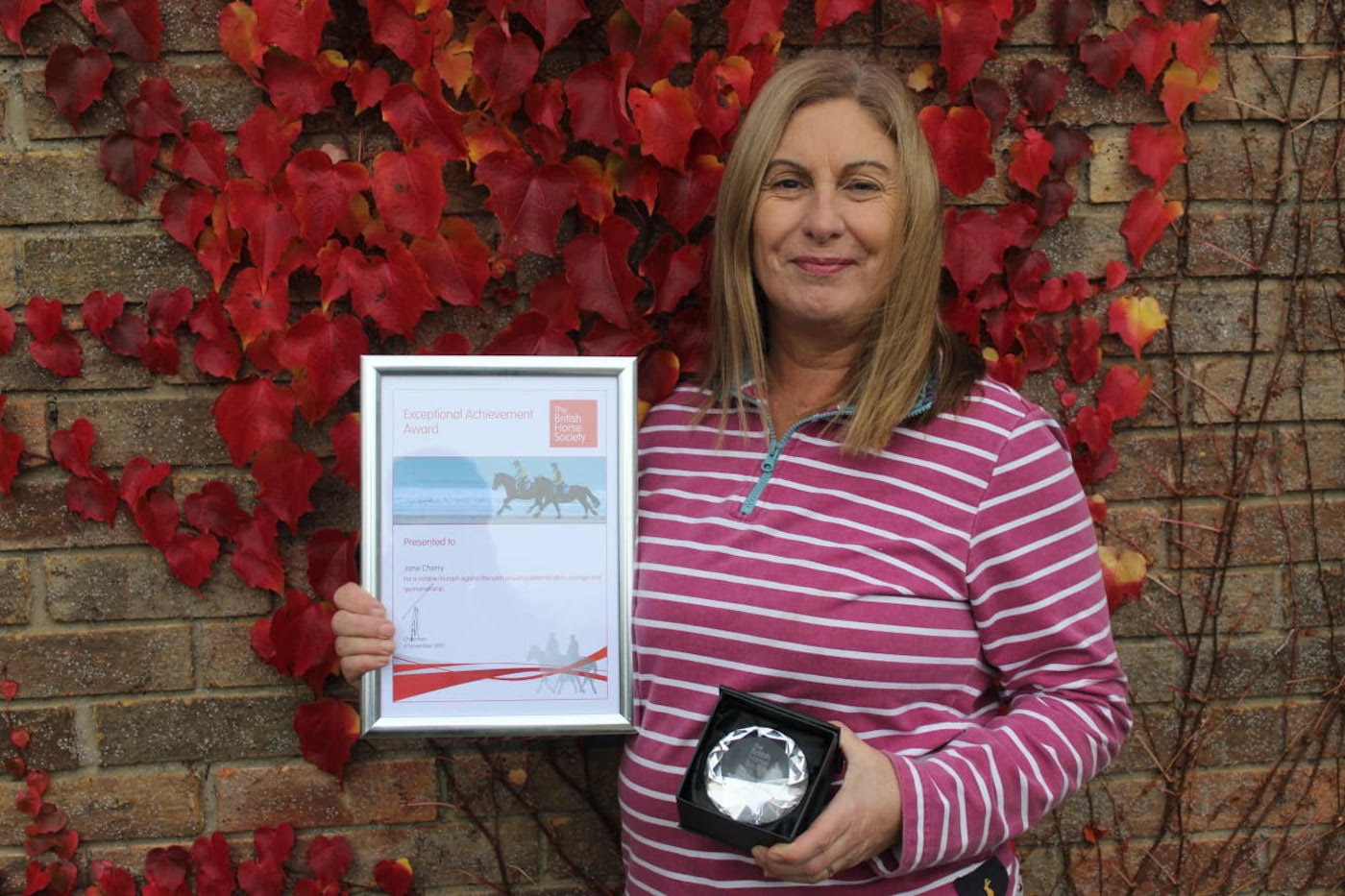 “It was a total surprise,” she said. “A girl I’d taught for years entered me for it last spring, didn’t hear anything and forgot about it. It was lovely because she then got the call on my birthday to say I’d won.

“There was a ceremony at the racecourse, Princess Anne was there, and we had a lovely meal and watched all the racing. But to be honest, I wasn’t sure I really deserved the award!

“I don’t think I’ve really done anything or been any more proactive than anyone else would have been but I’m back at work, I’m riding and doing all the things I used to do. As I was given a 1% chance of survival, I think I’ve done quite well, and the BHS agreed. It was nice for someone to say ‘You’ve done ok’.”

A BHS spokesman told H&H: “We’re delighted that Jane has won this award. Jane has shown outstanding resilience and has remained dedicated to working with horses and the Washington Riding Centre (RDA) since volunteering there as a child.

“Beating the odds, Jane has returned both to riding and her position as centre manager and is continuing her excellent work to bring structure, fun and community to the centre.”

The mare Jane was riding at the time of her fall was later diagnosed with wobblers syndrome and had to be put down.