Anyone who knows my wife, Gena, and I, knows we are big supporters of our military and our veterans. When I discovered what three tenacious 93-year-old veterans did, I just had to share their story and salute them. You'll definitely be inspired!

WNCT reported last week that Texas native Pat Moore was on track to graduate with his high school class of 1946 when he was drafted into the Air Force just two months before he graduated. After returning from his military service, he went straight to work as a successful crop-duster pilot, but he often thought about obtaining his diploma.

When asked why he didn't finish high school, Moore simply explained to KHOU: "Uncle Sam got me. I got drafted."

He loved his time in the Air Force and said this about learning to fly: "I started flying when I was a junior in high school because … I just liked it."

Moore explained that he tried to get his diploma a few times over the years, saying, "I had written to them inquiring about it, of just what could I do to get a license, I mean, a diploma."

As fate would have it, Texas law allows students who were drafted before graduation to later come back and receive their diploma.

Carol Nelson, Alvin ISD Superintendent, explained: "The board will present him with his diploma. He will actually wear a gown, an Alvin High School graduate gown, and we have some special surprises planned for him."

One of Moore's special surprises was that his great-granddaughter was graduating with him.

IHeart Radio reported, "The Alvin Independent School District held a special ceremony for the military veteran on Tuesday, April 13. He wore a graduation gown in Alvin's colors with a cowboy hat, instead of the mortarboard."

"Asides from his diploma, Moore was also given a brand-new letterman jacket since he played football, basketball and baseball for the high school as a teenager."

Moore's response to it all? He simply concluded, "I guess I've waited 75 years for this. It's been a long time coming."

One more proof that good things come to those who wait. 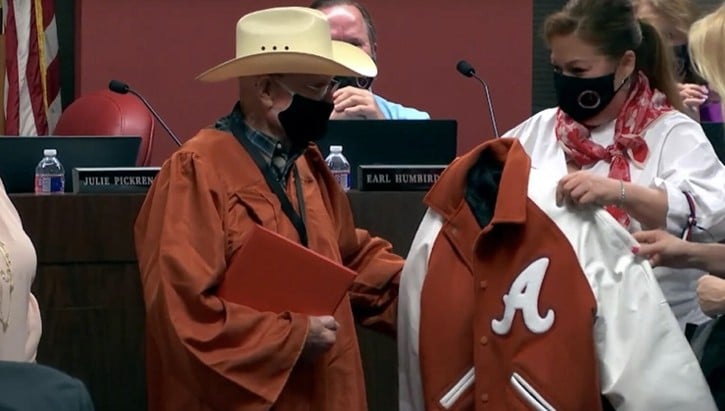 Moore joins a legacy of elderly patriots across the country who have finally crossed the finish line of their education. Two other 93-year-old veterans, James Yarbrough from Virginia and J.D. Sexton from Alabama, also received their diplomas seven decades after being in high school, when their education was also interrupted by World War II. Sexton and Yarbrough served in the U.S. Army during the Battle of the Bulge combat and when Allied troops under Gen. Patton stormed the beaches of Normandy, ultimately liberating thousands of Holocaust survivors. Sexton received his diploma in 2015 and Yarbrough in 2019.

Yarbrough wouldn't boast about his war sacrifices but simply and humbly said after he received his diploma, "It's quite an honor. I never expected such an occasion."

Sexton similarly said with gratitude after his commencement ceremony, "I'm just appreciative of the Lord Jesus for letting me live to be 93. It's a wonderful thing to come up here and be with the people and to receive a diploma for high school education."

Sexton also added this advice for his fellow graduates, "Go forth in life, and put forth all the effort you have!"

I encourage you to watch and listen to these 93-year-old gentle giants, U.S. veterans and patriots in one of their many news broadcasts that highlighted their amazing lives and stories. They give us hope that the American spirit is alive and well and inspire us to keep fighting for life, liberty and the pursuit of happiness no matter what our age.

Moore, Sexton and Yarbrough are a part of those who are among The Greatest Generation, because they fought in WWII and came home to further strengthen America's place in the world. Each of us needs to continue to share the wisdom, wit and work ethic of those great souls with our posterity.

In Tom Brokaw's book titled, "Greatest Generation," he summarized their ethics, conviction and drive: "The WWII generation shares so many common values: duty, honor, country, personal responsibility and the marriage vow, 'For better or for worse' – it was the last generation in which, broadly speaking, marriage was a commitment and divorce was not an option."

And regarding their zest for life, Brokaw said we can learn from their philosophy of life: "In your pursuit of your passions, always be young. In your relationship with others, always be grown-up."