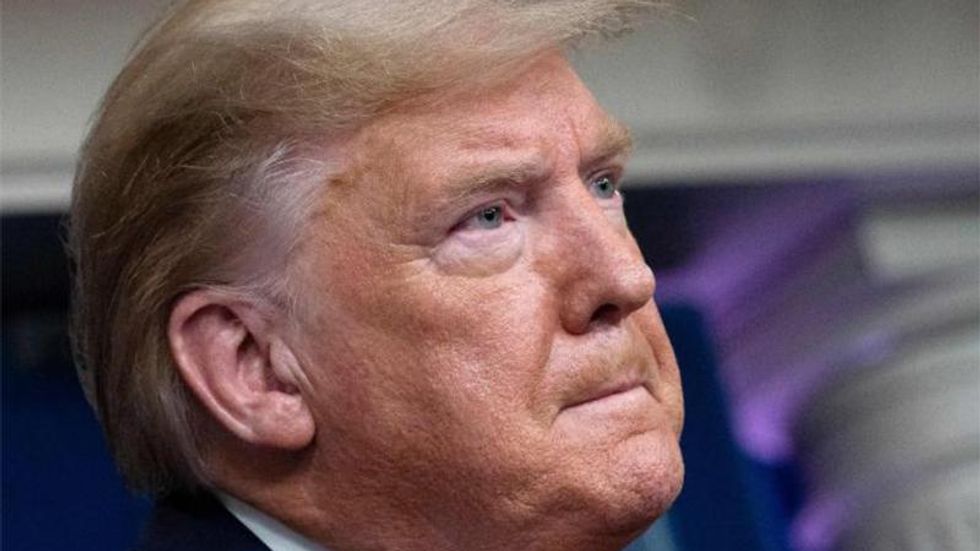 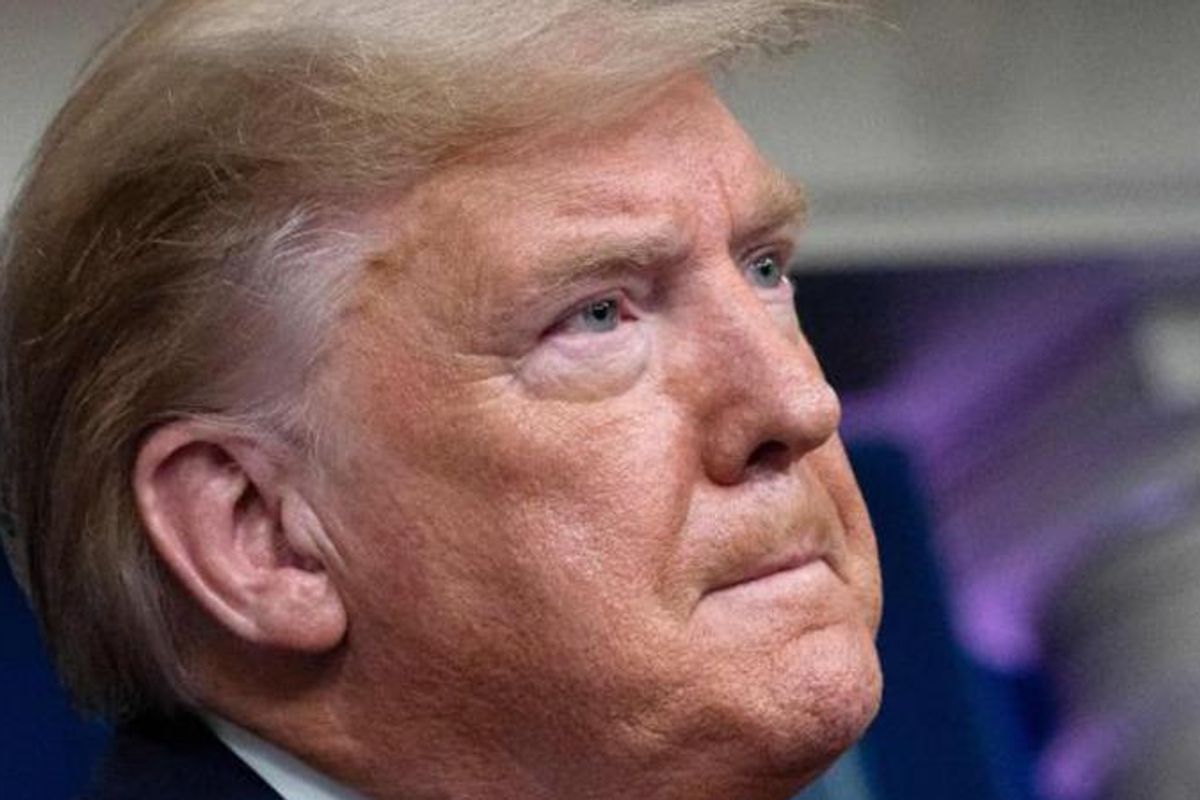 We're still piecing together the fragments of reports, pictures, and videos from the harrowing siege of the U.S. Capitol last Wednesday, an event that threatened to upend democratic governance and dashed hopes for a peaceful transfer of power. As new information had come forward, the attack on Congress during the counting of the Electoral College votes look even more coordinated and dangerous than it initially appeared.

And as the push for a second impeachment of the president gains steams, Donald Trump's role in the attack is coming into focus.

One of the drafts of articles of impeachment, titled "Incitement of Insurrection," charges: " Donald John Trump engaged in high Crimes and Misdemeanors by willfully inciting violence against the Government of the United States." It adds: 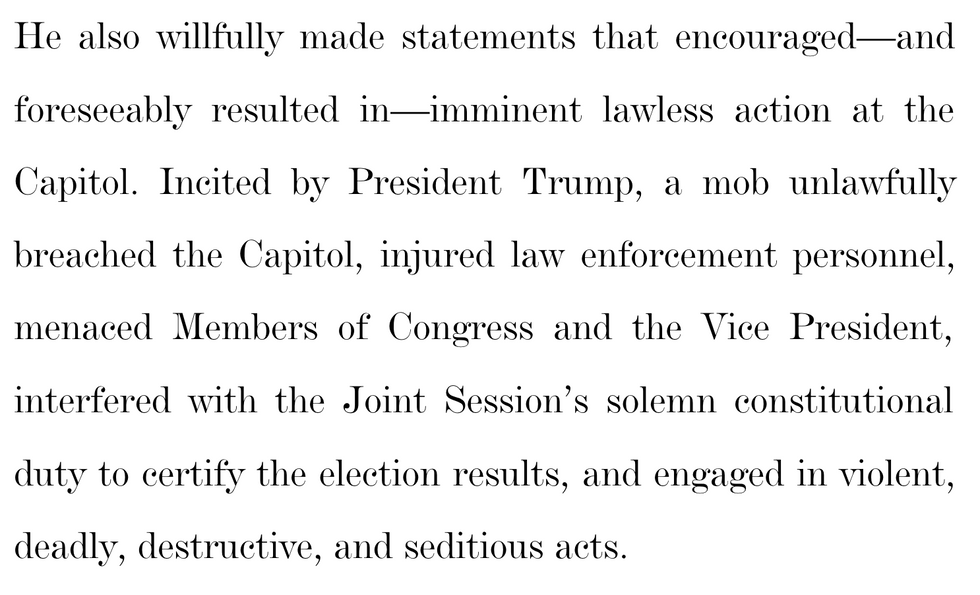 This is all true and persuasive — even former Trump allies such as ex-Chief of Staff John Kelly said: "What happened on Capitol Hill yesterday is a direct result of his poisoning the minds of people with the lies and the frauds." Kelly said that were he back in the Cabinet, he would vote in favor of using the 25th Amendment to remove Trump for this conduct.

But inevitably, Trump's defenders will say it's unfair to accuse him of inciting something he couldn't control. He didn't explicitly say the rioters should disrupt Congress's counting of the Electoral College votes, and we can't know what he really intended, they'll say, so it would be unjust to impeach him on these grounds. They made very similar arguments during the first impeachment.

To counter this argument, however, Democrats could appeal to the clear timeline of events that shows Trump doing more than just inciting a riot or insurrection. The sequence of events provides indications of Trump's intentions and paints them in an unflattering light. More than simply inciting a crowd to violence, his conduct is better understood as another former ally — ex-Attorney General Bill Barr, of all people — described it: "Orchestrating a mob to pressure Congress."

Here's the series of events:

Relatedly, reports continue to emerge about the fact that deployment of the National Guard was severely delayed in responding tothe siege, allowing the mob to break through the barricades. It is not clear, at this time, what role Trump played in those events.

But the timeline as laid out above tells a clear story. Trump and his allies spread false information about the election for weeks, even though they were warned it was dangerous. Their rhetoric became more heated and incendiary. Trump organized around the Jan. 6 date as his followers became increasingly radicalized, and he placed public pressure on Pence to overturn the election, even though he was told repeatedly the vice president had no such power. When he riled up the crowd on Jan. 6, he had already reportedly been told that Pence would not be doing what he wanted — but he set his supporters up for disappointment anyway. Then, once the Capitol was breached, he continued making his demands — to Pence on Twitter and to Tuberville over the phone — to do his bidding and overturn the election. When he talks to McCarthy, he forced him to beg to call off the rioters. Despite repeated requests for him to call off the mob, which he could have done with a single tweet, he refused for multiple hours.

Multiple reports, from Haberman as well as GOP Sen. Ben Sasse, describe Trump as being enthusiastic or "delighted" while the siege of the Capitol unfolded.

This shows that what Trump was doing was more than just incitement. He was using the mob and the storming of the Capitol for a targeted purpose. He hoped he could use it to pressure Congress and the vice president into overturning the result of the election. He even admitted his plan openly, telling the crowd, "We're going to have to fight much harder and Mike Pence is going to have to come through for us" and, "We're going to try and give our Republicans — the weak ones, because the strong ones don't need any of our help — we're to try and give them kind of pride and boldness they need to take back our country."

Eventually, he relented, as it became clear his plan wasn't working, his allies were turning on him, and he faced serious legal exposure. But the damage to democracy was done, many were injured and traumatized, and five people, including one member of the Capitol Police, were killed in the chaos.

You’ve been doing the washing up all wrong, here’s the RIGHT order to get things clean in