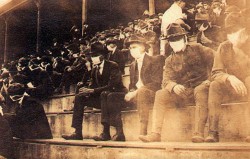 The Conv
Near the end of the First World War, a deadly flu raced across the globe. The influenza pandemic became the most severe pandemic in recent history, infecting about one-third of the world's population between 1918 and 1920 and killing between 50 and 100 million people. It was caused by an H1N1 virus that originated in birds and mutated to infect humans.
﻿

How hairdressers will look when they reopen on July 4