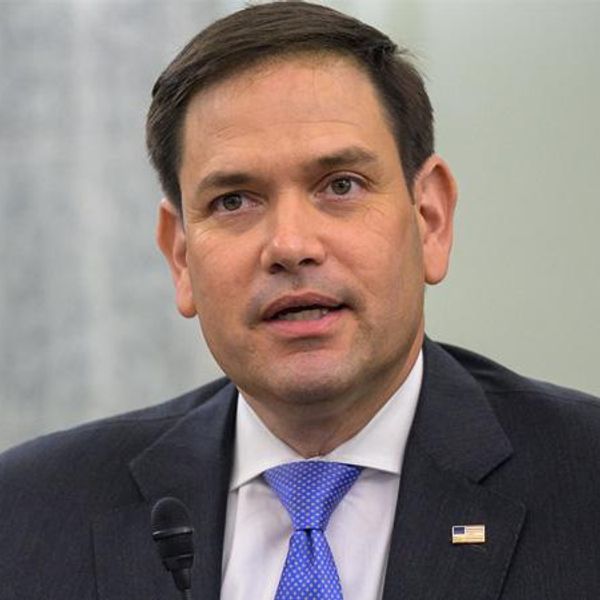 On Tuesday, POLITICO reported that Sen. Marco Rubio (R-FL) has confirmed he met with an indicted former Florida congressman to discuss Venezuela policy — without realizing he was working with the dictator of Venezuela.

"Sen. Marco Rubio acknowledged on Tuesday through a spokesperson that he met with indicted ex-Rep. David Rivera to discuss a potential deal to normalize relations between the United States and Venezuela — but didn’t know that his one-time friend and long-time political ally was working on behalf of strongman Nicolás Maduro," reported Gary Fineout. "Rubio’s dealings with Rivera emerged Monday night after federal authorities arrested and charged the former Miami lawmaker with eight criminal counts, including money laundering, conspiracy and failing to register as a foreign agent for work allegedly connected to the Maduro regime."

"An unsealed indictment states that Rivera and an unnamed U.S. senator from Florida met in July 2017 in Washington to discuss a possible deal with Maduro in which the Venezuelan leader would agree to 'hold free and fair elections in Venezuela,'" said the report. "The senator was not identified by name, but Rivera and Rubio have known each other for years and once owned a house together in Tallahassee."

Rubio, who was recently re-elected overwhelmingly in the 2022 midterm, has spent his career publicly condemning the Venezuelan regime, which is known for political repression and the widespread starvation of its people. Many refugees of the communist South American state have settled in South Florida.

The Biden administration itself has recently moved forward with a plan that would ease some sanctions against Venezuela, including allowing Chevron to restart its oil business in the country, in return for Maduro resuming talks with the opposition to hold fair elections.

I’m a millionaire at 25 – my money drives the haters mad, folk in my tiny Scottish village wonder how I’m so rich

Tech CEOs screwed up, and it's time to hold them accountable

Valentine’s Day Roses 2023: Where to buy the best and cheapest Valentine flowers