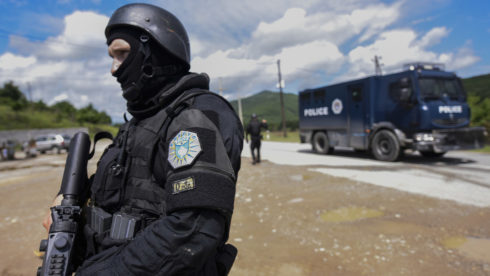 Illustrative Image: A member of the Kosovo Police Special Unit near the village of Cabra during the May 28, 2019 raids in the predominantly Serb north of Kosovo. IMAGE: AFP / Armend Nimani

Special forces of the partially recognized Republic of Kosovo broke into the premises of the election commission in the city of Kosovo-Mitrovica and destroyed it, director of the Office for Kosovo and Metohija under the Government of Serbia Petar Petkovic said on Twitter.

The Kosovo military wanted to place an election commission loyal to Pristina in the premises.

“The people are furious, but they do not intend to succumb to the provocations of [Kosovo Prime Minister Albin] Kurti!” Petkovic wrote.

There are two administrations in the city of Kosovo-Mitrovica, where mostly Serbs live. The Serbian authorities de facto control the northern part of the city, but the Kosovo authorities are in control of the southern part, which is mainly inhabited by Albanians.

On November 5, the leader of the Serbs in Kosovo and Metohija announced the withdrawal of the Serbs from all the public institutions of the republic. The President of Kosovo, Vesa Osmani, then scheduled early elections for December 18 in the north of the region: in Leposavic, Northern Mitrovica (the northern part of Kosovska Mitrovica), Zubin Potok and Zvecan. The political representatives of the Serbs announced a boycott.

On December 6, the President of the self-proclaimed Republic of Vyosa Osmani announced Pristina’s intention to apply for EU membership at the end of the year, despite the fact that five EU countries still do not recognize Kosovo. The claims were made on the sidelines of the EU-Western Balkans summit in Albania.

The post New Round Of Escalation In The north Of Kosovo appeared first on South Front.