THEY’RE both glamour girls with a history of getting into trouble with dresses.

But today Amanda Holden became Marilyn Monroe for a new shoot, sharing a glimpse at her astonishing makeover with fans.

At 51, Amanda is some years older than Marilyn – who died when she was just 36 – was, but she looked just like her.

The star captioned a sultry behind-the-scenes of her as the movie icon simply: “#bts me as #marilynmonroe.”

Fans were delighted with the glam transformation, writing: “Omg move over Marilyn” and “Stunning 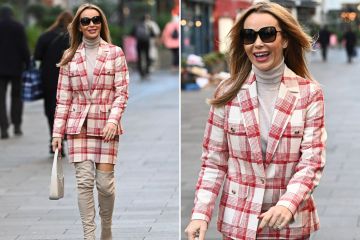 Another said simply: “Ah would you stop. I can’t handle the hotness.”

Amanda is no stranger to causing controversy in eye catching outfits.

Not only has she posed as historical figures before – once posing in a bath as Cleopatra – her dresses on Britain’s Got Talent have been a hot topic for years.

One she wore in 2017 received 663 Ofcom complaints – which Amanda swiftly dismissed as “laughable”.

She joked: “It’s been called another national ­crisis – but, oh no, I will not be covered up.”

In 2020, Amanda had two rounds of complaints sent to Ofcom after viewers claimed she had exposed her nipple on TV.

aShe replied: “Mmmm, really? Who has nipples this close to their cleavage? FYI, a boned corset dented the girls all night.”

Amanda will soon have a new co-host on Britain’s Got Talent, after David Walliams stepped down from the panel.

A source told The Sun: “David has decided to bow out after a ten-year run. He wants to leave on a high after a wonderful time.”

They added: “He hasn’t taken the decision lightly, but it feels like time to move on and focus on his other projects.”