MATT Hancock’s girlfriend Gina Coladangelo has revealed she thought the MP was going to be eliminated long before the final.

The controversial contestant finished in third place, fairing far better than even he had hoped.

And lobbyist Gina, who flew to Australia to support Matt, was no different, admitting she thought he’d be out at each eviction show.

Speaking ahead of the final in scenes to be aired in tomorrow’s Coming Out Show, she said: “I thought Matt was leaving the jungle everyday so I am pleasantly surprised he’s made it this far.”

When it was eventually Matt’s turn to leave the jungle across the treetop bridge in a blaze of glory, he gave Gina lots of compliments.

He said: “You look amazing, I love you so much. I’m so sorry it’s been this long. It’s going to be great from here on in.” 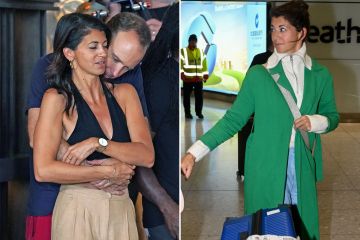 In the car on the way back to the production site Matt asked: “Of course I’m curious to how it’s gone, was I authentically me?”

Gina said: “It took a few days I felt for you to relax.”

Matt replied: “When I was being grilled in the early days, I felt like people were asking me on behalf of the British public. I knew going in it would be controversial but I also know millions of people have voted for me.”

The self-confessed karaoke fan belted out an Ed Sheeran track later in the journey, much to Gina’s embarrassment.

Stacey Solomon rapped for Insta post after complaints from fans

Keen for more feedback back at the hotel, Matt asked: “Did I look cool doing the Terminator walk?”

Gina diplomatically laughed: “It was special.”

While the reunited couple couldn’t keep their hands off each other, including at the series wrap party, they ended up on separate flights home.

We revealed Matt didn’t return to the UK with Gina because he had a big-money interview to see to first.

However, he ended up being homeward bound just six hours after his other half.

I’m A Celebrity…Get Me Out Of Here! The Coming Out Show tomorrow at 9.15pm (Thursday) on ITV1 and ITV Hub