John Ryder was a couple of days removed from his fifth-round win over Zach Parker in a fight that promised much but delivered little after Parker withdrew with a badly damaged hand.

Ryder is now a rumoured foe for Saul ‘Canelo’ Alvarez, but it wasn’t the manner of victory the Islington man was hoping for, even if the result was.

“In the past, I’ve boxed four or six rounds with a busted hand, ended up fighting one handed and still getting a kayo with three hooks… and Ricky Burns fought 10 rounds with a broken jaw… and I’ve boxed 10 rounds with a cut eye and had to completely change the tactics,” Ryder reasoned. “To fight a switch-hitter [like Parker is] as well, if one hand goes, you switch stance and go with the other, surely, but it just went, and then he went.”

Ryder felt he was getting on top of the clash in London’s O2 Arena last Saturday, before the sudden end came.

“I’d caught him with a big left hand, his gumshield had gone flying, and I think I landed a similar shot straight after, I don’t know…” Ryder continued. “The signs of a strong-willed fighter just weren’t there, and I felt that in the build-up as well. I didn’t feel like he had it to go to the well to survive in there. I’m all for safety first, I’ve seen way too many injuries in the past, but I feel like it can only have been that round that he got that injury, so get back to your corner like he did and rightly so and normally you’d tell a corner and they’d be eager to pull you out, but it seemed he was more eager to pull himself out and say, ‘That’ll do.’”

Ryder’s win capped a strong 2022 for the London southpaw following his narrow victory over Danny Jacobs back in February and he’s now fresh for what 2023 brings.

“After a 12-week camp, the fight was the easy part,” John added. “I was prepared for a hard 12 rounds, expecting the best of Zach Parker and I was fully prepared for 12 rounds and to only go to the start of the fifth was a shock to me. But I felt the tide was turning. I felt like I was turning the screws as such and I felt that two or three more rounds and I’d have been well on top and it would have been stopped. It’s not that I’ve been robbed of a decision but robbed of that grandstand victory, I suppose.”

It was an innocuous finale to a contest that had British fight fans excited. Derby’s Parker was unbeaten and had been due to fight Demetrius Andrade in recent times. Ryder has been operating at a high level for years, and even in victory he found the whole evening anti-climactic.

“We all want to go out on our shield, put on a great fight for the fans, and it’s about the fans because they pay the wages,” Ryder continued. “But it is also about getting in and getting out with no injuries and fighting another day, and to an extent we’ve both done that… But it’s not what the fans want to see. It does leave a sour taste in their mouth.”

Of course, Ryder is now poised for a big contest in 2023; perhaps a fight with the Mexican franchise Canelo. It is certainly a fight the Englishman covets.

“I spoke to [promoter] Eddie [Hearn] the other day and he said he’s made contact to Eddy Reynoso to make the Canelo fight for May, but Canelo’s going to do what Canelo wants to do, isn’t he?” Ryder explained. “If he wants to fight for the light-heavyweight title next, he’s going to do it. I know they want to unify the light-heavyweight division but it’s quite busy at the moment, with Yarde fighting Beterbiev, Bivol’s going to want to fight the winner, so that’s slowing down proceedings and Callum Smith is in line for Bivol’s title, so there’s a few obstacles in the way and hopefully the WBA call a mandatory, he [Canelo] fights me in May or Eddie can do the negotiating and get it set.”

The fight would do brisk business in the UK, but Ryder concedes it will be hard to bring the Mexican to north London at all, let alone for Cinco de Mayo weekend next year. 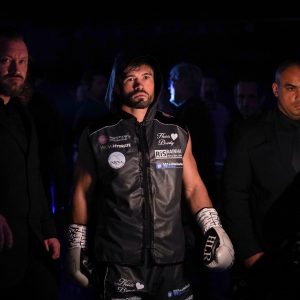 “I’d go to Guadalajara, Vegas would be good, Emirates [stadium, where soccer side Arsenal play their home matches] would be amazing, imagine getting Canelo to the Emirates, it would be something else. I think the Emirates is a bit optimistic, what with the World Cup on now that means the Premier League season will be extended so I don’t know that it could fit into the schedule of home games or that they could deal with it. How many Mexicans have they got on Holloway Road? It would be great for Islington to get that [fight] in town, it would be a new experience, but I’m not sure how many Mexicans would come to the UK for the Bank Holiday weekend.”

But Ryder is not too worried by what is next, or even when. He’s wrapped a long camp and a big year and he’s in a strong position for 2023. Now he can relax with his friends and loved ones until the call comes, whether it is Canelo or any of the other big guns at 160.

“I’m happy enough to sit back, get Christmas out the way…” Ryder stated. ‘I’d like to go into Christmas knowing what’s next but boxing’s a hard game, we are away from our family enough and it just so happens this year I can enjoy Christmas, enjoy family time and indulge that bit more. I’ve not been able to in the past because I’ve been fighting at the end of January-early February, so I’m going to make the most of that, enjoy family time and look to get back in camp early 2023 and really build on what’s been a good 2022.”

The post John Ryder feels he was denied grandstand finish against Parker, targets big 2023 appeared first on The Ring.

From barges in Venice to robots in China, packages reach their final destinations in many different ways around the world. See some of the most unique.