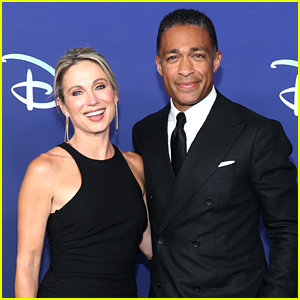 It looks like Good Morning America‘s Amy Robach and T.J. Holmes could be more than just co-workers, and new photos of the pair are now going viral.

In an exposé from Daily Mail, they report that “for the past six months, the married co-hosts have been sharing much more than a mutual love of running and the great-outdoors.” Photos of them include hand holding photos, pictures of them reportedly at each other’s apartments, photos of them at a bar, and photos that apparently show them at an upstate New York getaway two weeks before Thanksgiving.

“Everyone knows that Amy and T.J. have been close friends for a long time now, running together and even socializing as a foursome with each other’s spouses,” an insider told the Daily Mail. “When they were in London together filming the Queen’s Diamond Jubilee for ABC and staff were all over each other and staff were buzzing about the intimacy between them.”

It’s also noteworthy that both TJ and Amy are married to other people. TJ married Marilee Fiebig in 2010 and Amy has been married to actor Andrew Shue since 2010 as well.

Amy and Andrew were last photographed together in May of 2022, and you can see photos of the couples on the gallery of this post. According to Daily Mail, “It is not known when or how Holmes’s wife 44-year-old attorney, Marilee Fiebig, and Robach‘s husband, former Melrose Place actor Shue, 55, learned of the romance, but both couples went their separate ways last August, according to sources.”

An onlooker saw them at a Times Square bar earlier this month and shared, “They were totally into each other. She was giggling at whatever he was saying, and they were looking at each other’s phones. At one point she was kind of dancing in her chair to the music and laughing so hard she practically fell into his lap.”

Fans began suspecting something was up when they both ran the NYC marathon this year as well.

Ja Morant will return on Tuesday against Chicago