WITH 10 hours of sunshine a day, incredible food, sandy beaches, and the world’s largest shopping centre, Dubai is one of Brits’ favourite destinations all year round.

We found the best deals for the top ten hotels in Dubai from £166.40pp a night, as voted by TripAdvisor reviewers.

We found the best deals for the top ten hotels in Dubai from £166.40pp a night, as voted by TripAdvisor reviewers[/caption]

Getting to Dubai from the UK takes around seven hours if you’re flying direct, however, indirect flights can be cheaper if you don’t mind stopping at another destination along the way.

Those can take anywhere between eight and ten hours.

Once you arrive, you’ll be spoiled for choice on what to do next.

You should definitely visit the Burj Khalifa, the world’s tallest building. Cheap city breaks in Europe from £139pp - including flights 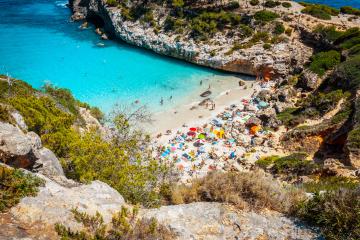 The Top’s outdoor observation terrace is situated on levels 124 and 125 and offers 360-degree views of Dubai’s skyline.

You could also go on a desert safari, riding buggies or camels.

And if you’re after some serious shopping, the Dubai Mall is filled with all the shops you can dream of – plus an ice rink, aquarium and cinema.

If you’d rather book your hotel stay and travel separately, we have also found some good deals on room-only rates.

Located in the heart of the action, the JW Marriott Marquis Hotel boasts 15 award-winning restaurants, bars and lounges.

The Vault Bar is on the hotel’s top floor and features breathtaking views of the Dubai skyline, while Kitchen6 restaurant has six cooking stations serving international dishes.

You’ll also find an outdoor pool with views of downtown Dubai and the Burj Khalifa.

Located in the heart of the action, the JW Marriott Marquis Hotel boasts 15 award-winning restaurants, bars and lounges[/caption]

The Sofitel Dubai is a Polynesian-style resort filled with greenery, with more than 120 plants in the lobby alone.

Guests also get access to a private beach, a boat jetty and a tennis court.

The hotel is great for solo travellers, couples and even families, thanks to the on-site Amura Kids Club.

The Aquaventure Waterpark is just a little over a mile away for more fun around the area.

Situated on Dubai’s Palm Jumeirah, guests at Sofitel The Palm will find an array of restaurants, bars, spa treatment rooms and an impressive six pools[/caption]

The Sofitel Dubai the Obelisk features a mixture between modern French style and ancient Egyptian heritage.

The building is decorated with gold accents and an obelisk, and all the rooms feature air-con, a seating area, a flat-screen TV, coffee and tea-makers.

The hotel also has a swimming pool, fitness centre, lounge and terrace.

The hotel’s restaurant is a luxurious take on British classics, such as fish and chips, burgers, posh bangers and mash.

Guests can enjoy a continental breakfast every morning too.

The Sofitel Dubai the Obelisk hotel has a swimming pool, fitness centre, lounge and terrace[/caption]

The Atlantis The Palm is located on Dubai’s Palm Jumeirah beachfront and boasts some of the best views of the Arabian Gulf.

The hotel features a private sandy beach and complimentary access to the Aquaventure waterpark and Lost Chambers Aquarium.

The Aquaventure waterpark is the biggest in the Middle East and features some thrilling water slides and a dedicated kids’ area.

Available at an extra cost, guests will also have the opportunity to book a helicopter ride for a 15-minute tour around Dubai.

The FIVE Palm Jumeirah has become a landmark in the district and features five outdoor pools, a private beach, a spa and a karaoke room.

One of the hotel’s best features is the 50-yard-long social pool in the heart of the hotel.

There are more than 450 rooms spread across 16 floors, each featuring either city or ocean views.

The FIVE Palm Jumeirah has become a landmark in the district and features five outdoor pools, a private beach, a spa and a karaoke room[/caption]

The water sports include snorkelling and diving, while a games room, access to a tennis court and a kids’ club are also available.

The beach pool villas come with a private infinity pool, and the overwater villa will place you right above the sea.

The Fairmont boasts an impressive number of facilities, with 8 swimming pools, 11 restaurants and bars, and each room has its own private balcony.

The hotel also has a kids club with fun, and educational programs, sports and a splash park for older kids.

While the kids play the day away, adults can relax in the Cigar Room and Mashrabiya Lounge or watch football on the big screens at the VZ Sports Bar.

The Fairmont boasts an impressive number of facilities, with 8 swimming pools, 11 restaurants and bars[/caption]

The Address Sky View is less than a mile from the Burj Khalifa and offers incredible views of the Dubai skyline.

The hotel has two swimming pools, a restaurant, a fitness centre, a sauna and a sun terrace.

The fitness centre includes a yoga studio, high-tech equipment and even personal training sessions, all with a view of the Burj Khalifa.

Every room at the Address Sky View comes equipped with aircon, a minibar, a flat-screen TV and a kettle.

The Raffles Dubai hotel is inspired by Egyptian pyramids and is situated in the city’s heart.

Each room at the Raffles comes with a balcony with views of the Dubai skyline and all the amenities you’ll need.

The hotel has seven restaurants, including a Japanese one and the Raffles Salon serving afternoon tea.

You won’t be short on options to relax and unwind either, with saunas, steam rooms, an outdoor swimming pool and a fitness centre available daily.

The Raffles The Palm is located on Palm Jumeirah’s beachfront, with its private sandy beach.

The beach is more than 550 yards, and you’ll also find an outdoor pool with views of the city and a massive spa.

The spa boasts more than 20 treatment rooms and an indoor lap pool.

When it comes to dining options, you’ll have a choice between Japanese, Mediterranean and an international buffet.

The rooms all feature aircon, a seating area, a minibar and flat-screen TV.

The Raffles The Palm is located on Palm Jumeirah’s beachfront, with its very own private sandy beach[/caption]

You could also bag Disneyland Paris breaks from £119pppn in 2023/24 with low deposits and one-year free Disney+.

Alternatively, for a staycation, we rounded up the best seaside holidays across UK from £7pp a night, including cheap hot tub breaks.

Why this year's COVID is different -- according to experts