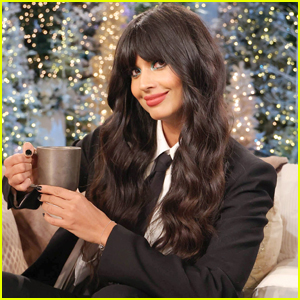 Jameela Jamil is making an appearance on The Jennifer Hudson Show!

On Tuesday (November 29), the 36-year-old She-Hulk: Attorney at Law actress made an appearance on the daytime talk show where she looked back at becoming a DJ at 22 and revealed how she avoided being “sued by Elton John.”

During the beginning of her interview, Jennifer asked Jameela how she met boyfriend James Blake.

“Because I became a DJ I was able to meet another DJ at work, we were working at BBC Radio 1. We were real DJs, and also radio DJs,” Jameela shared. “It was very Hollywood meet cute.”

She continued, “There was a mix-up with our rooms that we were supposed to record in, I met him, and now I’ve been living with him and sleeping with him for eight years. That’s what happens when you say ‘yes’ and try things.”

Jameela went on to recall how she randomly started DJing after complaining about the music at a party. She then met a woman who then asked her to perform at a party hosted by Elton the next week.

“I had a week to learn how to DJ and I just about pulled it off and didn’t get sued by Elton John,” Jameela joked, adding that she then had an eight-year DJ career after that.

In another recent interview, Jameela revealed the NSFW injury she suffered while filming She-Hulk!