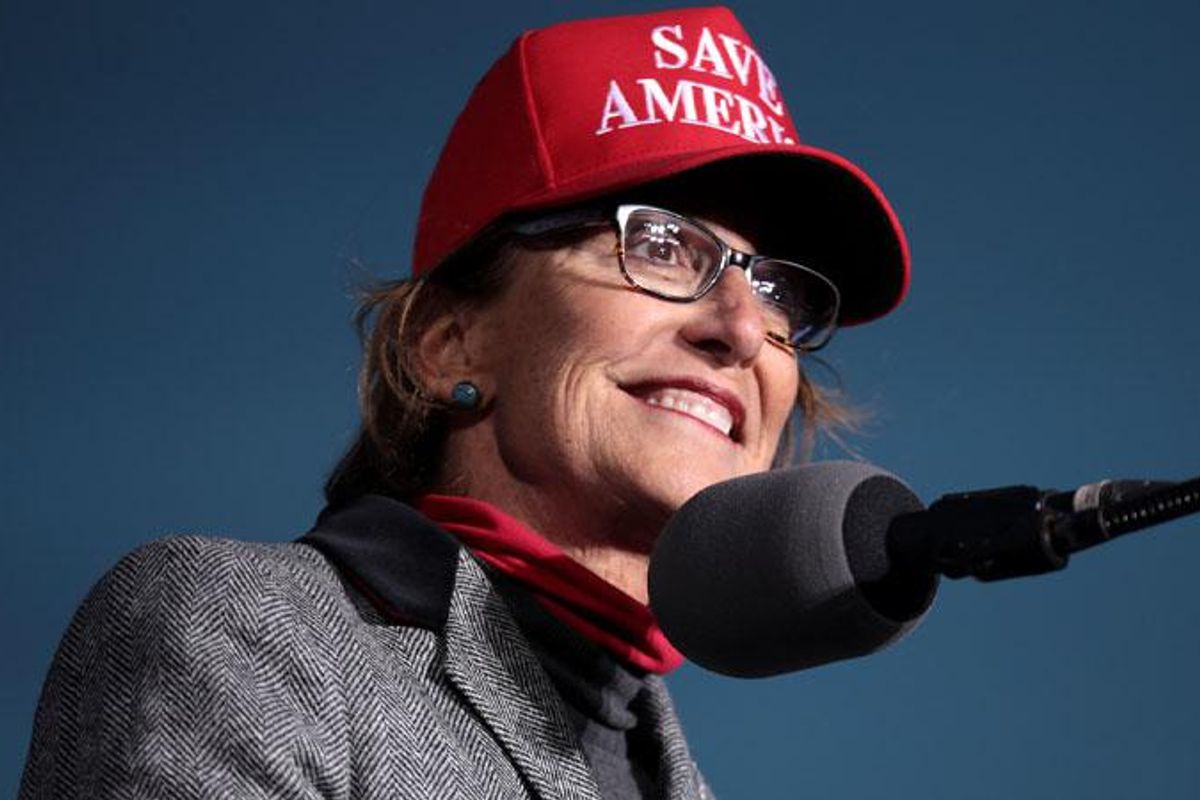 On Tuesday, writing for The Arizona Republic, columnist Laurie Roberts shredded Arizona state Sen. Wendy Rogers for promising Trump supporters she can have the 2022 Arizona election redone, as a fundraising gimmick.

"From the glass half full department, Maricopa County’s vote to certify the Nov. 8 election opens an entirely new grifting opportunity for the election denial industry," wrote Roberts. "And who but our own state Sen. Wendy Rogers to lead the way? Within minutes of the (Republican-run) Maricopa County Board of Supervisors voting (unanimously) to certify the vote on Monday, Rogers had her hand out. 'I am Arizona Senator Wendy Rogers, and I will hold Maricopa County accountable for its election shenanigans,' she wrote, in her fundraising plea. 'Help me get a new election for Maricopa!' And by 'help,' she means send her money."

In spite of all this, noted Roberts, Arizona Senate Republicans have decided to name her chair of the brand new Senate Elections Committee.

"Rogers is perhaps the looniest legislator ever elected in Arizona, an attribute that makes her uniquely qualified to chair a committee that has a roughly 0.00% chance of getting any of her 'election integrity' ideas passed into law," wrote Roberts. "She’s repeatedly called for decertifying the 2020 election, an end to the state’s wildly popular early voting program, the arrest of elections officials for (non-existent) fraud and an entire laundry list of loopy ideas that have made her a national rock star on the hard right."

"Now, suddenly, as Democrats prepare to take over as governor and attorney general, Rogers is vowing to somehow engineer a do-over of Maricopa County’s 2022 election," Roberts said. "That is, if you’ll give her $35 or $60 or heck, fork over $5,300 to her campaign."

Rogers has been a constant source of controversy for the Arizona legislature, even aside from her election conspiracy theories. She has ties to the Oath Keepers, the far-right paramilitary group whose leader was just convicted of seditious conspiracy for the January 6 attack on the U.S. Capitol. She has also defended Alex Jones, the conspiracy theorist webcaster being sued for inciting harassment of the Sandy Hook shooting victims' families, and demanding the right "stand up" for Confederate monuments.

‘All the boxes for a hoax’: Far-right doesn’t buy FBI claim that neo-Nazis plotted to destroy Baltimore’s electrical grid

No indication a Kevin Durant trade request is coming soon

Today24.pro
English Teacher Grades Homework By ChatGPT WIRED I've had this for a week, and it makes me feel better AMSTERDAM Walking tour and city highlights in 4K The Ultimate SAUDI ARABIAN FOOD Tour in Riyadh! 5 Best Restaurants You Can't Miss!