LUKE SHAW has rebuilt himself as one of the best full-backs in the Premier League – and he’ll be heading to the World Cup with England as a reward.

The Manchester United defender has struggled with injuries in recent years but has thankfully been comforted by his stunning girlfriend Anouska Santos.

Who is Anouska Santos?

Very little is known about the blonde beauty, except for her birthday is on May 16.

The couple tend to keep their relationship private – with Anouska’s Instagram account shut off to the public.

But Luke Shaw has posted some snaps of the pair together, including celebrating her birthday at Wireless Music Festival in 2017.

Most Read in Football

There is no official timeline as when the pair started dating, except that it was before May 2017.

The couple regularly holiday together, spending time in Ibiza and New York.

Meanwhile, Anouska is often spotted alongside her footballer boyfriend at events including Man United’s United4Unicef dinner.

They were spotted in a jewellery shop, eyeing up engagement rings in December 2017 – but nothing has been confirmed.

Do Luke Shaw and Anouska Santos have children together?

Luke Shaw and his long-term partner Anouska Santos have two beautiful children together – a boy and a girl.

Reign was born in November 2019 but the official date is unclear, while Storie, their little girl was born in May, 20, 2022. 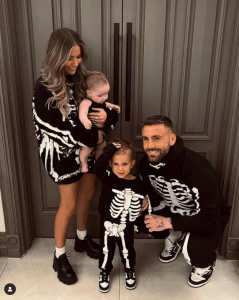 Shaw and Santos have two children together

Is Luke Shaw playing for England?

Shaw, 27, will figure for England at the winter World Cup in Qatar and he’ll be expected to start as he is the ONLY left-back in the side.

The Manchester United defender has earned 23 caps for the Three Lions and has scored three times including during England’s Euro 2020 final loss to Italy.

Shaw will wear the number three jersey which was handed to him during the visit by Prince William.

Today24.pro
‘How many Uber drivers does it take to pick up a disabled person?’: Disabled person says 3 Uber drivers canceled on them because of their service dog I make $1,000 a month by promoting Amazon products on social media. It only takes 5 hours per week — here's how I set up my side hustle. One of The Greatest Britons in History - Joe Calzaghe Crypto Lender Matrixport Raises Valuation to $1.5B Despite FTX Collapse