SUNSPORT’S World Cup columnists Jack Wilshere, Tony Adams and Harry Redknapp kicked off the countdown to Qatar 2022 with a Q&A night in front of fans.

The trio were joined by former England star Ledley King, with our Head of Sport SHAUN CUSTIS asking the questions . . .

WHAT ARE YOUR THOUGHTS  ON A WINTER WORLD CUP?

ADAMS: I got out in time from Strictly Come Dancing so I could concentrate on watching the games!

It’s perfect timing and I’m going to be glued to every game.
Come on, England — let’s hope they can go further than I did on Strictly!

REDKNAPP: It’s strange, isn’t it? We all get ready for summer coming, a World Cup, book our holidays around it and want to watch as many games as we can but I just find it strange. 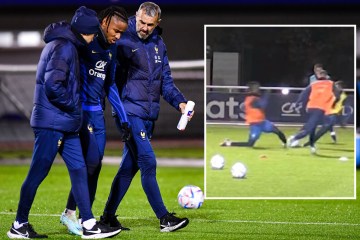 IS THE DEFENCE ENGLAND’S WEAK LINK AT THE TOURNAMENT AND SHOULD HARRY MAGUIRE START?

WILSHERE: I’d play a back four to face Iran but should we look for momentum and go with a three?

You worry about Harry Maguire in a two, Luke Shaw at wing-back and Trent Alexander-Arnold the same.

Against Iran you might get away with it but against better teams we have to go with a back five.

As a manager you have your favourites, players you think you can rely on and Maguire is obviously one of them, so I can see why he has taken him.

He is obviously a leader in that group but I don’t think he can play.
If he does, we have to play a back three or five.

Maguire is not even playing, at least Ben White is. I’d have included Fikayo Tomori and no Maguire.

REDKNAPP: Southgate will never leave Maguire out, there’s no danger of that — he absolutely loves him.

He has never let him down. I think he’s certain to start. He has his group that he believes and trusts in.

IS THIS BUKAYO SAKA’S TIME TO SHINE AFTER OVERCOMING HIS PENALTY MISS AT THE EUROS?

ADAMS: He can redeem himself on penalties like Stuart Pearce did at the Euros. Going forwards, we are the best in the world. Saka is on fire!

He’s pulling Arsenal up to the top of the league, creating goals, scoring goals. He’s a magnificent player so I am positive.

REDKNAPP: If not, he can always get a pizza advert! Stuart Pearce and    Gareth Southgate got a Pizza Hut advert after their penalty misses.

DOES GARETH SOUTHGATE DESERVE THE CRITICISM FOR ENGLAND’S STUTTERING FORM?

KING: Gareth has brought that love back between the fans and players, which has been missing. During my time there was a disconnect. Gareth understands the youngsters. It’s a group that people like and can get behind. We should be proud of them.

REDKNAPP: The criticism of him over the penalty-takers was fair. That was an almighty blunder he made to bring on a couple of kids who had not even warmed up to take penalties. It was strange beyond belief.

WILSHERE: He is what everyone sees, a calm, nice guy and good man- manager. He didn’t give me a chance but he was nice!

I got injured at the wrong time. He spoke to me, was honest and clear.

It’s tough, he will be under big pressure at this tournament. There’s negativity around the team so the first game is massive.

In 2018, it was tough to watch because I wanted to be there, I was annoyed. Me and Southgate never quite had that connection.

WHAT IS IT LIKE TO  GO TO A WORLD CUP?

ADAMS: I was clean, sober and free as a bird in France 1998 and it was wonderful.  When we went down to ten men against Argentina in Saint-Etienne with the atmosphere, I thought, “Oh my God.”

But before that I was so serene and at peace and loved every minute — apart from not being skipper! Glenn Hoddle gave it to Alan Shearer.

The lads played golf every single day and I was thinking, “Lads, rest up, we have a game tomorrow so chill out.” But I didn’t have the power when I wasn’t skipper.

KING: From 2007 I put England to the side to focus on my club. I’d often break down with muscle injuries. Before the 2010 World Cup, Tottenham qualified for the Champions League and it was the first time I felt confident in my body that I could do it.

I knew there was a lot of pressure on me from people saying, “Why are you taking him?”

I played two warm-up games fine but in the first game against the USA I felt my groin go.

I managed to struggle through the first half because I just couldn’t bear to take myself off the pitch. I knew there would be so many people saying, “I told you, you shouldn’t have taken him.”

I cheated my way through and I knew then that was it for my World Cup so it was really bitter-sweet.

It’s every young boy’s dream to  represent your country at a World Cup.

WHAT IS THE BEST CHANCE ENGLAND HASVE HAD TO  WIN IT SINCE 1966?

ADAMS: In 1998, we had so much talent in the country then,. Becks and the Manchester United boys went on to win the treble. But we got done on penalties, fate kind of takes over.

Was it Beckham’s fault? Yeah, of course it was! I went into the dressing room after and he was in floods of tears. I went over to him and joked, “That’s my last-ever World Cup chance and you’ve just blown it”. And he said, “Is he having a laugh here?”

REDKNAPP: You need the breaks. Frank Lampard’s goal against Germany was two foot over the line in South Africa and, if it’s given happened, who knows what happens?

It’s also the luck of the draw. Like in Russia 2018, Belgium ended up in the side of the draw with France and Brazil and we ended up having to face Raggy Arse Rovers, then Croatia, and we thought, “What a chance we’ve got here.”

WHAT’S IT LIKE GOING  BACK TO YOUR CLUB WITH WORLD CUP WINNERS?

ADAMS: In 1998, I went back to Arsenal training with five French World Cup winners. That was really good fun!

WILSHERE: Of course the Germans waved their medals in our faces in 2014. Lukas  Podolski was a character. He reminded us every single day.

REDKNAPP: I played with the ’66 winners Bobby Moore, Geoff Hurst and Martin Peters at West Ham.

They got £1,000 each for winning and I remember Bobby told me they ended up in Danny La Rue’s club, the female impersonator.

They had a table right next to the toilet — the worst in the house and they’d just won the World Cup! It’s a completely different world. They came back and just got on with it.

FINALLY, HOW FAR ARE  ENGLAND GOING TO GO?

KING: We’re going to win it! There are teams in a better place than us right now but we can beat them.

But Argentina have a good balance of being strong defensively and flair going forward.

ADAMS: We’ll get out of the group and, if we get on a roll, who knows?

Portugal will win it for me, though.

WILSHERE: We will get out of the group comfortably but I fancy Brazil.

REDKNAPP: It depends how we set up. We haven’t got a system of how Gareth plays football. That’s a  problem. We’re all up in the air.
I’d go with Argentina — I have a feeling about Lionel Messi.

US Expands Deportation Relief to About 264,000 Haitians

Today24.pro
The Darkest Secret and Tragedy of Edwin Valero In the age of megachurches, communion has become a big business Man repeatedly punched Columbia protester, knocking her out: NYPD Best Android app 2022 – Google reveals top pick for the year and it’s totally free