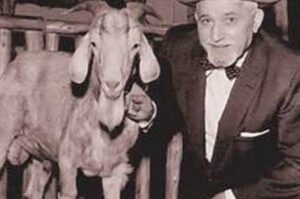 By Diane Batshaw Eisman, M.D. FAAP Doctor Eisman is in Family Practice in Aventura, Florida with her partner, Dr. Eugene Eisman, an internist/cardiologist

The title of this week’s column will become clear as you read on.

It is important for you to know that my favorite sport is baseball. This is mostly the baseball of my youth in Chicago. As a child, I had been to many ball games with the Cubs and with the White Sox. I loved both teams equally but the Cubbies have always held a special place in my heart. Since 1908, my beloved Cubs had not won a World Series. Never slouching (because that would make a win harder for my team), wearing my Cub Emblem socks and having fasted for at least four hours), I would painfully watch my team lose. And then, came enlightenment! I discovered the reason that the Chicago Cubs had not been World Champions in so many years.

And so, in 2016, I avoided all games of the World Series. Sports pages were tossed before I could see them. I no longer watched the news. My Chicago Cubs socks were placed at the bottom of my sock drawer. I even did the most horrifying thing! Those socks were tossed into the washing machine. As much as possible I kept thoughts of The Cleveland Indians from my mind. And it happened!

The Chicago Cubs outplayed the Cleveland Indians four games to three. Around midnight on November 3, 2016, Cubs fans walked out of a stadium in Cleveland, singing “Go, Cubs, Go!”

I put on my socks and joined the chanting. In my heart, I knew that the Cubs had won because I had not watched them play. Baseball has a lot of superstitions; more than most sports and my own was merely one of a small number. When watching a no-hitter, you must never, never, never mention that a perfect game is in progress. You could jinx the pitcher. When you are leaving or entering the field, please do not step on any of the chalk lines or you will have horrible bad luck during the game.

Never jump over a foul line. I don’t know what could happen, but it would be bad.

Be aware of what you eat before a game, because some meals are lucky for certain players. Like Wade Boggs who would eat fried chicken before a game, and Ryan Dempster, who ate at the same Italian restaurant the night before he would be on the roster for a game at Wrigley Field. Boggs was extremely superstitious and he had many other rituals. He was not Jewish, yet before he entered the batter’s box, he would draw the Hebrew symbol “Chai,” in the dirt with his bat. “Chai” represent luck and life. If Turk Wendell were pitching, he would eat exactly four sticks of licorice between innings.

Before he would go into the dugout, Joe DiMaggio ran from his position in the outfield and touched second base, an important ritual that enabled him to be a great champion. And the Phillies! It had long been thought that if the Philadelphia Phillies won a World Series there would be a recession. A World Series win by Philadelphia is considered to be a historically dependable indicator of a difficult economy.

And there is proof! When the Phillies were called the Athletics back in 1929 and 1930, they became world champions. Look what happened! The Great Depression. They won in 2008 and there was the Great Recession.

We can heave a sigh of relief this year as the Houston Astros defeated the Phillies. And so our economy is a tad safer. Whew!

The goat? My beloved Cubbies were involved with the famous Curse of the Goat.

William Sianis was the owner of the Billy Goat Tavern in Chicago.

In 1945, the Chicago cubs were locked into a World Series with the Detroit Tigers. Sianis bought two tickets, one for himself and another ticket for Murphy, his goat. However, overly sensitive people complained that Murphy smelled and so Sianis and Murphy were ejected. Sianis shouted, “You are going to lose this World Series and you are never going to win another world series again.” Of course, the Cubs lost.

In 1984, Sam Sanis, nephew of William, brought a descendant of Murphy’s to the national league playoffs and proclaimed, “The Curse is lifted.” Didn’t help. 2008 playoffs and James Greanias, a Greek orthodox priest spread the dugout with holy water. Didn’t help.

And finally, in 2016, the Curse of the Goat was broken…because I ignored the championship series completely.

And now I await a thank you note from the great Chicago Cubs.