HEARTBROKEN Cristiano Ronaldo keeps his tragic son’s ashes in a chapel at home and talks to him “all the time”.

Cristiano Ronaldo sat down for a sensational interview with Piers Morgan[/caption] Ronaldo and Georgina Rodriguez posted this photo announcing they were expecting twins, but one sadly died[/caption]

Ronaldo told TalkTV’s Piers Morgan he keeps his son’s ashes alongside those of his father.

“I talk with them all the time and they are on my side,” he revealed.

“And it’s something that I am really proud of… the message that they send me, especially my son.” 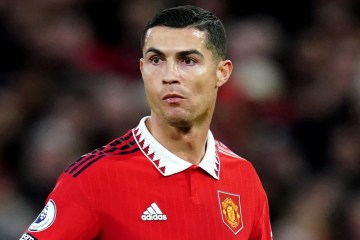 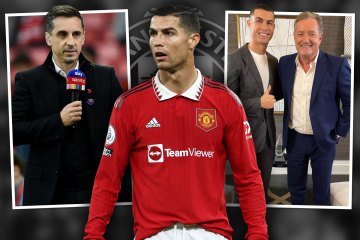 Ronaldo also revealed his confused children asked: “Where’s the other baby?” when his fiancée returned home with just one twin.

The footie legend wept as he told TalkTV’s Piers Morgan how the family had gathered excitedly to welcome the new arrivals after Georgina Rodriguez gave birth on April 18.

But while the couple’s daughter Bella was born healthy, her brother Angel never made it.

And he revealed how he cried with his eldest, Cristiano Jr, 12, as he broke the news in his bedroom.

But his younger children — Eva and Mateo, five, and  Alana Martina, four — took longer to process the news, he said.

He told Piers: “The other ones in the beginning, around the table, the kids start to say “Mom where is the other baby….’ …and after one week I say let’s be up front and let’s be honest with the kids, let’s say that, Ángel, which is his name, he go to the Heaven.”

He said: “The kids understand, we had shouts around the table and they say “Daddy I did this for Ángel” and they point to the sky. Which I like the most because he’s part of their lives. I am not gonna lie to my kids, I say the truth, which was a difficult process.”

Watch ‘Piers Morgan Uncensored:90 Minutes with Ronaldo ’, 8pm on Wednesday and Thursday on TalkTV. Find TalkTV on Sky 526, Virgin Media 606, Freeview 237, Freesat 217 and Sky Glass 508, live and on demand on the TalkTV app, streaming services and at Talk.TV.

As the family mourned their loss, Ronaldo said it brought him closer to his children and  ex-Gucci store worker Georgina  who he met  at an event in Madrid in 2016.

He added: “In some way, I became more of a father, more friendly with them; they become more close to their daddy, and me with Georgina as well.”

Piers asked: “I was going to ask you that because these things can make or break relationships.

“Because the grief can be so intense, it can drive couples apart or bring them closer.”

Ronaldo responded: “In my case it was better. I became more friendly with Gio.  I was of course a friend but I feel more love for her and for my kids and I start to see life with a different perspective.

“It was the most difficult moments, the last six months, since my dad died.”

The Portuguese striker revealed he keeps the ashes of his son close, having created a chapel in the basement, where the remains of his dad Jose Dinis Aveiro — who died in 2005 from liver failure — are also kept.

Ronaldo and Georgina, 28, had revealed they were expecting a twin boy and girl in October 2021.

Speaking for the first time publicly about April’s tragedy,  Ronaldo said: “Piers, probably the worst moment that I passed through in my life, since my father die.. when you have a kid, you expect that everything will be normal, and you have that problem, it’s hard, you know, as human being, that I and Georgina we had quite difficult moments because we don’t understand why it happened to us.

“Was very, very difficult to understand what’s going… in that period of our life.”

He told how despite his grief, his hectic football schedule continued, and it was only the love of his family who got him through.

He said of Georgina: “We had the difficult moments but we said ‘Listen, we have more kids, we have one that was born, Bella that we have to be happy too’.

“It’s crazy. I tried to explain sometimes to my family and even my close friends.

“I say, I never felt to be happy and sad in the same moment. I never felt. It is hard to explain.

“You don’t know what to do to be honest. And of course I remember very well that I looked like — I don’t know the word to define what I felt in that moment.

“But it’s crazy feelings, it’s crazy emotional. But as I told you before, I have to   hold that we had at least Bella. One died and one survived, but it was, it’s difficult to explain.”

Before Georgina fell pregnant, Ronaldo was already a dad of four, with three of his children born to two surrogate mothers. He described Bella, now six months, as a “spectacular, beautiful girl” who the whole family is very proud of, adding: “I am so, so happy”.

Today24.pro
Billionaire investor Howard Marks touts a bargain boom as interest-rate fears grip markets - and predicts a surge in companies going bankrupt One of The Greatest Britons in History - Joe Calzaghe LAMB BUTTER Will Melt in Your Mouth! Ancient Food on the Silk Road! I make $1,000 a month by promoting Amazon products on social media. It only takes 5 hours per week — here's how I set up my side hustle.