A FASHIONISTA has revealed the results of her latest shopping haul from Primark after splashing out £200 and bagging loads of bargains.

Hannah May Farrow, who is on TikTok under the name @misshannahmayfarrow, couldn’t believe the selection at her local store, as she put jumpers, suits and accessories into her basket.

In a video filmed for her 2000 plus followers, Hannah started by saying: “I did a little bit of damage in Primark today – I spent £200.”

She then showed off her purchases, as she unpacked her bags in front of the camera – and she started off with her favourite purchase of the shopping trip.

Holding up a bright pink, mini handbag with a silver bow on it,which cost £9, Hannah explained: “So I had to show you this first as it’s the thing I’m most excited about.

“I actually nearly screamed when I saw this – how stunning is this? I can’t wait for all the Christmas parties and New Year’s Eve parties I’m going to go to.” 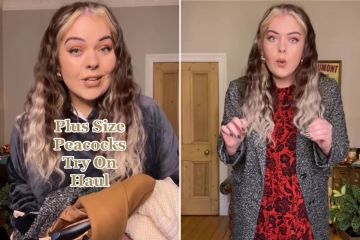 I’m plus size & did a massive Peacocks haul of coats, jumpers and dresses 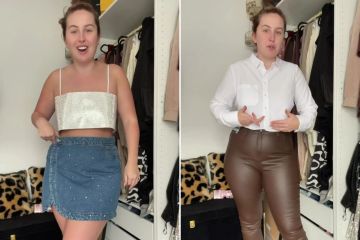 I'm a size 16 & did a Primark haul... some items were winners but others - flops

Going on to describe the accessory as “adorable” Hannah revealed she’d fallen so in love with it that she’d also bought it in black and blue as well.

Elsewhere in Primark, another section also caught Hannah’s eye and saw her buying more than one yet again.

She added: “I actually ended up getting three suits. I did not need three suits, but they were all just so stunning, I couldn’t resist.”

The three ensembles in question included a black and silver pinstripe trouser and blazer combo, which Hannah said scored a ten out of ten, a khaki green leather blazer teamed with a matching blazer, and a black and white checked one.

Other bargains Hannah took home included a fluffy crop top from the pyjama section in brown, and an oversized logo jumper in a size medium to wear with leggings.

She also showed her followers another oversized jumper, again in brown, some smart black trousers to wear both inside and outside of work and a strappy zebra print dress.

Her followers were quick to comment on her finds, as they said they were also a big fan.

One wrote: “I love, love, love this.” As another added: “The suit! Don’t tempt me, I already have too many.”

US to tighten noose around TTP, IS-K: State Dept

Tyrese Maxey back before Christmas?

Today24.pro
Anthony Joshua returns to America in search of new coach ahead of boxing return and links up with trainer Virgil Hunter Portuguese artist Santiago Ribeiro exhibit in Moscow Sam Bankman-Fried could face extradition from the Bahamas to the US: Here's how, legal experts explain The Darkest Secret and Tragedy of Edwin Valero