The Real Madrid star has been suffering with a muscular injury of late.

Since Madrid’s 3-0 win over Elche on October 19, Benzema has made just one substitute appearance for his club – a 26 minute cameo against Celtic earlier this month.

The reigning Ballon d’Or winner was named in Didier Deschamps 26-man squad for the World Cup, but appears to still be working his way back to full fitness.

According to RMC Sport, Benzema left today’s training session alongside a physio after just 15 minutes.

They add that he had not even touched a ball by the time he departed to do solo work. 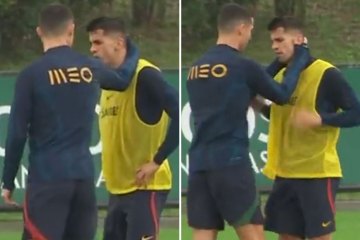 The rest of the squad all continued training, although Raphael Varane and Aurelien Tchouameni also did not finish the session.

Following the duo’s departure, Christopher Nkunku was then struck by a devastating injury that has subsequently ruled him out of the World Cup.

The RB Leipzig attacker was caught late in a 50-50 challenge with Eduardo Camavinga.

He immediately writhed in pain before limping off alongside team doctors.

Nkunku, 25, then underwent medical tests that have ruled him out of the tournament.

France are set to jet out to Qatar tomorrow.

They will kick off their campaign next Tuesday evening against Australia in Al Wakrah, before facing Denmark and Tunisia.

Today24.pro
New Honda Civic Type R review: Is it really better? How to deal with rejection How to Fall Asleep in 60 Seconds (OR LESS) EASY chili recipe for dinner #food