ASHLEY YOUNG is convinced England can win the World Cup — and has urged the country to get behind manager Gareth Southgate and the players.

A key member of the Three Lions‘ 2018 team that made the  semi-finals in Russia, Young believes criticism of Southgate is “bulls**t” and claims the booing of Harry Maguire has been “borderline bullying”.

Manager Gareth Southgate and centre-back Harry Maguire have both come under ‘ridiculous’ flak, according to Ashley Young[/caption] Villa veteran Young is urging England fans to ‘get behind every single player’[/caption]

The Aston Villa veteran, included in the provisional 55-man squad for Qatar, has told the nation’s fans to prepare for an incredibly successful tournament run, which starts with Monday’s opener against Iran.

Young, 37, told SunSport: “There is something special coming from this England team. The country has to get behind them.

“Get behind every single player. Don’t single them out. Get behind all of them to go out and win  this tournament.

“From the time Gareth has taken over, he has made a difference. These players will be more than ready. 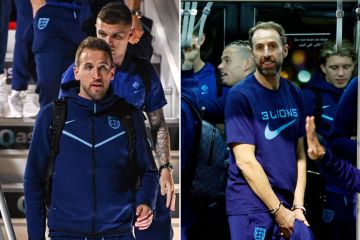 “With the way the Euros went, I give us every chance of going to the tournament and winning it.

“The criticism Gareth Southgate is getting is absolutely ridiculous. It  is bulls**t.

“Because he has not taken a team into the latest final of the Nations League, people think that he should be criticised.

“Of course, going into a  tournament you want to be winning games. But Gareth has totally changed what it is like to be with England.

“In previous years, under other managers when I was there,  players were pulling out because they did not enjoy it.

“They were not injured. Gareth has managed to get the nation together.”

Young, who has 39 caps, has also backed under-fire former United team-mate Maguire to star despite his torrid time at Old Trafford.

He said: “You are going to be criticised because you are captain at one of the biggest clubs in the world. But the criticism he is  getting has gone too far.

“But he is a  strong character and can deal with it.”

Young is the ultimate proof that no player should ever give up on his international dreams.

James Maddison and Callum Wilson landed in Doha for World Cup duty yesterday despite neither featuring for England in three years.

Marcus Rashford is also back, even though his last kick for England was a missed penalty in the Euro 2020 final against Italy 16 months ago.

After an absence of four years and two months, Young was recalled by Southgate for a friendly against Brazil in November 2017.

Despite not featuring in any of the qualifiers for the 2018 World Cup, Young enjoyed the best few weeks of his career, playing at left wing-back during that joyride to the semi-finals in Russia.

Young recalled: “It was  amazing to be involved with England again.

“When you are not called up for four years, the chances of you getting a call-up to go to one of the  biggest tournaments in world  football is pretty slim.

“I am one of those people who never says no. I never retired.

“It is always a boy’s dream to  represent their country — but to do it on the biggest stage at the World Cup . . . I don’t think words can  actually describe how I felt.

“Just getting that recognition was incredible, then the tournament was just unbelievable.

“I had been in  previous squads. The Euros in 2012 was tough, at times. Different  managers had been in there and with the players, there was a club divide, a north-south divide.

“Under Gareth, it was all so  different. Everyone was sat with each other, talking. There were no people on their own. Everyone’s hotel doors were open and there were no cliques at all.

“It was an amazing group. So much talent. It was Gareth’s first tournament and he was a manager that wanted to prove he could take this team to the  next level.

“As soon as we got to Russia, that feeling spread to the squad and we thought we could do something special.

“The FA staff made our hotel in Russia so homely with lots of nice touches.

“These hotels at a tournament can often be boring but not this place. Gareth also let our friends and family visit.

“Also, there was a camaraderie between the press and the players and I had not seen that before.

‘KILLS ME TALKING ABOUT IT’

“After the first game against Tunisia, H (Harry Kane) scored that late winner and it was like ‘you know, this could be the tournament’. We went on to do so well.”

Young turned 33 just two days before the semi-final, which England lost 2-1 to Croatia after extra-time.

It was his 39th and final international appearance and his voice starts to crack with emotion when talking about the clash in Moscow.

“I know how good an opportunity we had as a group. We were naive in the second half.

“After the tournament I said to Gareth: ‘I will never rule myself out playing. I know you will go with younger players and I totally agree.

“I am not retiring so if you ever need me, if you ever want to recall me, you can do, as long as I am playing well. It is down to you’.”

Even though he was not a serious contender to get into Southgate’s final 26 for Qatar, Young was included in the 55-man squad.

He added: “To get in this 55 for Qatar shows you I must have been doing something right.

“I was joking with someone from the FA who messaged me about the squad. I was like ‘This has to be a joke, surely?’

“I will retire from international football when I retire from football. I can still play at the highest level.

“I always say to players, just never give up on your dream — I never gave up.”

Today24.pro
One of The Greatest Britons in History - Joe Calzaghe Billionaire investor Howard Marks touts a bargain boom as interest-rate fears grip markets - and predicts a surge in companies going bankrupt LAMB BUTTER Will Melt in Your Mouth! Ancient Food on the Silk Road! I make $1,000 a month by promoting Amazon products on social media. It only takes 5 hours per week — here's how I set up my side hustle.