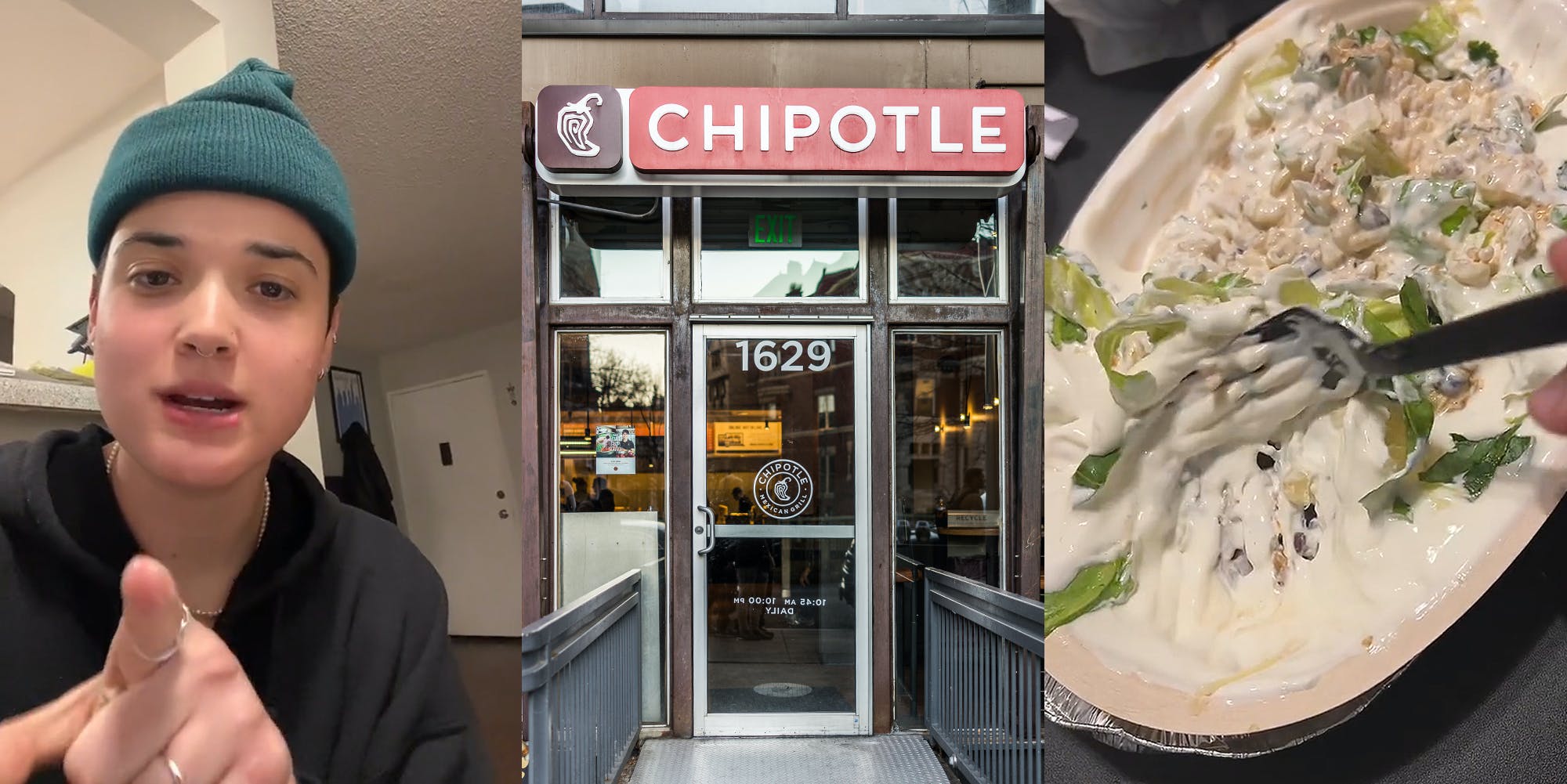 A TikToker hilariously called out Chipotle after receiving a meal that many would not consider edible.

“I want to know why the Chipotle worker who made my bowl hates me. I wanna know what I did. What did I do to deserve this?” @emgwaciedawgie asks her viewers.

She then turns her camera to a burrito bowl completely drenched in sour cream. There’s so much sour cream in this thing that the only other identifiable ingredients are hints of lettuce and maybe some sort of rice. Brown rice? White rice? Doesn’t matter; everything in this bowl is white now.

@emgwaciedawgie what did i do to hurt you baby what’s wrong talk to me @Chipotle ♬ original sound - emgracedawg pt.2

“They said, ‘Go fuck yourself,'” the TikToker continues. “That’s what they said with this. They were like, ‘Oh actually, you’re going to have the worst night of your life tonight. IBS who? IBS you.’”

@emgwaciedawgie went on to joke that, because she’s a lesbian, destroying her food so thoroughly was probably homophobic.

“This doesn’t feel very LGBTQIA ally,” she says. “It’s not funny. This is actually the least funny thing I have ever seen in my life.”

While the TikToker was clearly able to make light of being so disappointed in her food, viewers were pretty horrified.

“When you started digging into the layers of sour cream i lost it,” wrote @urlocalsapphicjew.

“At that point I’m getting in my car and getting answers even if I originally got it delivered! I’m not taking the L on this,” @brokencinema claimed.

“I had a similar experience with cream cheese at Dunkin’ Donuts in 2013 and I’ve never fully recovered,” added @kandacelg_3.

Several users expressed having similar experiences with sour cream at Chipotle, with one saying, “now I always just order it on the side bc I was traumatized.”

"No bc sometimes chipotle workers are so sarcastic when they make the bowls like… who hurt you babes," @haileeboyer1 wanted to know.

There are many ways to eat a Chipotle burrito bowl, but for most people, it seems safe to say this very much is not one.

The Daily Dot reached out to @emgwaciedawgie via Instagram message.

The post ‘No bc sometimes Chipotle workers are so sarcastic when they make the bowls’: Chipotle customer receives ‘sour cream soup’ in bowl appeared first on The Daily Dot.

European leaders themselves pushed the EU to collapse

Today24.pro
Billionaire investor Howard Marks touts a bargain boom as interest-rate fears grip markets - and predicts a surge in companies going bankrupt ‘How many Uber drivers does it take to pick up a disabled person?’: Disabled person says 3 Uber drivers canceled on them because of their service dog I'm convinced Facebook Marketplace is Meta's best feature after I furnished my new apartment with used furniture Goldman issues stock market warning