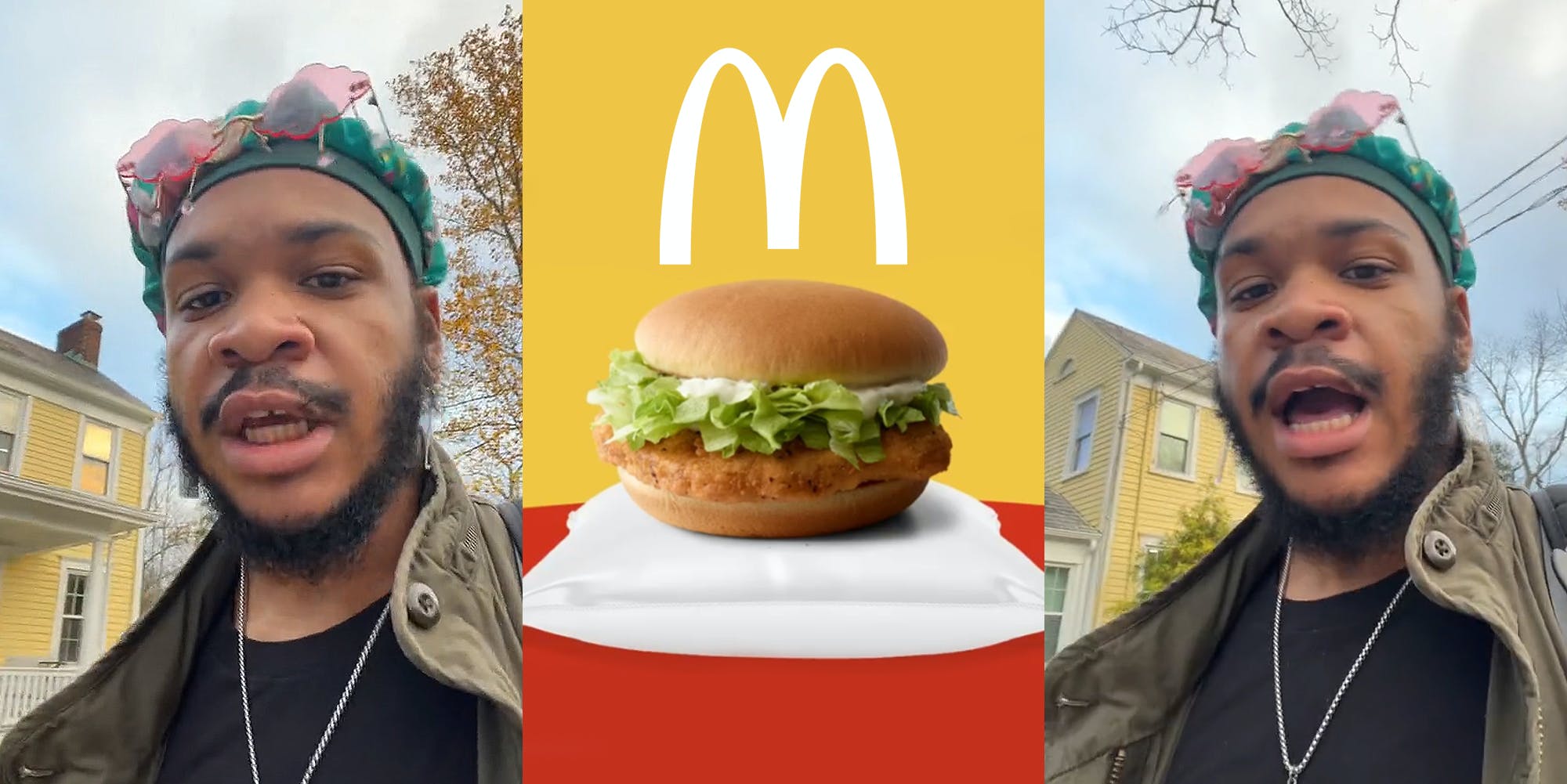 A McDonald's customer went viral on TikTok after sharing a rant against its pricing of the McChicken sandwich, which he remembered as part of the chain's dollar menu.

The TikToker, Shy (@oatmilkoni) says that he walked an hour and 15 minutes to go to Mickey D's to buy the sandwich thinking it would be the cheapest item to order off the menu. He used his story to highlight how good "boomers" had it and sparked a debate on the impact of inflation on fast food prices.

"I just walked an hour-fifteen to the nearest McDonald's in my area because I only had thirteen dollars and something cents to my name," Shy explains. "My thought process was, well, since we barely have any money anyways, let's just go to McDonald's cause it's cheap. Little did I know how unfunny that joke would end up being because I didn't know I was joking."

After finally arriving at the McDonald's location, the TikToker says he was appalled by the $2.99 price for a McChicken.

"These motherfuckers said '$2.99,'" he says. "Huh? Now, I told you we have thirteen dollars, we had enough for four McChickens solid."

He adds that he remembers the price of the chicken sandwich as being over a dollar less than the current cost.

"The last time I checked I was in high school a McChicken was $1.70," Shy claims. "And in college, it was about $1.69. And all that reminds me of is how many people have gotten on here to talk about how good boomers and gen X-ers really had it back then. McDonald's went from easily accessible slop to that expensive sloppay. This is my adulthood, trying to order the cheapest item on the menu. You got McDonald's money, now you don't!"

Throngs of TikTokers agreed that McDonald's is no longer considered a "cheap" food option.

"I gave up on McDonald’s for cheap food. Wendy’s Big Bag for $5," one user said.

However, there were a lot of other folks who stated that Mickey D's can very well be a cheap way to get food if one is diligent in using the McDonald's smartphone app on their purchases. With points, app-only coupons, and deals, the days of the dollar menu (or close to it) can be had again, according to many viewers.

"It's insane," one user wrote. "Try to only order through the apps if you need to get fast food, the pricing and deals way better. my go to is the 5$ cravings box from tb."

But there were still plenty of other folks saying that it's way too expensive to eat at McDonald's.

"I used to get a small lunch from McDonald's with 1/4 of my minimum wage working hourly. now it's 1/2 and I'm making twice as much as I did back then," a second claimed.

Between 2021 and 2022, Money Geek has reported that there has been an average 9% increase in prices across all major fast food franchises. There have been marked cost hikes across all industries in the United States under the Biden administration, especially post-COVID. Inflation hit a 40-year-high in the summer of 2022.

The Daily Dot has reached out to Shy via TikTok comment and McDonald's via email for further information.

The post ‘McDonald’s went from easily accessible slop to that expensive sloppay’: Customer criticizes $2.99 price for McChicken appeared first on The Daily Dot.

Trump is 'likely' to be 'front and center' of the January 6 criminal referrals: CNN's Jamie Gangel

How many kids does Kenan Thompson have?

Today24.pro
Anthony Joshua returns to America in search of new coach ahead of boxing return and links up with trainer Virgil Hunter Why the power grid is an 'attractive target' for domestic terrorists: report In the age of megachurches, communion has become a big business Hans Niemann in the sole lead at the 3rd El Llobregat Open