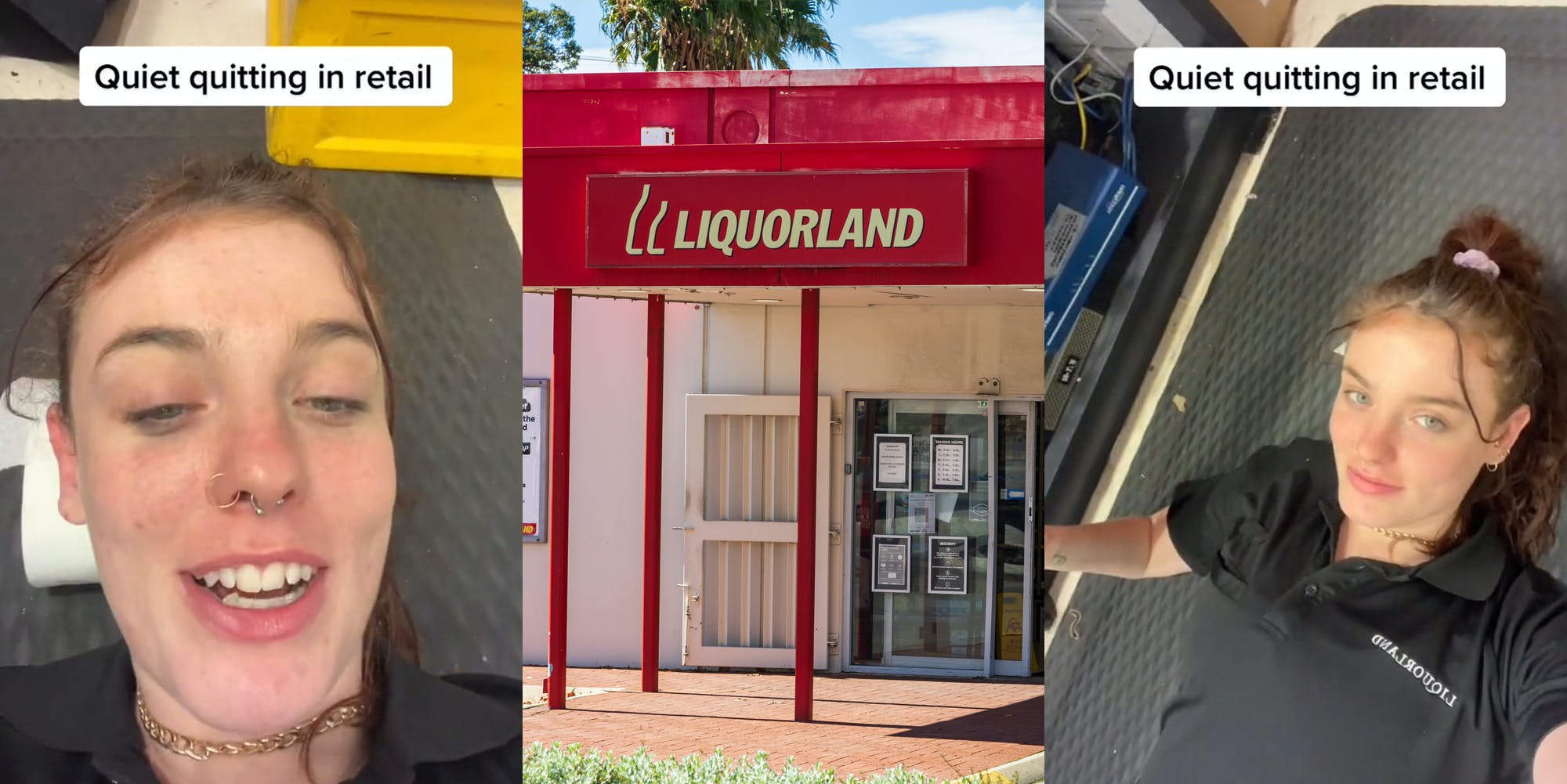 In a viral TikTok video, a Liquorland employee hops on the trend of "quiet quitting" by laying on the floor behind the store's counter and taking a nap while clocked in.

According to a September Gallup poll, at least 50% of the workforce consists of “quiet quitters,” or those who don't subscribe to the idea of going above and beyond for their jobs. The study also reports that while 32% of workers engaged at their workplace, 18% of employees feel detached from their jobs.

"Do you guys want to see some quiet quitting?" user @.kuhtreena asks her 16,000 followers. She then zoom the camera away from her face, revealing the TikToker to be laying behind the cash register at her job at Liquorland. She's using a roll of receipt paper as a pillow.

“The shop is open right now,” @.kuhtreena says. “This is the quietest quitting you can ever see. I’m gonna take a nap.” The text overlay reads, “quiet quitting in retail,” while Evanescence’s song “Bring Me to Life” plays in the background.

The creator further shares her attitude toward hustle culture in the caption, writing, “the grind doesn’t stop but this bitch does.”

@.kuhtreena the grind doesn’t stop but this bitch does #wakemeup #evanescence #takeanaprighthere ♬ Bring Me To Life - Evanescence

The video racked up over 305,000 views as of Tuesday, with several fellow Liquorland employees voicing their empathy for @.kuhtreena.

“As a fellow liqourland employee…. same,” one viewer wrote.

“Ayooo fellow liquorland employee!! the amount of times ive wanted to do this lmao,” a second echoed.

“Low-key thinking of doing that rn lol,” a third agreed.

Others shared how they opted to quiet quit at their jobs.

“The number of hours I spent sitting on a milk crate in the cool room hungover when I worked at liquourland AHAHA,” one worker shared.

“I used to pretend I was cleaning out under the desk just so I could sit on the floor,” another revealed.

“I think I spend at least half on my shifts at Liquorland sitting on the yellow safety step,” a third said.

Some workers warned @.kuhtreena of the potential repercussions of her actions.

“My boss caught me sitting down. i suggest doing it in front of an open cupboard. lol,” one person shared.

“I sat down on the job for 5 minutes and a customer sent pictures to [corporate] to complain,” a second commented.

“i got fired for literally just having a 5 min break,” a third said.

The Daily Dot reached out to @.kuhtreena via TikTok comment.

The post ‘Do you guys wanna see some quiet quitting?’: Liquorland employee takes nap on floor behind cash register appeared first on The Daily Dot.

Today24.pro
Five ways struggling families can get free cash to help pay for food this Christmas In the age of megachurches, communion has become a big business Man repeatedly punched Columbia protester, knocking her out: NYPD Best Android app 2022 – Google reveals top pick for the year and it’s totally free