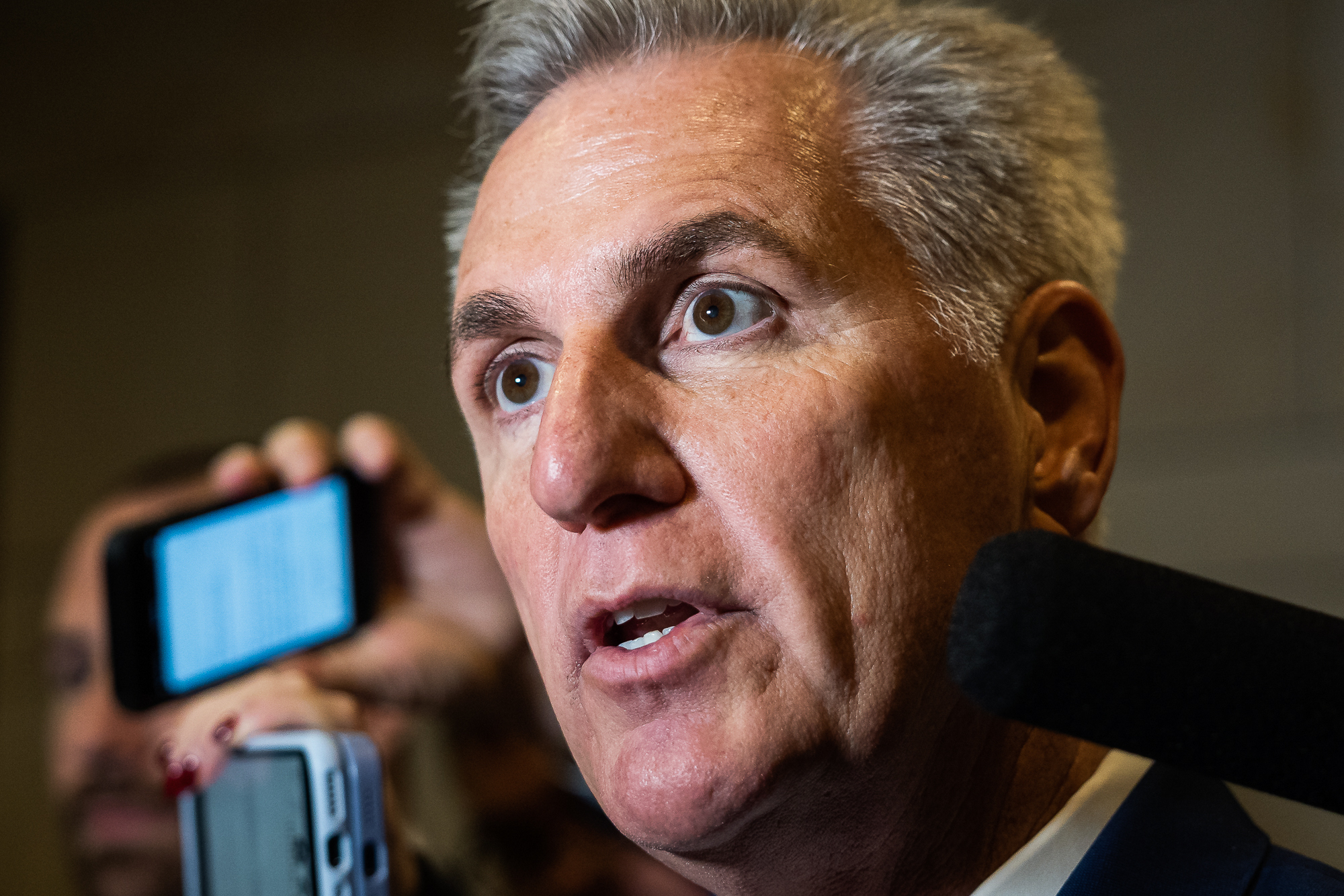 House GOP campaigns chief Tom Emmer on Tuesday prevailed in a fierce race for the No. 3 leadership post in a majority that Republicans are one midterm election victory from formally claiming, despite facing opposition over this month's narrower-than-expected victories.

The Minnesotan defeated Republican Study Committee Chair Rep. Jim Banks (R-Ind.) on the second ballot after edging Chief Deputy Whip Drew Ferguson (R-Ga.) by one vote during the first round of secret balloting in the battle to be majority whip next Congress. It caps off months of bitter jockeying for the House GOP’s highest open leadership role in years.

The whip victory represents a reward of sorts for Emmer, who headed the National Republican Congressional Committee for the past two cycles. Both saw Republicans gaining seats, but this year’s win was a massive disappointment for a party that projected winning an additional 20 to 30 seats. Despite some members arguing that the discouraging midterm threatened Emmer's prospects, he had already secured enough support from members who said he deserved credit for both cycles.

Emmer’s win also shatters a perceived conference curse: That NRCC chairs can’t move to higher roles in leadership, despite successful results at the ballot boxes. His victory at the closed conference meeting followed a 188-31 vote by House Republicans to nominate GOP Leader Kevin McCarthy for speaker over challenger Rep. Andy Biggs (R-Ariz.), whose candidacy was pushed by the Donald Trump-aligned House Freedom Caucus.

The win, met with raucous applause according to five people in the room, came as hardliners sought to convey that their bloc of McCarthy skeptics is large enough to keep the GOP leader from the 218 votes he needs to become speaker come Jan. 3. And while the nomination marked a success for the California Republican, his trouble is far from over as he courts the necessary votes before the start of the new Congress — with Freedom Caucus members still demanding concessions that would weaken his hold on the conference.

“We're going to elect a Republican speaker, and if that's tumultuous so be it," said Rep. Darrell Issa (R-Calif.). "But at the end of the day, Kevin McCarthy has the vast majority of members committed to him."

Yet there are already concerns among Republicans across the ideological spectrum that failing to rally around the right leaders will leave them further weakened against a stronger-than-expected House Democratic minority and a Democratic Senate. Freedom Caucus members like Rep. Clay Higgins (R-La.), who is declining to say if he would back McCarthy, said the next GOP speaker will have to reflect a conference that has moved to the right.

“The Speaker of the House, whomever he or she is, will be required to recognize the center of gravity of the conference itself. And the Freedom Caucus has moved that center of gravity to the right,” Higgins said, criticizing past Speaker Paul Ryan for cutting bipartisan deals that were not “reflective of the deepest core principles of the American people.”

On the other side, Rep. Marjorie Taylor Greene (R-Ga.) — a McCarthy headache in the past — whipped members to support the California Republican, arguing that dragged-out divisions could mean a Democratic candidate for speaker could pull an upset.

“If we don’t unify behind Kevin McCarthy, we’re opening up the door for the Democrats to be able to recruit some of our Republicans,” Greene said, adding that there was a “spirited discussion” with “some of my closest allies and I’ve been talking to them a lot.”

The election for House GOP conference chair ended in victory, 144-74, for New York Rep. Elise Stefanik, who currently holds the spot and was widely favored to prevail against Rep. Byron Donalds (R-Fla.). A Freedom Caucus member who challenged Stefanik from the right, Donalds didn't go down quietly — colleagues reported a feisty candidate forum on Monday.

Donalds sought to distinguish himself from the moderate-turned-MAGA New York Republican, touting his fundraising as well as his appeal to different voters as one of the two current Black House Republicans. His performance was met with mixed reviews, with some lawmakers saying he projected strength and others arguing he came off too aggressive.

Stefanik, the top-ranked woman in elected congressional GOP leadership, has silenced many conservatives who were critical of her past moderate voting record. Her colleagues have credited her for alleviating the headaches that came with Trump-critic Rep. Liz Cheney (R-Wyo.).

During the candidate forum, Stefanik fielded a question from Freedom Caucus member Rep. Bob Good (R-Va.) about her pledge to stay in the position for only one term, telling the room of GOP lawmakers that she initially wanted to seek a committee gavel before colleagues encouraged her to run for a second term. It’s a signal that Stefanik’s team is looking to rewrite the narrative on that front, as her office has denied the one-term pledge.

McCarthy faces a tougher path, however, as his quest for the House gavel is just getting started. While he's expected to win the party nomination Tuesday, he still needs to find a path to 218 floor votes by the beginning of January. Though Biggs challenged McCarthy Tuesday, the Freedom Caucus put him forward as a symbolic alternative meant to demonstrate the Californian’s lack of unified support.

Instead, Freedom Caucus members view the next seven weeks as critical time to force McCarthy to the negotiating table or keep building support for a consensus challenger. The group is pushing for a laundry list of changes to rules that govern both the conference and the full House, including strengthening the ability to oust a speaker and greater representation on an internal panel that doles out committee posts.

“We just view it as another step in the process to figure out where we are going. … No one has 218 or a sufficient number, and then the question is what are we going to do to get there,” said Rep. Chip Roy (R-Texas) about what comes after Tuesday.

At least one Republican is already vowing to vote against McCarthy in January: Rep. Matt Gaetz (R-Fla.), who has floated electing Rep. Jim Jordan (R-Ohio) as an alternative. Depending on how narrow the GOP majority ends up, McCarthy can only afford to lose a handful of members in the full floor vote.

But any shift by McCarthy toward the Freedom Caucus is likely to cause problems with the center of the conference, where governing-minded members can also leverage a razor-thin majority and are emphasizing the importance of bipartisanship.

“I believe this is rather a prime moment for the Problem Solvers and Main Street GOP to make an important impact,” said Rep. Don Bacon (R-Neb.), a moderate leader in the conference. “If we work in [a] bipartisan manner, we can hit singles and America wins.”

Some hardliners are taking the temperature of moderate Republicans on the speakership as centrists increasingly feel left out of the McCarthy-Freedom Caucus negotiations. One Republican familiar with the matter said Jordan and Gaetz have started talks with moderate Rep. Dave Joyce (R-Ohio), the head of the Republican Governance Group.

Some hypothesized that moderates coming together could be a threat to McCarthy’s bid, as they might team up with Democrats. Bacon shot down that idea.

“I believe we will get to 218 and that it will be Kevin,” the Nebraskan said.

Inside the most luxurious car park in the world where robots park your motor and spaces cost £250,000

Storms cause major tornadoes, flooding around the South

Today24.pro
‘How many Uber drivers does it take to pick up a disabled person?’: Disabled person says 3 Uber drivers canceled on them because of their service dog I make $1,000 a month by promoting Amazon products on social media. It only takes 5 hours per week — here's how I set up my side hustle. Billionaire investor Howard Marks touts a bargain boom as interest-rate fears grip markets - and predicts a surge in companies going bankrupt Crypto Lender Matrixport Raises Valuation to $1.5B Despite FTX Collapse