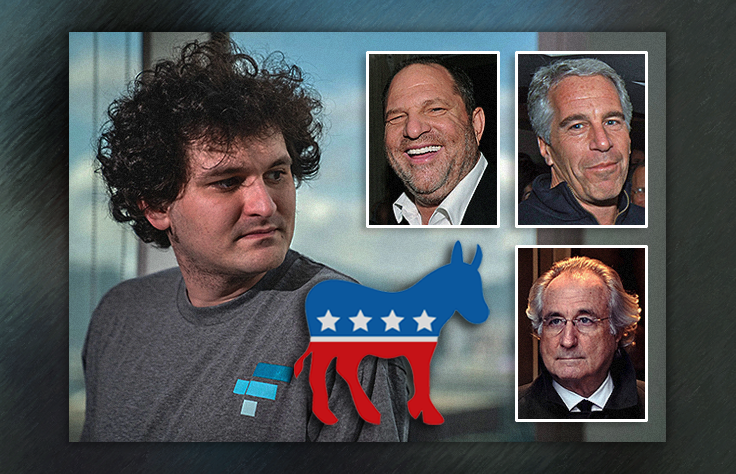 "If I have seen further it is by standing on the shoulders of giants." — Sir Isaac Newton

What happened: Sam Bankman-Fried, the digital guru who earlier this year pledged to spend as much as $1 billion in support of Democratic candidates, is under federal investigation after the cryptocurrency exchange he founded declared bankruptcy amid accusations of fraud and financial mismanagement.

Why it matters: Bankman-Fried is the latest in a long line of Democratic megadonors to be accused of egregious criminal acts.

• $5,700,000 — The amount Bankman-Fried, aka "SBF" or "the next Warren Buffet," donated to President Joe Biden's campaign and other Democratic-aligned entities in 2020.

• $40,000,000 — The amount SBF donated to political candidates and committees during the 2022 election cycle, the vast majority of which were aligned with the Democratic Party.

The Democratic Party Hall of Dishonor:

Assuming he is ultimately charged and convicted of orchestrating a financial scam, Bankman-Fried will live in infamy alongside the following Democratic megadonors of degenerate disrepute—the giants upon whose shoulders he once stood.

• The once-beloved Hollywood mogul donated almost $600,000 to Democratic candidates and committees since 2000, and hosted a number of celebrity fundraisers for Barack Obama and Hillary Clinton.

• Serving a 23-year sentence for rape and currently on trial for multiple sex crimes. Reporting suggests Weinstein's atrocious behavior was an open secret in Hollywood. The serial offender routinely exploited his influence among Democratic politicians and their allies in the media to bury stories about his predatory behavior. In 2017, Weinstein reached out to Anita Dunn, a senior adviser to President Joe Biden, for "damage control advice."

• The prolific pedophilia aficionado donated more than $150,000 to Democratic candidates and committees, including a $10,000 contribution as recently as 2018, several months before his arrest on sex trafficking charges.

• He courted prominent journalists, cavorted with liberal billionaires, and wrote checks to Ivy League universities. Former president Bill Clinton took several trips on Epstein's private jet, aka "The Lolita Express." (Not to be confused with Democratic megadonor Ron Burkle's private jet, aka "Air F—k One," on which Clinton has also flown many times.)

• The sex criminal "hanged" "himself" in his jail cell in 2019. Earlier this year, his female accomplice Ghislaine Maxwell received a 20-year sentence for sex trafficking. She was among the prominent figures who attended Chelsea Clinton's wedding to failed hedge-fund manager Marc Mezvinsky in 2010.

• The longtime liberal activist donated more than $500,000 to Democratic candidates and committees.

• Buck was sentenced in April to 30 years in prison for luring young men to his home, sexually assaulting them, and (in at least two cases) injecting them with a fatal dose of methamphetamine. Federal authorities described Buck as a "violent, dangerous sexual predator" who exploited "vulnerable victims—men who were drug-dependent and often without homes—to feed an obsession that led to death and misery."

• Madoff defrauded his investors, including several prominent charities, of nearly $65 billion while orchestrating the largest Ponzi scheme in history. He pleaded guilty to 11 felonies in 2009 and was sentenced to 150 years in federal prison, where he died in 2021.

It's almost as if there is a pattern…

The post Sam Bankman-Fried Is Not Alone: Some of History’s Greatest Monsters Were Democratic Megadonors appeared first on Washington Free Beacon.

Today24.pro
It's not just you. Disney's CEO reportedly thinks its theme parks have gotten too expensive. Crypto Lender Matrixport Raises Valuation to $1.5B Despite FTX Collapse I'm convinced Facebook Marketplace is Meta's best feature after I furnished my new apartment with used furniture ‘How many Uber drivers does it take to pick up a disabled person?’: Disabled person says 3 Uber drivers canceled on them because of their service dog