A LOT of people end up forking out a fortune on expensive make-up and skincare brands.

But one beauty fan has shared how she’s been extra savvy and bought every item she needed  from Poundland – and she couldn’t believe the results.

TikTok user Alicia Land, aka @makeupbyaliciall, visited her local Poundland store to check out their make-up selection and let her followers in on the secret.

“I’ve got the receipt here and I did manage to get a full face of make-up – apart from brows, I didn’t get a brow pencil or brow powder.

“The reason being the shades did not look good. The brow powders looked purple, even in the blonde section, so I thought, ‘we’re going to leave that for today.’

Read More in Make Up 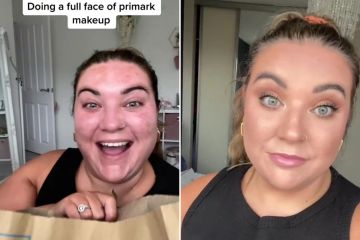 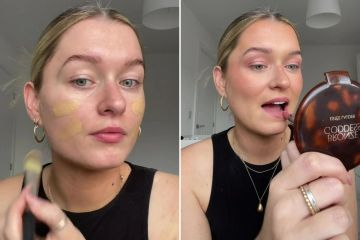 I tried Aldi dupes, including its £2.99 version of the Pillow Talk lippy

Alicia then went on to do her live review, applying each product one by one and giving her verdict.

First up, she used their “super affordable” £3.50 Hydrating Primer, infused with Vitamin E, as a base.

She said: “It feels nice and refreshing, actually. Quite cooling on my skin, which is lovely.”

Alicia continued to say that while it smelt “a bit funky,” it felt “really, really lovely on the skin” and effectively “blurred her pores”.

She added that the real test would be when she put the £1 foundations on top of it, as she explained she’d bought two as she wasn’t sure what her shade would be so decided she would mix them together.

After pointing out that there are “barely any shades” and that they appeared to be different consistencies, Alicia continued: “I’ve put it on my foundation brush, as I usually do.”

She then used a sponge to blend it in further and said: “Why does that look so nice?!

“Why does that look so beautiful? I’m very impressed with that! That looks absolutely gorgeous. Wow.”

Alicia was equally complimentary when it came to the £1 concealer, as she described it as “so good” and almost like a serum.

The next step in her make-up transformation was adding powder, which she bought in two shades.

She added: “What’s going on? That is pretty, pretty good. This has certainly impressed so far.

This has certainly impressed so far.

Alicia also hailed the £1 Matte Bronzer as “stunning” and just like the Benefit Hoola Bronzer.

Meanwhile she said that the Supersoft Blusher duo was so much better than she expected and “really hits”.

She was similarly blown away by the eye products, including a “beautiful” eyeshadow palette which she gave a ten out of ten, and the budget store’s fake eyelashes that cost £1.50.

Alicia later summed up her thoughts when she said she couldn’t believe the quality of the products.

She concluded: “The formula and the way they’re applying is absolutely fantastic. Really, really good.

“I feel like they could seriously make some moves with this make-up if they developed a lot more shades because this seems to be absolutely flawless.”

3 members of Twitter's Trust and Safety Council quit: 'Red lines have been crossed'