HE’s the king of the ring and now Tyson Fury rules the music studio too.

The Gypsy King has teamed up with male mental health charity Talk Club to release his very own version of Sweet Caroline.

He’s also hoping it can inspire the England football team in Qatar after they adopted the song on their run to the final of Euro 2020.

In the official video, available here for the first time, Fury takes to the studio to belt out the Neil Diamond anthem in his distinctive gravelly voice.

Wife Paris, 32, joins him in the sound proof booth – although she steers clear of getting on the microphone. 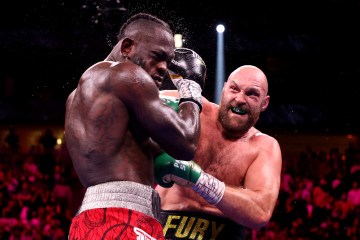 I'M ALL FOUR IT 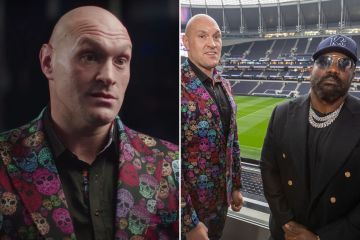 The two-time world champion is also joined by backing singers and various musicians for the cover version of the 1969 classic.

Fury, whose next fight is against Derek Chisora next month, has been an outspoken champion for mental health.

Having struggled with his own demons, the Gypsy King has regularly talked up the importance of the issue during his career and tried to break down the stigma surrounding it.

Fury taking to the studio should perhaps come as little surprise with the Morecambe resident having broken into song on many occasions after wins in the ring.

He memorably sang American Pie following his most recent victory over Dillian Whyte at Wembley Stadium and has also sung I Don’t Wanna Miss A Thing and Walking In Memphis to celebrate his wins.

Speaking about his debut single, Fury said: “Sweet Caroline is a record I’ve always loved, and I’m excited to record and release it, and thanks to the folk over at Warner Music, they’ve given me the opportunity to do that, and what better time to release it than around the World Cup!

“I’m also proud to be partnering with the team at Talk Club who do such amazing work, it’s a great opportunity for me to give something back to Mental Health and hopefully continue to raise awareness for a cause that’s really close to my heart and if it helps England along the way in the World Cup, well that’s an added bonus.”

Tyson Fury’s knockout version of Sweet Caroline is out now with all proceeds going to charity.

A woman claims a 'natural', TikTok-famous detergent brand caused her family to break out in hives, rashes, and respiratory infections — and now she's suing

How “zero-Covid” changed China — and the world

Today24.pro
Billionaire investor Howard Marks touts a bargain boom as interest-rate fears grip markets - and predicts a surge in companies going bankrupt One of The Greatest Britons in History - Joe Calzaghe I make $1,000 a month by promoting Amazon products on social media. It only takes 5 hours per week — here's how I set up my side hustle. RoboCV: stacker robot