PAIGE VANZANT has blasted ‘freaking stupid’ Instagram for deleting a photo of her gruesome arm injury.

The wrestler fired back “What is this BS!!!!” after a snap of her broken arm in stitches was removed for breaching social media guidelines.

The former UFC star, who is is more famous for posting glamorous bikini shots, is equally furious at Instagram’s suggestion she might need ‘support’ following her change of tack.

But the 28-year-old suspects her photos might have been erased purely due to someone mischievously reporting them.

In a follow-up post, she hit out: “What is this BS!!!!! Posting stitches in my arm? Really?

“Flagged for hate speech, violence and bullying???? It’s my broken arm. The next slide is the funny one. 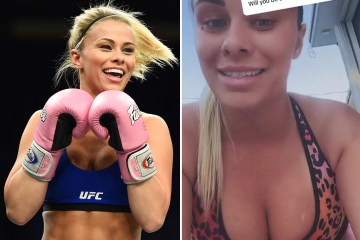 “Yeah I do need support. From IG to not be so freaking stupid.

“And I’m sure that someone ‘reported’ the pictures of my arm because it bothered them. Don’t follow me then.”

Many of Paige‘s followers rushed to her defence – but not all.

Some believe Instagram was just being cautious or a glitch meant her pictures were automatically seen as inappropriate.

Social media firms have come under pressure to tackle self-harm or graphic images.

So some fans reckon Paige was just the victim of over-zealous moderators who got the wrong end of the stick.

And one said of Paige’s outburst: “Some people on IG are so so soft! every little thing bothers them but the people running IG are the softest.”

The MMA favourite took a break from wrestling to return to bare-knuckle boxing.

But she was frustrated when a comeback bout in August was scrapped.

Paige also insists she is keep to compete again at MMA.

She told ESPN: “I do want to do MMA still and I do see my future in MMA.

“I’m 28 years old. I’ve just been fortunate enough that my career got kick-started at a very young age.”

Wikipedia again up and running as Pakistan lifts ban on site