“YOU can’t eat at everybody’s house” is a concept that has gone viral on TikTok.

One user confirmed this sentiment after she showed her followers her “feral” cooking hack.

TikTok user Steph Hopkins shared the unique method she uses for adding butter to a frying pan, and people are disgusted.

In her original video, Steph revealed that he guilty food pleasure is nibbling on a stick of butter.

She then followed up the revelation by posting a clip showing how she combined her weird food habit and her cooking skills.

“Wait, so do you have a separate stick for eating or is it just all the same?” asked one viewer. 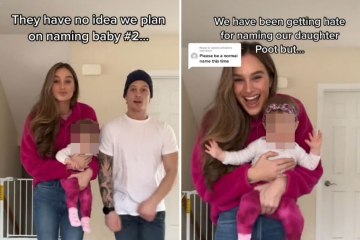 Steph clarified that she uses the same stick for snacking and cooking, and shared that it had to be the Kerrygold salted brand.

“So you get your butter out whenever you’re cooking, that’s when you have a few little nibbles because it’s delicious,” she said.

The TikToker then took a bite out of the butter and spit it onto her frying pan.

She revealed that the disgusting hack is her “favorite thing to do,” and said she never uses knives or tablespoons when cooking.

TikTok users took to the comments section of the video to share their thoughts on the strange habit.

“This is feral,” wrote one horrified viewer.

Another person said: “Some things aren’t meant to be shared on the world wide web.”

“Babe the butter knife is two drawers to the left,” joked another TikTok user.

A fourth viewer commented: “This is why you can’t eat at everyone’s house.”

HIV Prevention: New Injection Could Boost the Fight, But Some Hurdles Remain

What’s The Matter With KU Law?

Today24.pro
‘How many Uber drivers does it take to pick up a disabled person?’: Disabled person says 3 Uber drivers canceled on them because of their service dog Billionaire investor Howard Marks touts a bargain boom as interest-rate fears grip markets - and predicts a surge in companies going bankrupt RoboCV: stacker robot I make $1,000 a month by promoting Amazon products on social media. It only takes 5 hours per week — here's how I set up my side hustle.